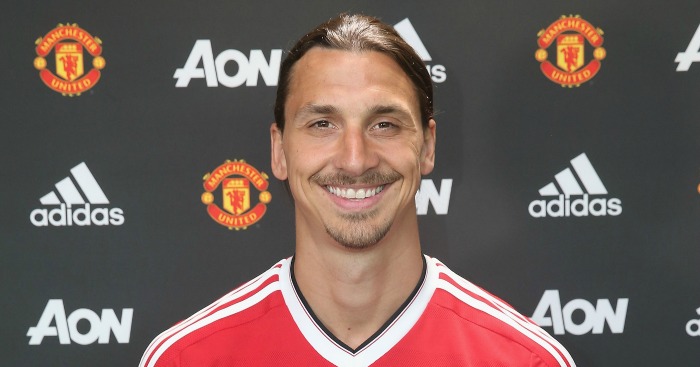 ‘Who wouldn’t want that kind of firepower?’ – Daniel Storey

In reasonably estimating that Ligue Un is an inferior league to the Premier League, there is a danger of overlooking just how fantastic Zlatan Ibrahimovic’s 2015/16 was. Thirty-eight league goals in 31 matches, with 13 assists just for fun. Fifty goals in all competitions! A career total of 392 goals in 677 games! Which side in Europe wouldn’t want that kind of firepower?

Do I expect Ibrahimovic to win the Premier League’s Golden Boot this season? No, and odds of 15/2 to do so seem remarkably skinny. But to judge him only by that parameter is incredibly harsh. There are doubts too about his age, but Paris St Germain medical staff marvelled at the Swede’s fitness. He’s far healthier than a 30-year-old Wayne Rooney blowing out of his arse in midfield.

Rather than worrying about Ibrahimovic old age, United are instead embracing it. With Anthony Martial and Marcus Rashford developing well but not yet fully mature, Memphis Depay struggling and Rooney dropping deeper, Ibrahimovic’s role is to set the example while easing the dependence on Martial. The striker’s tiresome uber ego actually covers up an on-pitch selflessness and a desire to assist younger players.

As former assistant manager Rene Meulensteen said: “Ibrahimovic is the perfect fit for Manchester United at this moment in time. They have young players in the dressing room and he is a leader, a winner.” You can’t argue with much of that.

The wage argument is ludicrous. No United fan worries about the Glazers spending their precious cash on the salary of a superstar player when they leveraged the club against their own debt to start with. The differences in the stakeholder interest of supporter and owner are almost diametrically opposite on that issue. ‘Spend what you can’ is the message to a rich benefactor.

‘It might just create more problems than it solves’ – Matt Stead

The Swede has not spent even a month at Old Trafford, and yet already his arrival has been justified to an extent. He is the marquee signing, the superstar, the statement. He creates headlines. He generates buzz. This suits both the player – he has the chance to fulfil his personal aim of winning titles – and the club – they sign a bonafide elite-level personality and restore some of the pride they have surrendered over the past three years. Oh, and they get him for a free.

To decide whether or not this signing will be a success, the criteria must be defined. How many goals is he expected to score? Twenty? Fifteen? Ten? How many more should he be expected to assist? Ten? Eight? Six? Should his presence propel United into the top four? That must be the expectation. Should he be a guaranteed starter throughout his minimum one-year stay? Can he not be, given his reputation, wage and ego?

The 34-year-old is undoubtedly in unbelievable health for an athlete of his age and build. But scoring 38 goals in a dominant Ligue Un side is arguably easier than scoring 20 in a Premier League team. Leading the line in a side which created 435 goalscoring chances in the league and outscored each of its opponents by at least 35 goals last season is easier than leading the line in a side which created 312 chances and scored fewer goals than nine other sides. Mourinho will endorse more expansive football than Louis van Gaal, but the players from the Dutchman’s reign have not changed.

Juan Mata created the most goalscoring chances of any Manchester United player in the league last season. He created 35 fewer than Angel di Maria did for PSG; Mata played almost 800 more minutes. Ibrahimovic excelled in more of an outright 4-3-3 formation in the French capital, enjoying support from attacking wingers such as Di Maria, Lucas Moura and Edinson Cavani. He was the perfect focal point, merging powerful hold-up play with explosive attacks of his own when needed.

At United, Ibrahimovic is likely to find himself in more of a reserved 4-2-3-1 formation, the same United used last season, and the one Mourinho utilised when leading Chelsea to the Premier League title in 2015. Here, there is a more of a reliance on the players supporting him. Do Mata, or, worse still, Wayne Rooney, provide the necessary pace, penetration and precision from the No 10 position? Are Jesse Lingard and Marouane Fellaini suitable foils for his talents? And is it worth sacrificing game time and central opportunities which would otherwise fall to Marcus Rashford or Anthony Martial? Ibrahimovic will find himself having to work harder and more often to create his own chances, and he must do so against more staunch defences.

In isolation, the signing was a no-brainer. In context, it might just create more problems than it solves for United. Mourinho is clearly content with his forward line after bringing in the 34-year-old, but his reputation masks the possibility that an attack led by Ibrahimovic with Rooney behind could be more static than ever. In between that and potentially alienating Martial – a player who represents the future, not the present at the club – this might not be the game-changing signing it is perceived to be. And with his reputation and stature, surely it has to be game-changing?