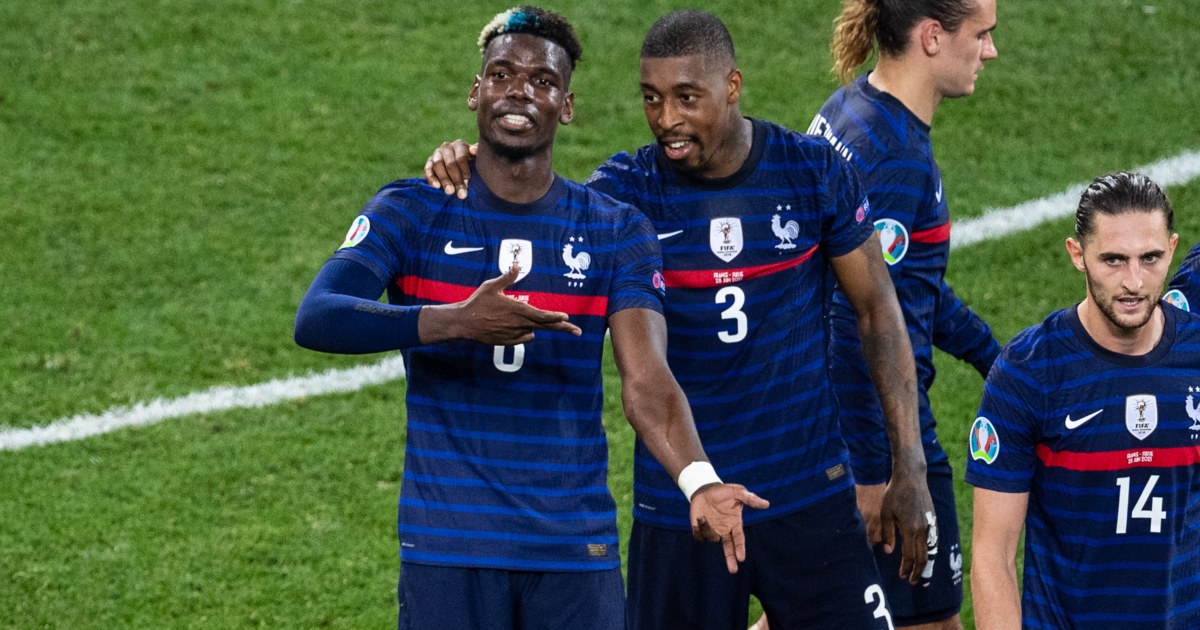 Embarrassingly for all concerned, two 365ers have their jackets off in the car park over Paul Pogba. Should we ignore his flaws to focus on the ridiculous talent?

Pogba caught the eye in France’s midfield with some exquisite passing and an incredible goal to put the world champions 3-1 up – a lead they blew thanks in part to Pogba’s error. And now they’re going home.

His overall performance once again divided the watching public. No player splits opinion like Pogba – should we allow him his foibles and simply focus on the generational talent?

Yes: The problem is with Man Utd, not Pogba – Will Ford
The last thing I expected to read this morning was criticism of Paul Pogba.

I know why there was – he got caught in possession for the Switzerland equaliser. But to pick out that one mistake – which wasn’t that bad – in the midst of some of the most beautiful midfield sorcery is maddening. He was sublime.

He scored a magnificent goal, made the most key passes (4), completed the most dribbles (5) and scored 9 out of 10 in the whoscored ratings. The stats would lead anyone without a Pogba vendetta to ignore the one blot on his copybook and marvel at a player who was so comfortably the best player on the pitch.

🏅 33 duels won, more than any other player

🏅 9 through balls, more than any other player

But here we are. For the record, I had already messaged Ian to tell him how much I enjoyed his take on the game before he politely asked for this fight. But I’d ask you, kind reader, to consider his United leanings on this matter.

It’s difficult to watch the same player who occasionally does something brilliant for your club, do those somethings brilliant far more frequently in another team. It’s as though he’s a different player; that’s tough to take. But this isn’t a Pogba problem. It’s a Manchester United problem.

Ole Gunnar Solskjaer predominantly used Pogba on the left of his front three for United at the end of last season. It’s absolutely not his best position, but the role he ‘can be trusted to play’. That’s the narrative – Pogba can’t be trusted to play in a midfield two behind Bruno Fernandes. But that’s because when it comes to N’Golo Kante and Fred, you’re comparing apples and vomit fruit.

Monday night admittedly didn’t provide the best support for this argument. But that was – and I can’t believe I’m about to criticise him – more to do with Kante having a bad game than Pogba.

Pogba had very little time and seemingly no notice before he was tackled for the equaliser, and Kante’s decision not to track the run of the goalscorer, Mario Gavranovic, was costly, as was Presnel Kimpembe’s woeful attempt at a tackle on the edge of the box. Kante’s inconspicuous nature often means he doesn’t get the credit he deserves, but also serves him well when the knives come out. Particularly when his polar opposite – the dancing, outspoken, self-proclaimed baller alongside him – provides such sweet meat to slice through.

If Kante had played well, we would not be having this fight, and the fingers of blame for Pogba’s intermittent United form would be pointed not at the player but squarely at the club as they absolutely should be.

And why doesn’t Pogba affect games for United as he does for France? Karim Benzema and Kylian Mbappe is why.

Their movement as soon as Pogba gets on the ball makes all the difference. United have got good forwards, but these guys are on another level entirely. And yes, you can make the argument that Pogba should be taking games by the scruff of the neck in the Premier League and dragging his teammates up to his level, but that really is nonsensical. If there’s no-one to pass to, what is he supposed to do? Dribble through the opposition and be castigated as Fred fails to deal with the fallout? No thanks.

There may be a case to suggest that Pogba’s attitude is better for France, but does improving that attitude not fall at least partly within the manager’s remit? Pogba clearly enjoys his time with the national side and has the utmost respect for Didier Deschamps. But that respect is earned, not gifted.

But he’s a professional footballer and he gets paid £15million a year. So what? There’s this bizarre assumption that footballers are these flat-pack commodities that are built in a certain way and should perform exactly as we expect them to, no matter the circumstances they find themselves in. Pogba is a wonderful footballer worth pandering to; his ability just needs to be harnessed and used properly.

If United can’t do it, another club will. And in fact, we might end up on the same page here for very different reasons. Please sell him and then we can all appreciate his genius, because I’m sick of seeing him wasted at Old Trafford.

No: Pogba could be a complete midfielder, but consistency is key – Ian Watson
Pogba was brilliant for all but a few seconds of the 120 minutes last night. The France midfielder pulled the strings for the world champions, capping a wonderful individual performance in an incredible game with one of the goals of the tournament.

But we can’t be pick and choose which contributions we ignore, especially since one ultimately denied France safe passage in normal time.

With 20 seconds of the 90 remaining and France 3-2 up, the No.6 briefly reverted from France’s Pogba to the Manchester United one. The pale imitation of the marauding midfield dynamo we have seen during the European Championships, the one we are accustomed to seeing in a Les Blues shirt, less so a red one.

Receiving a pass from Karim Benzema as France sought to wind down the clock, Pogba was pickpocketed by Christian Fassnacht on the perimeter of the centre-circle. Surrounded by three Swiss opponents, rather than bounce possession out to Moussa Sissoko on the right, Pogba opted to roll his foot over the ball towards his left. Fassnacht nipped in, dumped Pogba on the floor and suddenly, infuriatingly for Deschamps, France were left facing a five-versus-five which Mario Gavranovic ruthlessly capitalised upon to complete the day’s second stunning fightback.

That’s Kante’s fault, is it?

Benzema’s thought not and Benjamin Pavard’s frustration was aimed in Pogba’s direction too. Their exasperation was shared by Roy Keane and Gary Neville.

Pogba is certainly one of the game’s most perplexing characters and his performance last night was his career in microcosm: some incredible snippets of technical genius punctuated by costly moments of indiscipline. Neville felt Pogba lacked focus ahead of Switzerland’s opener too.

Perhaps what we read into Pogba’s performances, which of his characteristics we focus on, tells us more about ourselves than the player. Keane, Neville and Patrick Vieira cannot forgo his flaws and for that this morning they are painted as grumpy old men. Which may well be true. But they make a fair point about Pogba.

"I think if he played next to Roy, he'd be a different player. He needs somebody behind his back, putting him under pressure, being really demanding of him… it's frustrating because he can give much more than what he's giving to the team."@OfficialVieira discusses Paul Pogba pic.twitter.com/Xkd2j9utgx

We cannot judge his overall performance, which was largely magnificent, without the context of what occurred in the 90th minute. Especially when such lapses are commonplace at club level. For which some people have a weird aversion to pinpointing Pogba. Haven’t they, Sylvain?

Gary Lineker expressed his belief that Pogba’s sudden improvement upon playing for France is sparked by having players who ‘love to make runs and spin behind defences’ which, apparently, is seldom the case at United. Marcus Rashford, Mason Greenwood and Anthony Martial want a word, Gary. That’s basically their shtick.

Pogba explained that he enjoys more freedom at international level. Of course, any player would relish such liberty but playing in midfield comes with responsibilities, even if you have Kante to do the bulk of the dirty work. Certainly when Fred is to your right.

There is no getting away from the fact that Pogba too often shirks those responsibilities for United. It is too simple to blame the club for his inconsistency. Ole Gunnar Solskjaer has pandered to Pogba, as did Jose Mourinho until he could bear it no more, and the current boss has tried all manner of solutions to placate a player United are heavily invested in beyond just the record fee they paid Juventus five years ago. But since then, the Red Devils have failed to find a way to tease some consistency from their most technically-gifted star. It certainly isn’t for a lack of trying.

This summer is United’s final opportunity to make it work – assuming Pogba and his mate Mino want to. That, as has been the case for three years now, remains in serious doubt. The player and his agent’s bleating is behind some United fans’ resentment of Pogba, while others are willing to indulge him for as long as he produces moments like this. His is a complicated relationship with the club and its supporters.

In Pogba’s mind, it is simpler to play for France. And the fact he can turn it on upon demand speaks of his genius, generational talent. That he chooses to flick the switch rather than pursue the consistency that could make him an all-time great remains the biggest factor in his incredible potential remaining unfulfilled.