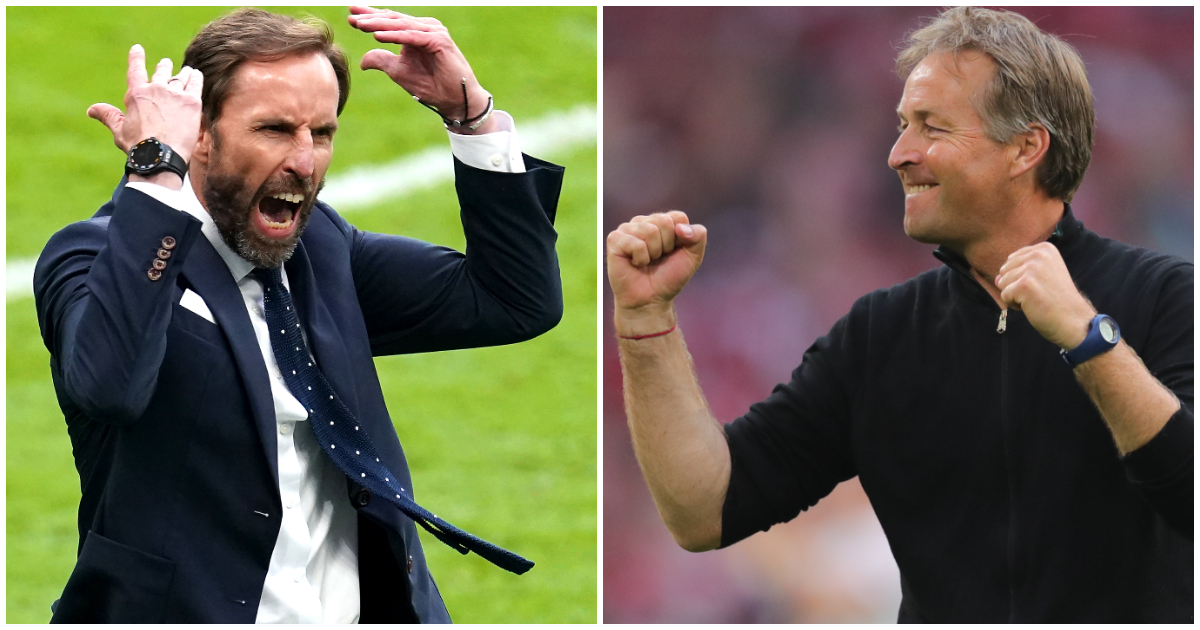 England play Denmark in the European Championship semi-final. Two F365ers are already in the pub, tanked up and scrapping over tactical blueprints scribbled on the back of a fag packet. Dignity, lads…

Ladies and gentlemen, England will be playing four-two-f*cking-three-one – Ian Watson
Unless Gareth Southgate fancies staring at yet another disappointing semi on Wednesday night. D’ya, Gareth? D’ya?

The simple reasoning might be ‘if it ain’t broke, don’t fix it’. Southgate reverted to a back four on Saturday night in Rome and Ukraine, playing 3-5-2, were blown away within an hour.

Back at Wembley, the expectation is upon England to assert themselves on the semi-final against the Danes, as it was against Ukraine, Scotland and Czech Republic. Opting for three at the back was easy to explain when faced with Germany and the threat of their wing-backs, and the temptation might be to do the same against Denmark, with Kasper Hjulmand usually preferring 3-4-3, especially in the wake of losing Christian Eriksen.

But this semi is not the time to be submissive, especially when Denmark’s centre-backs could shackle Harry Kane if England are too cautious. In any case, attempting to match up with Hjulmand could be a fool’s errand, since Denmark have demonstrated their tactical flexibility, sometimes two or three times per game.

It almost doesn’t matter what formation either manager picks because it is almost inevitable that it will change at some point once the flow of the game has been determined.

That’s what happened when Wales faced Denmark in the last 16. For 20 minutes, Wales dominated and created plenty of shooting opportunities, with Gareth Bale and Daniel James pushing back the Danish wing-backs. Then Hjulmand gave the signal and Denmark moved to a back four with Andreas Christensen shunted into a screening role to get on top of Aaron Ramsey while cutting off the passing lanes into Keiffer Moore.

Wales’ mistake was failing to react or adjust (making a schoolboy error to concede the crucial second goal hardly helped) which isn’t likely to be an accusation we might throw at Southgate on Wednesday night. The England boss has been more decisive with his tactical tweaks and substitutions this tournament and that will need to remain the case in the semi-final. How adventurous Joakim Maehle is feeling on the Danish left could be pivotal in Southgate’s thinking.

So, in summary, Southgate has earned the right to be trusted to make the right decision, and whichever one he makes will almost certainly change at least once over the 90 or 120 minutes. But if he doesn’t start with four at the back, he should be fired on the spot and replaced by Idris Elba or Ray Winstone.

2 – Gareth Southgate will be just the second manager to take charge of England in the semi-final of both the World Cup and the European Championship, after Alf Ramsey in 1966 and 1968. Lion. #EURO2020 pic.twitter.com/PuVqM6RDir

Three is the magic number for Southgate and England – Dave Tickner
If we’ve learned nothing else from the last three weeks, we have had it confirmed that Gareth Southgate doesn’t really need to take advice about his formation for a European Championship semi-final from a couple of gobshites on the internet, whether that’s Watto with his absolute bumwhiff about back fours or handsome and correct people extolling the virtues of a back three.

When not operating as a sleeper agent for Deep Woke – which until Tuesday I thought was was a computer that beat yer Russian fella at chess that time – Southgate has also proved quite adept at managing international football tournaments. It’s three semi-finals in four years if you include the Nations League, and even if you don’t count that, Southgate has still led England to four victories in the knock-out stages of the last two major tournaments. Before Southgate they had won three major tournament knockout games since Italia 90.

That said, he should definitely pick a back three to sort out Denmark on Wednesday night despite a back four dismantling Ukraine so marvellously in the quarter-final. This is a different game, and Southgate has already shown that he grasps this particular concept with the fluidity of his formations and tactics thus far. Each time it’s been built on the core principle of making England as hard as possible to break down. That goals conceded column still reads zero, so he and his players are doing plenty right.

Tailoring your tactics and formation so directly to the opposition can look like a negative move and there are still some England fans who can’t quite get their head round the idea of showing such deference to an opponent’s strengths. We’re England and we should just go out and beat whichever inferior nation happens to be in front of us. It’s worked really well for the last several decades, so why has Gareth changed the plan?

But the thing is that it works both ways. Done right it doesn’t just (hopefully) nullify the key threats of the opposition but gives the best chance for your players to express themselves.

England have already shown that they have the players with the intelligence and ability to switch between formations and styles between games and even during them – this whole conversation is slightly moot given Denmark have shown precisely the same attributes and it’s unlikely either side will finish the game in the same shape in which it started.

A back three, though, emphasises England’s strengths and diminishes their weaknesses, while making life tougher for this enterprising Denmark side. While England were fantastic against Ukraine, that last 10 minutes of the first half gave us wind. Bad wind. Denmark and specifically the magnificent Joakim Maehle will have noted that almost all the problems Ukraine caused England in that admittedly brief yet undeniably unsettling spell came not only down England’s right but whenever right-back Kyle Walker was attacked on his inside.

A back three retains the vital pace on the recovery that makes Walker so important to this side but reduces this specific threat and makes any potential sleepy Walker brainfart less likely to cause too much drama.

It’s the formation that stifled the German threat so wonderfully well, and on current form Denmark are at least if not more worthy of similar respect on Wednesday night. Denmark are a tough nut to crack and had the better of both the recent Nations League clashes against England, drawing in Copenhagen and winning at Wembley.

It’s a semi-final opponent you’d absolutely settle for facing every single time, but that doesn’t mean it’s going to be easy. They are the best side England have faced so far. They’ve scored 10 goals in their last three games and with Harry Kane and Raheem Sterling now both absolutely flying the most important thing for England is once again to keep the back door firmly shut.