Home F365 Features What if form was fed into final Premier League table? 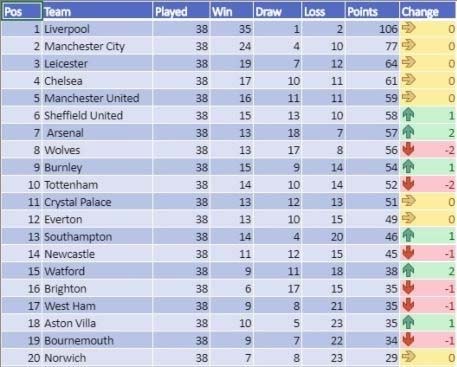 Premier League football may or may not start again, but what has been taken off the table is a null and void season. If no more football can be played, the table might well be decided on PPG (points-per-game), just because all teams have not played the same number of games.

But would it be fairer to take form into account? Surely an uptick in form prompted by a change of manager or January signing should be acknowledged, while an ungracious slide down the table should not be halted by a mere pandemic.

So we have come up with a table that reflects form. The results of the last nine/ten games of the curtailed season basically count double so that each team ends the season with a points total from 38 games, which seems a better reflection of the way the season was panning out… 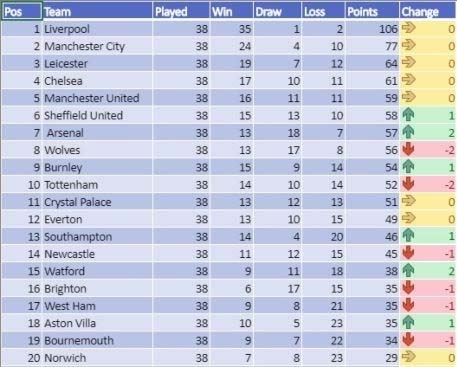 Some things to note…

* Assuming Manchester City’s European ban is upheld, Manchester United narrowly hold onto the final Champions League place, thanks to a massive uptick in form that keeps them ahead of – this will never not seem odd – Sheffield United.

* The Blades would be joined in the Europa League by Arsenal (whose form has drastically improved under Mikel Arteta) and likely Wolves.

* Tottenham really are quite, quite sh*t. Though they would argue that returning players may have turned around that horrible form.

* Of the six troubled clubs, Watford are the only team with the pedigree to pull out of the mire.

* Brighton somehow survive on goal difference despite being the worst team in the Premier League on current form.

* Aston Villa are relegated on goal difference despite their game in hand; such a dire defence cannot possibly be allowed to survive.