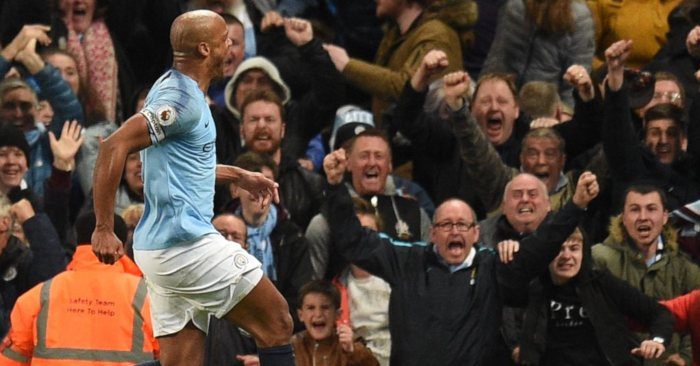 The Etihad Stadium has only celebrated one goal more frenetically than the Vincent Kompany blockbuster which maintained Manchester City’s control over this season’s title race.

Sergio Aguero’s strike which won the league for them back in 2012 is etched, literally, in the club’s folklore. 93.20, the time of the Argentine’s goal, has become part of this now ultra-modern club’s modern history, but the goal scored on Monday night by their Belgian captain will join it on the murals of Eastlands and in the history books.

Until now, Man City had not really produced a defining moment in the latter stages of this title race, a moment which would divert the attention from Liverpool and give the Manchester club a memory on which to dwell.

Since Liverpool dropped points at Everton, it has been a run-in defined by calculated Man City control, confidently building on their 100-point season last time out, but this time wary of an able challenger.

Jurgen Klopp’s charges have been the main focus of the title run-in for that reason. Last-minute goals, heavy metal football, the best player in the league in their defence, and a front three to match if not better Man City’s. Moments in almost every game in their quest to keep pace.

That’s not to say it’s not been hard work for Guardiola’s side, they’ve just made it look easier – the sign of a truly great team. But nevertheless, a team of which greatness is expected, and therefore rarely marvelled at.

When the line-ups were released, the battle between 33-year-old Kompany and buzzin’ Jamie Vardy looked like a weakness for the hosts, but in true Kompany style he stepped up to show great strength, but in the most unlikely manner.

When he joined the club the Belgian was a player who was also able to play in midfield, but went on to lead the team into a new era from defence. Here he stepped back into midfield when his side needed him most, letting off a thunderous strike which nestled unbelievably in the top corner.

Kompany is one of few remnants from the beginning of this club’s rebuild, and he now looks to have helped them add one of the most precious pieces to a project nearing completion.

Another quirk of this game was that Leicester did not allow Man City to control the game as they’ve controlled the title race in the past few months. It was a frantic fixture, more akin to Man City’s games in Europe against Lyon in the group stage and Tottenham Hotspur in the knockouts.

Man City struggled in both legs against Lyon, and were knocked out by Spurs, and this brings us back to the fact that Leicester had not lost to this side in 90 minutes this season – this side which needed a win, and for long periods of this game didn’t look like it would get one.

The visitors tried to play football, and at times were able to do so, pinging passes around as their opposition so often do, while also launching blistering attacks on the occasions they managed to evade the press.

But this press was relentless, and Rodgers’ side were forced to spend much of their time on the ball in their own half, or at least in the middle third. Kasper Schmeichel began the game playing goal-kicks short to his defenders, but eventually reverted to hitting it long or to the full-backs.

Among all the commotion, the sides were cancelling each other out. Leicester’s counter-attacks were being broken down, and Man City’s possession failed to probe and they were limited, in the main, to shots from distance.

It was around the time of Leroy Sane’s introduction in the 56th minute that things became agitated in the Etihad. Bernardo Silva, Raheem Sterling and Ilkay Gundogan all sent shots off target from outside the area, an occurrence which was becoming frustratingly common for the home supporters.

The tension rippled around the stadium, and when Harry Maguire burst forward from centre-back to set up James Maddison, hearts were in mouths as the ball drifted wide.

Aguero sprang to life and forced an excellent save from Schmeichel and when, shortly after, Kompany stepped forward from the back the fans were encouraging him to do anything but shoot.

“Don’t even think about it Vinny,” shouted one of the more vocal members from the luxury seats of Tunnel Club…

But what happened next was a moment in fitting with this club: almost ridiculous, somewhat comedic, an inflatable banana of a goal, a goal which wasn’t really here, one for the invisible man, but also one of the highest quality in fitting with its new standing in world football.

It sent the fans into raptures, giddy as they celebrated, instantly forgetting their instinctive shouts to their captain to lay off the ball.

Outstretched Schmeichel was nowhere near it, and he’ll have the misfortune of being on highlight reels for years to come should Man City go on to win their next game at Brighton.

The nature and timing of the goal made it feel like the title had been won as the players did their customary end of season lap of the pitch in this final home game, and though it is not won yet, Manchester City now have their moment for 2018/19 if they do emerge victorious.

Gone is the clinical, calculated control, and in its place sits a crazy goal of the season from the  ageing centre-back who was supposed to be the weak link. Typical City.