Home Mediawatch ‘Fingers acting as weapon-substitutes’, Poch to Arsenal and… 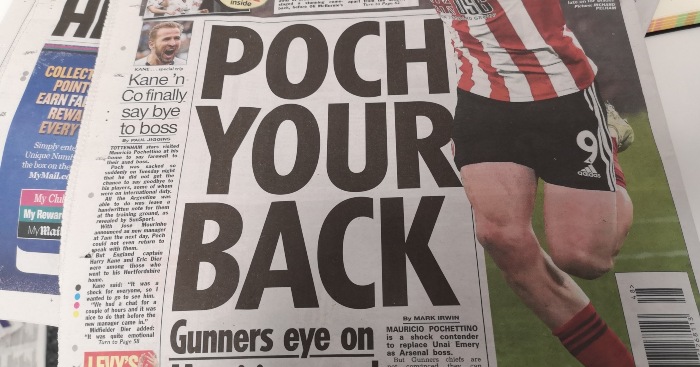 Crystal bollocks
Mediawatch has a lot of bug-bears. But without bug-bears, there is no Mediawatch. And near the top of our bug-bear list is the current trend to produce old quotes as ‘news’ in the context of current events. So (old) comments are ‘revealed’ amid/as a situation is developing now. Voila; you have yourself some clicks.

The Mirror are masters of this misleading genre, and Jake Polden is their leader.

And of course Mauricio Pochettino’s (well-documented) comments are from January 2018. They were not made ‘as’ pressure is growing on Unai Emery; they were made ‘as’ pressure was mounting on Arsene Wenger. Basically, it’s a crock of sh*t.

Also in Polden World this morning:

Yep, Sir Alex Ferguson looked likely to be proved absolutely right in his bold 2013 prediction that Jones “is going to be a phenomenal player” right up until the minute he was rubbish for 45 minutes at Sheffield United in 2019.

‘Shock’? Come and find us when Arsenal don’t want one of the best Premier League managers of this decade.

Turn to the inside pages and the tenth paragraph tells us:

‘But the highly regarded Argentine coach has always said he would never manage Barcelona because of his strong affinity with their city rivals Espanyol.

‘And he is likely to take a similar view with regard to working for Arsenal, when forging a close bond with Spurs fans during his 5-and-a-half years at the club.’

‘Likely’? He literally said “I am never going to be manager of Barcelona or Arsenal because I am so identified with Tottenham and Espanyol”.

Pold on a minute…
And when he’s not pretending that old quotes count as ‘news’, Jake Polden is consulting body language expert Judi James about ‘Sir Alex Ferguson and Ed Woodward’s ‘heated debate”.

‘The impression of a battle between the two men comes primarily from the way the pointed fingers are being employed.

‘This gesture is like an invitation to a ‘duel’, with the index fingers acting as weapon-substitutes.’

Now Mediawatch is no body language expert, but wouldn’t the ‘weapon’ be more effective if it was pointed at the intended target. It looks an awful lot like, well, just ‘pointing’ to us…

Special request
‘Pep Guardiola and Jurgen Klopp may be locked in battle for supremacy within English and European football – but they put rivalries to one side on Sunday night to attend the Football Writers’ Association northern branch managers’ awards dinner in Manchester.

‘The pair spent a considerable amount of time talking to one another in the reception area before both taking their seat on the top table inside the function room, albeit separated by the branch chairman Andy Dunn from the Daily Mirror.’

Those are the first words of a snippet in David Ornstein’s Monday column in The Athletic, which also includes the revelation that ‘Guardiola also said it was clear Klopp wanted to win his trophy (the Premier League) and that he wanted to win Klopp’s (the Champions League), “so maybe we can swap?”‘. A joke, clearly.

A joke but apparently newsworthy enough to be the very top story on the Mirror Football website on Monday morning. The very top. Because this is the very biggest thing in football after a weekend when Unai Emery, Marco Silva and Manuel Pellegrini all edged closer to the sack. And a weekend when John Cross, David Maddock and Darren Lewis have all produced detailed updates about those managerial situations.

But this is bigger, obviously…

And do you know what’s most ridiculous? That this Mirror story did not originate from the Daily Mirror man who actually sat between Guardiola and Klopp – who presumably did not consider those words newsworthy – but comes ‘according to The Athletic’, who have basically spent a metric f***-tonne of money to be quoted in clickbait nonsense.

‘WHEN the names of the Premier League’s top strikers are rolled out, Kane, Vardy, Aguero and Abraham almost trip off the tongue.’

Do they? Well the first three might, but Tammy Abraham needs a few more goals over a few more seasons to earn that kind of billing.

‘But for the team at the top of the league, the team currently running away with the title, it is Sadio Mane who is doing the business.’

Really? You don’t say. The fella with 29 goals this calendar year? Spotter’s badge to that fella paid handsomely to watch football.

* This: ‘With Joao Cancelo, John Stones and Benjamin Mendy as reliable as a chocolate fireguard, Pep Guardiola has been very astute in keeping Fernandinho around.’ Was there ever any suggestion that he was not going to be kept around?

* ‘Wolves are fifth. They can’t possibly keep this up.’ This would only make sense if Wolves were on some improbable run of form. Does somebody want to tell Crooks that 19 points from 13 games would be mid-table form in any other season?

DNA
Jesse Lingard may not have scored or assisted a Premier League goal since January but he has one thing in his favour, as highlighted by John Cross in the Daily Mirror:

‘It looked all over. But Manchester United found a recovery from somewhere as half time substitute Jesse Lingard and Rashford showed they understand the United DNA. They never gave up and fought for the shirt.’

Who needs goals and assists when you have Manchester United DNA (and play for an England side covered extensively by Cross)?