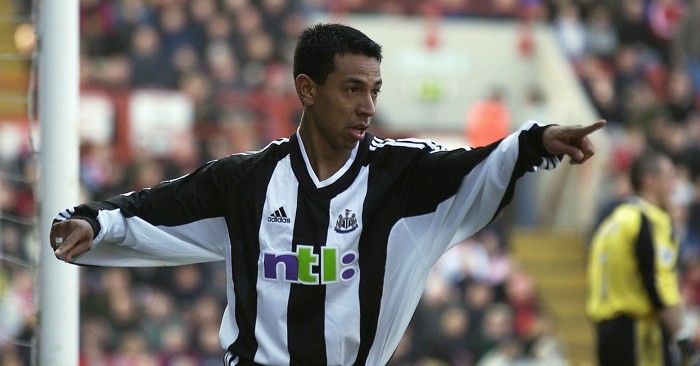 Nolberto Solano arrived in Newcastle in 1998 possessing his wondrous right foot, a trumpet and two words of English; he left a decade later a hero.

The Peruvian was signed by Newcastle after one season with Boca Juniors where he was christened the ‘Little Maestro’ by some chap called Diego Maradona thanks to his set-piece ability. Maradona was not the only famous name who thought highly of the midfielder as Kenny Dalglish made Newcastle pay £2.5million to bring him to St James’ Park.

Before even making his debut for the first team, Solano was already causing a stir as he forced the kick-off to be delayed in his first reserve outing due to the number of people who wanted to see the unknown Peruvian play. Naturally he scored and the legend spread as fans awaited seeing the man from Callao.

Solano joined Newcastle at a tough time for the club – they had finished 13th in the season prior to his arrival and Dalglish was soon sacked and replaced by Ruud Gullit. The squad endured an overhaul as the Dutchman tried to make his mark on a team short of confidence and create “sexy football”. Alas, few were turned on by Didier Domi and Solano’s first campaign in England ended in another 13th-place finish.

It was not all doom and gloom for Solano and Newcastle, as the South American import quickly adapted to life in his adopted hometown, learning English and teaching the Toon how free-kicks and corners should be taken. Newcastle reached the FA Cup final in May 1999 but came up against the might of treble-winning Manchester United, although it was still a historic day at Wembley for Solano himself and Peru as a nation.

Alan Shearer was the great beneficiary of the Peruvian’s fantastic delivery into the box. Solano’s crossing created more arm-raised celebrations than any other in the Newcastle team, though this was in the days before we counted assists.

Great player. I owe more than a few goals to you my friend! https://t.co/vDdGG1pDSA

Solano’s heritage was always a source of pride for a man dedicated to the Peruvian national team, so he would travel home for every international, much to the chagrin of Bobby Robson, who became frustrated with his midfielder as he felt the excessive travel was having an impact on his club performances. But Solano was committed to his country so simply kept going, resulting in Robson leaving him out of several squads. Annoyed, he would get his revenge by playing the trumpet down the phone to Robson, who had no idea about the identity of his musical prankster until a member of staff informed him of Solano’s musical skills.

Although Robson enjoyed the comical nature of his player’s response – which was a different take on the usual ‘disgruntled’ – Solano was sold to Aston Villa in a deal which suited all parties in the end, apart from Shearer. Eighteen months after leaving St James’ Park, Solano was brought back by new manager Graeme Souness, who was told to sign him by his No 9. Solano said about Shearer: “He influenced matters and this would not have been possible without him.”

Solano was back where he belonged and he carried on as he left off, swinging the ball onto Shearer’s head and right foot. He continued to do this for two more years before wandering off to the capital to be closer to his family. West Ham was his destination.

It was not the end for Solano and the north east, a place that became his second home throughout his years playing in the Premier League. He had no qualms about returning to the region to play for League One Hartlepool United under his former coach Mick Wadsworth. His friend was dismissed midway through the season and Solano fell victim to his replacement, Neale Cooper, who did not have much time for the Peruvian’s talents, telling the BBC at the time: “At this time I need players who will really graft, that’s not Nobby’s game.”

It’s fair to say Solano had already put in plenty of graft to make it as far as he could from Peru to the Premier League.

As he was not in the team, Solano kept himself occupied, taking on a coaching role at amateur side Newcastle Benfield and being part of the academy set-up at St James’ Park. Staying in the area allowed him to blow his own trumpet a bit more as part of the Geordie Latinos, who were a local salsa band boasting Solano in the free role.

Now back in his native Peru, Solano is assisting the national team and will be part of their coaching staff in Russia this summer. Seeing his country at the World Cup will be one of his proudest moments in his career, but it could still be topped if he can one day return to his adopted home to live out his dream of becoming Newcastle manager.