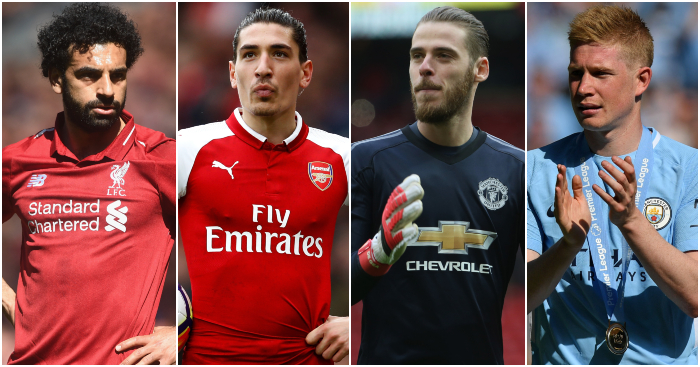 We did this last summer, which feels an enormously long time ago.

Arsenal: Hector Bellerin
Why is he undroppable? Bit of guesswork involved as Arsenal race into a giddy new era, but Bellerin was the one man specifically named among Unai Emery’s five Emirates ‘Untouchables’ and it seems a safe enough shout. The actual answer may eventually prove to be Sokratis Papastathopoulos if/when his transfer is confirmed on the simple basis that Shkodran Mustafi played 27 Premier League games last season, which is 27 too many, and Laurent Koscielny is out until Christmas.

Bournemouth: Nathan Ake
Why is he undroppable? The Cherries’ continued acts of Premier League odds-defiance are built from a settled defence in which Simon Francis, Charlie Daniels and Steve Cook all racked up over 30 Premier League appearances last season. Solid citizens one and all, but at 23 years old Ake is already on another level. He played in all 38 of Bournemouth’s Premier League games last season, completing the 90 minutes in 36 of them and missing just 67 minutes in total.

Last season: We said Steve Cook on the back of an ever-present campaign. It was as solid a shout as the man himself, who chalked up another 34 games in 2017/18.

Brighton: Pascal Gross
Why is he undroppable? Seven goals and eight assists in a team that only scored 34 goals all season. Woof.

Last season: We said Anthony Knockaert. Understandable for sure, but a swing and a miss.

Burnley: James Tarkowski
Why is he undroppable? Stepped up like an absolute bloody hero to ensure Michael Keane’s departure wasn’t felt as Burnley defied all odds, logic and expectation to finish seventh. Only the top five had better defensive records than the Clarets, who conceded TWELVE goals fewer than Arsenal.

Last season: We said Ben Mee. Not a bad shout – 29 appearances as Burnley remarkably secured European football – even if it was mainly because Winty has a very childish sense of humour about commentators saying “comes inside Mee”.

Cardiff: Josh Murphy
Why is he undroppable? Scored 11 goals for Norwich from the wing last season. Neil Warnock called him his “number one target” when landing an £11m summer deal. Might go rapidly, enormously tits up, but right now he’s the top man.

Chelsea: Cesar Azpilicueta
Why is he undroppable? Honestly? Because it’s as good an answer as any. Who knows what’s going on at Chelsea right now. It all seems a bit messy. They don’t really have a manager, and they don’t really seem to have any particular transfer plans. Azpilicueta has played in 112 of Chelsea’s 114 Premier League games in the last three seasons in perfectly competent fashion. We’re just playing really safe here, basically, because…

Last season: We said, er, David Luiz. No, you shut up. FFS though, Winty. This is why women shouldn’t talk about football.

Crystal Palace: Wilfried Zaha
Why is he undroppable? Best player outside the big six? Probably. The main reason Palace are still a Premier League club? Definitely. He’s been Palace’s player of the year for each of the last three seasons. Only injury or an unlikely megabucks transfer will stop that being four.

Everton: Jordan Pickford
Why is he undroppable? We’re really not sure what Everton’s team is going to look like in a shiny new era. With former PSV chief Marcel Brands in as director of football they might sign some really, really lovely footballers. The one thing we’re pretty confident of is that they won’t be looking to replace England’s No.1, who was reliably ever-present in a season of flux and upheaval.

Last season: We said Michael Keane after his big-money move from Leicester. Fair to say it didn’t go entirely according to plan for the centre-back, but only Pickford and Idrissa Gueye played more Premier League minutes for the Toffees.

Fulham: Ryan Sessegnon
Why is he undroppable? This one is Zaha-level easy. Sure, there’s the slight additional doubt on top of possible injury or big move away in that Sessegnon is stepping up to the Premier League for the first time. He’s going to be fine, though, isn’t he. The 18-year-old played in every one of Fulham’s 49 league and play-off games last season, scoring 16 goals and providing eight assists. The boy’s a bit special.

Huddersfield Town: Aaron Mooy
Why is he undroppable? You could just as easily put goalkeeper Jonas Lossl or defenders Christopher Schindler and Mathias Jorgensen here, all of whom played at least 37 out of 38 games last season. But admirable as they are, it’s Aussie midfielder Mooy – who played a mere 36 games – who makes Huddersfield tick and offer something more than redoubtable resistance at this rarefied level. Four goals and three assists aren’t earth-shattering stats, but only two Huddersfield players scored more goals and only one provided more assists.

Last season: We said Christopher Schindler. He played 37 games as the Terriers defied all expectations by surviving, so we’re calling that one a win.

Leicester City: Jamie Vardy
Why is he undroppable? Leicester have a remarkably settled first XI – seven players made 32 or more Premier League appearances for the Foxes last season – and cases could be made here for Harry Maguire, Wilfred Ndidi or Riyad Mahrez. But Leicester are (now) a mid-table club with a 20-goal striker. No other mid-table clubs have 20-goal strikers and, more to the point, Leicester understandably don’t have any others sitting around.

Last season: We said Wilfred Ndidi. Was it a good answer? Yes, Ndidi. He missed five games all season, two through suspension in April and three through injury at the back end of the season. Leicester lost four of those five games with their only win in that time coming at home against Arsenal which therefore hardly even counts.

Liverpool: Mohamed Salah
Why is he undroppable? You could try to be clever here and talk about the importance of the wonderful Roberto Firmino or whatever, but come on. Salah scored more goals last season than anyone else has ever managed in a 38-game Premier League campaign and he’s not even a striker.

Last season: We said Joel Matip. Seven people had more Premier League minutes for Liverpool than the Cameroon centre-back, but that was in large part due to a thigh injury that ended his season in March.

Manchester City: Kevin De Bruyne
Why is he undroppable? You want clever, hipster answers then go elsewhere. We’ve got 20 of these to get through. Based on last season, City could probably drop absolutely anyone and it might mean they only win the league by 10 points. But if you were playing against City and given the chance to weaken them by removing one player, then it would be De Bruyne in the hope of at least disrupting the rhythm for a short while.

Last season: We said Ederson, on the basis that Claudio Bravo was his only competition. Ederson played in 36 of City’s record-breakingly successful season, and therefore a small slice of that success belongs to us.

Manchester United: David De Gea
Why is he undroppable? Seems a bit of a cheat putting the goalkeeper given that most sides will have an established No. 1. But De Gea has to be the pick here, doesn’t he? Best goalkeeper in the world, World Cup bloopers notwithstanding, and he’s up there with Salah and Zaha for the significance of impact on a team’s results from one player.

Last season: We said Paul Pogba. You will think this either laughably bad or indisputably correct. We don’t even know any more.

Newcastle United: Jamaal Lascelles
Why is he undroppable? Because he quickly established himself as Newcastle’s talisman on their return to the top flight. We still don’t know why he didn’t get an England call at any time during the season, and Rafa aside he was the single biggest factor in Newcastle’s relatively serene Premier League survival.

Southampton: Ryan Bertrand
Why is he undroppable? The only Southampton player to reach 3000 Premier League minutes last season and, until they sign someone, anyone, almost in by default after the Saint’s season of strife.

Last season: We said Oriol Romeu. He was second to Bertrand on the minutes played list. A win for Winty, albeit one that leaves us all feeling a bit empty and sad inside. Southampton were genuinely exciting back there for a while.

Tottenham: Harry Kane
Why is he undroppable? Because he’s Harry Kane. Because he’s probably the best number nine in the world. Because he’s scored 105 Premier League goals in the last four seasons from 139 games. Because he is a hero the Daily Mail can be proud of. Because there still isn’t really any proper back-up.

Watford: Abdoulaye Doucoure
Why is he undroppable? The midfielder had more minutes and more goals than any other Watford player last season, and won possession in the middle-third more than anyone else in the division. Bigger beasts are sniffing around, but while he remains at Watford he’s the first name on the team sheet.

Last season: We said Etienne Capoue, who failed to match his 2016/17 highs.

West Ham: Marko Arnautovic
Why is he undroppable? Because once he found his feet he injected some much-needed life into another largely joyless season at the world’s worst football stadium.

Last season: We said Michail Antonio, whose season was scuppered by rib, calf and finally hamstring injuries, the last of which reduced him and, we can only assume, Winty to tears of frustration.

Wolves: Ruben Neves
Why is he undroppable? Who knows what Wolves might do over the rest of the summer – they splashed £15m on Neves while still in the Championship, after all – but for now the prodigiously-talented highlights-reel of a player remains Wolves’ star attraction. Has been linked with both Liverpool and Manchester United but has decided to stay with Wolves to ensure he actually plays some games. Ergo, a clever lad.