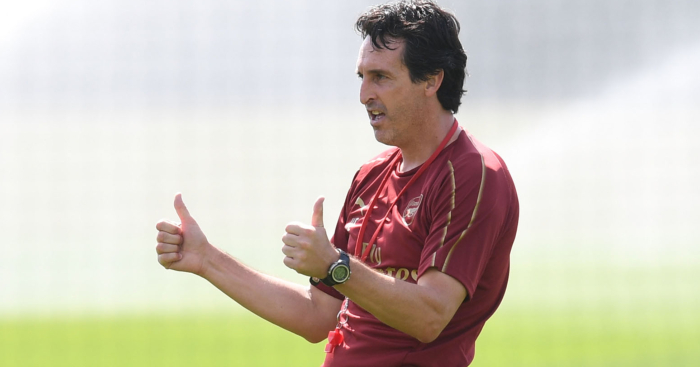 Emery old time
Arsenal appointed Unai Emery as manager on May 23. He was given a three-year contract and a remit to lead the club into a new era after Arsene Wenger stepped down following two decades of leadership.

Yet three months – and two results – into his reign, we are told that he ‘is the most at risk’ of being the first Premier League manager to be sacked this season.

Jeff Powell writes that ‘the wolves are howling for the heads of Premier League managers and August is not yet out’ in his Daily Mail column. When did ‘the wolves’ become a synonym for ‘the tabloids’?

We are told not to ‘bet hard-earned wages’ against any of Emery, Manuel Pellegrini and Jose Mourinho being the first to go. After two games.

When Arsenal appointed Emery, chief executive Ivan Gazidis said the club “conducted a confidential, wide-ranging and rigorous search involving extensive background references, data and video analysis, and personal meetings with all the candidates we shortlisted. All were interested in the position and we were unanimous in our choice of Unai to drive the next chapter of our history”.

That certainly sounds like a club that will sack a manager after they failed to beat the two most recent Premier League champions in their opening fixtures.

Mediawatch would never recommend placing much stock in the words of Powell, who claims Arsenal supporters ‘are looking askance already’ at the new manager. They really aren’t; they recognise what he is trying to do and accept it will take time.

It is the media who are questioning Emery – as Powell proves – and there has been a strange attempt by many journalists to point towards fan disgruntlement where there is none. Powell, Tony Adams and Sam Allardyce are the ones constantly asking what Emery has been doing for the last six weeks. To their credit, the supporters are being a little more patient.

Speak of the devil
On the back page of The Sun, we are told that Adams thinks Emery is ‘too similar’ to Arsene Wenger. By that, we assume he means this new guy is also a foreign.

Adams explains that he was “so excited” when Emery was appointed, but “felt so sad” after watching “an Arsene Wenger performance” against Manchester City.

The former Arsenal centre-half wants to see “that steel, that resilience” back at the Emirates Stadium, where “there’s no-one rocking the boat”. Basically, “you’re not watching them thinking ‘there’s a change here'”.

Not unless you actually bother to look beyond the opening two results, both against teams who finished higher last season and spent more this summer.

Alive and kicking
But Adams is not done. He continues by telling Arsenal what they are missing: Someone to kick Mesut Ozil like they used to do with Dennis Bergkamp.

“There’s only so much a coach can do. It starts in training. We used to kick Dennis. Bouldy would kick him up in the air again and again. After a while of this he turned round and stamped on Bouldy and said ‘I’ve had enough of you effing kicking me, you’re going to get a little bit back here.'”

The Sun capture the essence of Adams’ quotes most effectively, with a headline of ‘OZIL NEEDS KICKING’, and a picture caption of ‘BOOT HIM UP THE ARSENAL’.

A reminder that Tony Adams spent his first press conference as Granada manager saying: “I’m here to give the players a kick up the arse and win games,” before subsequently losing seven games and having his arse kicked out of the door.

Forgive Emery if he decides not to listen.

Week sauce
There must be something about Emery that stirs the emotions, because Sam Allardyce and Gary Neville have been locked in a debate over the Spaniard for almost a week now. The former has had another go at the latter on talkSPORT.

“Gary thinks he’s an expert in the field, as you well know. Why he quite had a dig, I’m not that sure, but of course Gary is very open in his own opinion.”

Whereas the man who appeared on The Wright Show last week is more of a shy and retiring type.

“Let me say this: I’ve managed seven Premier League clubs and over 1,000 games – do you think I’m entitled to my opinion? I think so.”

And Neville has won eight Premier League titles, two Champions League trophies, and has established himself as one of the country’s leading pundits for good reason. Why are you not both entitled to your own opinions, providing they are voiced sensibly?

“He talks about me having to win five games to save a club from relegation, I never got five or six weeks. If I don’t get a result in five weeks, the club I take over is relegated – so I have to do it in days. I have to work out the players immediately and convince all of them we have to turn results around immediately.”

In his first 50 days after being appointed Crystal Palace manager, Allardyce won one of his opening eight games.

In his first 82 days after being appointed Sunderland manager, Allardyce lost eight of his opening 11 games.

It certainly seems like he got at least five or six weeks.

“So he’s not right in what he said, but Gary is Gary – he’s got his opinion and I’ve got mine.”

‘Everyone has their right to an opinion – but yours is wrong,’ says teenage 63-year-old.

No matter what I do, all I think about is you
Gareth Southgate apparently has a ‘squad dilemma’ ahead of next month’s return to England action. Who knew?

‘It would be easy to make England’s homecoming a sentimental affair,’ Neil Ashton writes for The Sun.

‘Pick the 23 players who went to the World Cup for a lap of honour around Wembley on September 8 against Spain and let them soak it all up.

‘Gareth Southgate’s men have earned a pat on the back, the right to feel the warmth of the country on home turf again after making it to the semi-finals in Russia.

‘The dilemma for the England coach as he prepares to name his squad on Thursday for their opening UEFA Nations League tie with Spain, is that so few of them are starting Premier League games.’

Yeah, because they reached the World Cup semi-final, then actually had a well-deserved holiday after almost a full year of football, and so returned to training a little too late to feature so soon. This happens after every major international tournament. It is not new.

Ashton then brings up six players who ‘have yet to make an appearance in the top flight this season’. Among them are Gary Cahill, Fabian Delph, Phil Jones and Danny Welbeck, none of whom are regular England starters anyway. Nick Pope is another, having been injured in a Europa League game.

Just what is the ‘dilemma’ Southgate faces here? And is it as serious as his goalkeeping ‘crisis’?

Recommended reading of the day
Jacob Steinberg on Jack Wilshere.