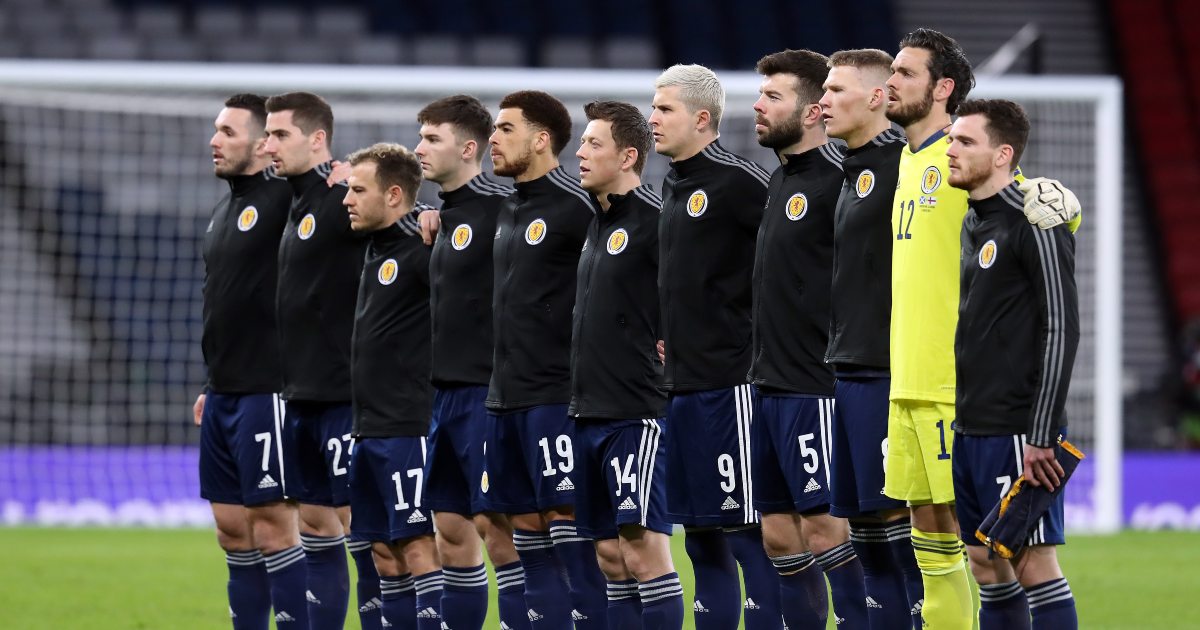 Following almost a quarter of a century in the international footballing wilderness, Scotland return to the party this summer with Steve Clarke’s side set to face England, Croatia and the Czech Republic in Group D at Euro 2020.

Regular readers of Football365 will know that we write regular England ladders, with the latest from April here.

While a Scottish ladder might have seemed like something of a waste of time in years gone by, the Scots now boast a deeper and more talented pool to choose from than at any other time this century. Yes, really.

This selection is based on our interpretation of Steve Clarke’s thoughts for his projected 26-man squad for the finals in June.

1 ) Kieran Tierney (Arsenal)
The best left-back in the world today? Just 23 years old and surely a future national team captain, the former Celtic defender is the heartbeat of this improving Scottish squad. First name on the team sheet, fitness permitting.

2) John McGinn (Aston Villa)
10 goals in 31 international appearances demonstrates the importance of McGinn to a Scottish side that has struggled for goals for, well, ever. Only Gini Wijnaldum has scored more international strikes from midfield since the Aston Villa lynchpin netted his first in the dark blue back in 2019. McGinn is vital to Scots’ hopes of progression to the knockout phase. And yes, they do have hopes.

3) Andy Robertson (Liverpool)
Probably not ideal when two of your three best players are left-backs, and while the captain is not having a stellar season, Robertson is still one of the best full-backs in world football. A vital presence in the left wing-back role, his outstanding combination with Tierney in recent fixtures dispelled notions that the two cannot play together. Spoilsports.

Aston Villa’s John McGinn on the Scotland player he’d most like them to sign: “I’ll go with big McTominay, I’m not choosing between Tierney and Robertson because that will be a debate.” [The Big Interview via Birmingham Live] #mufc

4) Scott McTominay (Manchester United)
A real breakthrough season for the Manchester United midfielder/defender. McTominay has scored seven goals for Ole Gunnar Solskjaer’s side this season and, despite comparisons with Darren Fletcher, is actually rather good.

5) Ryan Christie (Celtic)
Scored the vital goal against Serbia that helped secure qualification and, with it, his place in Scottish footballing folklore. With his Celtic contract drawing to a close, a move south of the border – Norwich and Burnley have been linked – seems likely following a disappointing season with the deposed Premiership champions Celtic. Gives one hell of an interview.

6) Ché Adams (Southampton)
Named after the infamous Cuban revolutionary, Adams’ long-lost Scottish granny could yet help to revolutionise a Scottish attack famed for its impotence. Scored a scorcher on his debut and could start as a lone number 9 come June. Hasta la victoria siempre. Or something.

7) Callum McGregor (Celtic)
Having an indifferent season by his high standards, but McGregor is one of the team’s most experienced players and remains a vital cog in a Scottish engine shorn of the talents of the injured and under-rated Ryan Jack.

8) David Marshall (Derby County)
Yes, sir, he can boogie. Forever a national hero following his decisive penalty save from Aleksandar Mitrovic, Marshall should expect to be Scotland’s No1 despite the re-emergence of veteran Craig Gordon.

9) Grant Hanley (Norwich City)
Yes, Scotland are definitely somewhat limited in the centre-back department. Still, Hanley should be full of confidence following a title-winning year at Norwich and is likely to form part of a back three with Tierney and McTominay.

Sometimes I get excited that Scotland are finally playing in a major tournament this summer.

Then I remember that I’m going to have to watch Phil Foden running at Grant Hanley and Stephen O’Donnell for 90 minutes.

10) Stuart Armstrong (Southampton)
Talented and creative, the Southampton regular should feature heavily in the midfield with Jack unavailable and McTominay likely to be busy with defensive duties.

11) Stephen O´Donnell (Motherwell)
Not the most glamorous of inclusions, but the Motherwell full-back has performed well at international level and is a shoo-in to start the first game against the Czechs.

12) Lyndon Dykes (QPR)
Australian-born QPR target-man has impressed with two goals in 10 caps (yes, those really are impressive numbers for a Scottish striker) following his rapid emergence in the Dark Blue but could lose his place as Scotland´s number 9 with the aforementioned Adams offering more experience and pace in abundance.

13) Ryan Fraser (Newcastle United)
Newcastle whipper-snapper remains one of the country’s most talented and creative outlets despite a season of Steve Bruce´s coaching methods. Could yet make the starting XI should Clarke opt for a little and large duo with Dykes.

14) Jack Hendry (Oostende – on loan from Celtic)
A successful loan spell in Belgium has propelled the Celtic defender back into international contention. Started two of the last three World Cup qualifiers and could yet find his way into the defence should Clarke opt with McTominay in a midfield role.

15) Kenny McLean (Norwich City)
The 6th left-footed player to feature in the top 15, McLean is a solid and dependable character. Unlikely to start, but did score vital penalties in those historic shoot-out wins over Israel and Serbia. On the plane. Or bus. This is Scotland.

16) Craig Gordon (Hearts)
Despite playing at a lower level with Hearts following 115 career injuries (only a slight exaggeration), Gordon is a talented and experienced keeper who could yet challenge Marshall for the No1 position.

17) Declan Gallagher (Motherwell)
A surprise choice in the heart of Clarke´s defence during qualification, Gallagher marshalled Mitrovic tremendously in the qualifying win over Serbia but was left out of the starting line-up for the Scots’ recent World Cup qualifying fixtures. Still, his place in the squad seems assured.

18) James Forrest (Celtic)
The ace up our sleeve. Injury curtailed much of the diminutive Celtic winger´s season but, even at 30 years old, he offers genuine pace and width to the Scots’ attack. Super-sub appearances seem likely.

19) Scott McKenna (Nottingham Forest)
Not the best of seasons for the Forest defender with his place in the squad further illustrating the current paucity of Scottish centre-half options.

20) Liam Palmer (Sheffield Wednesday)
Likely to be relegated to League One with Sheffield Wednesday, right-back Palmer should keep his place in the squad despite the emergence of Nathan Patterson at Rangers and remains a limited but firm-back up to O´Donnell.

21) Jon Mclaughlin (Rangers)
Rangers’ No2 goalkeeper will serve as Scotland’s No3 this summer. Nice work if you can get it.

22) Greg Taylor (Celtic)
Unlikely to get many opportunities with the skipper and Tierney ahead of the Celtic-full back in the pecking order but still seems certain to get the call. A solid, if unspectacular deputy for the Champions League-winning skipper.

23) John Fleck (Sheffield United)
After a wonderful breakthrough year in the Premier League last season, Fleck has regressed in a dreadful Sheffield United side. Will be fortunate to hold onto his place as a midfield reserve with a certain Chelsea youth ready to gate-crash the party.

24) Andy Considine (Aberdeen)
Yet another leftie! The Aberdeen veteran is a favourite of boss Clarke and, despite all rationale, is likely to make the final 26 ahead of the current Leeds United captain. Considine is the 11th left-footed player to feature in the top 24. Remarkable.

25) David Turnbull (Celtic)
A real breakthrough year for the former Motherwell man, Turnbull has yet to earn a first cap, but the creative midfielder seems a genuine candidate to be one of the three to benefit from the increased squad size of 26.

26) Billy Gilmour (Chelsea)
The nation’s great hope. A precocious and prodigious talent, Gilmour has yet to be called up by the conservative Clarke but looks like Scotland´s finest prospect in at least a generation. Surely a must for the summer, particularly given the loss of the man below.

27) Ryan Jack (Rangers)
Would be much higher in this list but for a niggling calf injury that ended his chances of participating this summer. Under the astute guidance of Steven Gerrard at Rangers, Jack is a hugely improved sitting midfielder and will be a sore miss, despite a wealth of potential replacements.

28) Kevin Nisbet (Hibernian)
Seventeen goals for Hibs this season, Nisbet has one cap to his name and having been included in recent squads, has an outside chance of inclusion.

29) Leigh Griffiths (Celtic)
A man English supporters might never forget, Griffiths remains a maverick. The romantics’ choice but with only seven goals this season seems destined to have missed his chance to appear at a major finals. Still, we´ll never forget you, fella.

30) Callum Paterson (Sheffield Wednesday)
Jack of all trades, master of none, Patterson is a reliable sort but looks likely to miss out despite his versatility and a wonderful moustache.

31) Liam Cooper (Leeds United)
Bad luck with injuries seems to have cost him favour with the boss but should surely be a stick-in for a defence boasting two Motherwell regulars. Apparently not.

32) Oli McBurnie (Sheffield United)
A £20million forward (???) with seven goals in 65 appearances over two seasons with Sheffield United says it all. Fortunately, injury has ended the goal-shy forward’s chances of sitting on the Scots’ enlarged bench this summer. Might have been more popular with the fans had he not described Scotland duty as “shite”.

33) Nathan Patterson (Rangers)
A brilliant prospect, the young Rangers full-back likely lost his chance when breaking COVID rules to attend a late-night Glasgow gathering. Thankfully, knives and Buckfast were not, on this particular occasion, involved.

34) Laurence Shankland (Dundee United)
Prolific in the lower leagues, the Dundee Utd forward is limited at this level and, with the emergence of Adams and Dykes, is unlikely to make the provisional or final squad of 26. Shanked it.

35) Ryan Gauld (S.C Farense)
The man known as Mini-Messi has had an excellent season with Portuguese Primeira Liga outfit Farense and, despite calls for his inclusion, remains on the periphery of the squad. Too small or too much of a maverick of the defensive-minded and determinedly dour Clarke? Would be a popular if unlikely choice.

Ryan Gauld in a nutshell for me:

Another 4 “chances” created tonight including assist

36) Oli Burke (Sheffield United)
Another over-priced and under-performing Sheffield United/Scots forward set to miss out. Sixteen career goals for a player who has been transferred for a collective total of over £30 million. Staggering. His ship has sailed.

38) Ryan Porteous (Hibernian)
Similar to the man above, Porteous is one for the future.

39) Roby McCrorie (Livingston – on loan from Rangers)
A young goalkeeper with time on his side. Seems a likely No1 once the current crop of veteran keepers is sent to pasture.

40) Matt Phillips (West Brom)
Never convincing in a Scotland jersey, Phillps is the 13th Premier League player to feature in the top 40, and despite 28 appearances for the Baggies this season, has not been called up since 2019. His time has passed.