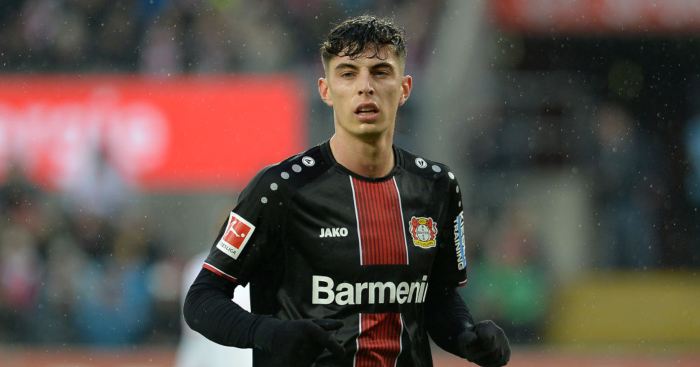 They could all join Premier League clubs this summer for a rather large sum of money and yet we have never knowingly watched them play a single second of association football. And that is absolutely fine.

Kai Havertz (Bayer Leverkusen)
The youngest player to reach the 50-game and 100-game landmarks in the Bundesliga but we have seen not a single one of those games, though we hear he played splendidly in the majority. We did not see him play as a striker – and score – in a Europa League win over Rangers that apparently took place less than six weeks ago but might well have been last century.

We know his face and believe it to be a little on the cocky side but this has apparently not put off either Manchester United or Liverpool, who presumably have seen him play. “He is from Aachen, has been here since he was eight. Nice boy to work with. Intelligent. He also plays the piano,” said Bayer Leverkusen boss Peter Bosz, who then went on to say that he would not be sold for less than 100 million euros. Which is officially a sh*t-tonne of money.

And yet we are not completely certain that he is not entirely made up.

Diego Carlos (Sevilla)
We have been told that Jurgen Klopp has identified Diego Carlos as a potential partner for Virgil van Dijk. And there we were thinking that Joe Gomez was doing really quite nicely, thank you. After all, he has not actually lost a Premier League game since January 2018. Meanwhile, we could not identify Diego Carlos in a line-up unless he were wearing a Sevilla shirt and the smug look of a man who moved for just £13.5m last summer and now has a £65m buy-out clause.

He has just turned 27, has never played for Brazil and we don’t really know what he looks like even though we have just Googled him and looked at a picture.

Think its ridiculous we are considering spending £70M on a central defender, Diego Carlos, when we have one of the best up & coming centre backs in Europe in Joe Gomez. Gomez is quick, reads the game well, good passer & has recovery pace. Sends the wrong message to the academy

Dayot Upamecano (RB Leipzig)
“He is a young player, he is highly talented, he’s fast, has a good positional game and he uses his body well for his 21 years old. I can still see one or two percent where he can learn. But, as I said, he’s a huge player and that’s why I’m not surprised that the top clubs in Europe are after him,” says Lothar Matthaus. And who are we to argue? We have never knowingly watched him play.

We do know how to spell his name because he has long been linked with Arsenal as well as Barcelona and PSG, and we know his buy-out clause was set at £73m but is reportedly set to drop to less than £55m this summer. And we could probably write 500 sketchy words on why he is the perfect signing for the Gunners, but the truth is that the one time we did watch him play, we were too busy writing about the mid-table mess of Tottenham to notice the centre-half who breezed through a game in which Spurs played Dele Alli as a central striker.

I’m not gonna lie, I don’t know who Upamecano is. I’ve never seen a single tweet by any Arsenal fan before this week mention him. But all of a sudden the bullshitters are coming out with a load of bollocks saying they wanted him to sign from us from the time he learnt to walk

Ferran Torres (Valencia)
‘Manchester United are reportedly prepared to meet Valencia star Ferran Torres’ £87million release clause should their swoop for Jadon Sancho fall through,’ it said in the Daily Mail and we all nodded. That sounded sensible. United should be interested in a player of that calibre who is also reportedly a target for Juventus, Liverpool, Barcelona, Real Madrid and of course Borussia Dortmund. As the perfect alternative to Sancho, he is also the perfect replacement.

We know that he is “a dribbler, fast on the wing, can play on either wing, and he has got ability and intelligence”, but only because that’s what Sky Sports pundit Guillem Balague said. We know he is “powerful, quick, steady with the ball at his feet and strong in the air” because that’s what Valencia academy director of recruitment Jose Gimenez said.

Frankly he sounds bloody brilliant and we would match his £87m buy-out clause the second the market opens if we were Manchester United or Liverpool. Even though he has just one year on his contract (thanks Google) and Dortmund have bid less than £40m.

Denis Zakaria (Borussia Mönchengladbach)
He says: “I’ve been compared to [Patrick] Vieira and [Paul] Pogba – two more players I really respect and, in a way, see as role models. When I watch videos of them I think I’d like to play that way.”

Gladbach goalkeeper Yann Sommer says: “It’s not easy to compare him to the greats of the past, but he combines many qualities that were really defined by Michel Platini and Zinedine Zidane.”

German football great Lothar Matthaüs says: “I’m glad that Gladbach have found another pearl. At his age I was earning my first stripes for Borussia. He reminds me of Toni Kroos at that age.”

Thanks guys. Five different comparisons with five really different players. Not really very useful when we have never knowingly watched Denis Zakaria play and want to make lazy reference to other players we actually have seen play.

We have checked and it seems that he has played England twice but as we were not 100% sure he was Swiss until about ten minutes ago, it’s safe to say we did not notice a £50m-rated player linked with Borussia Dortmund, Bayern München, Inter, Tottenham and Manchester United.

Thankfully, we employ other people to actually watch football…

It would be perfect, I think. I’d actually love to see that, but I suspect there’ll be no DZ without selling PP first – just from a financial perspective.