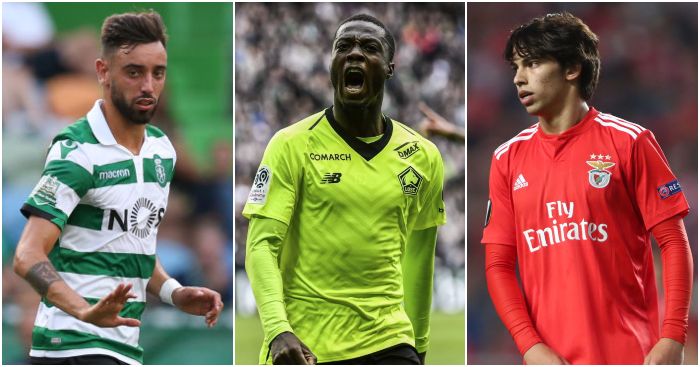 I am more than happy to admit that I have never seen any of these five £50m+ Premier League targets play even a second of association football. It’s OK to be stupid.

Bruno Fernandes
Each of those 32 goals and 18 assists in 53 games this season were, quite frankly, wasted on those of us who would rather hone their Rocket League skills or avoid Adam Sandler movies on Netflix than make time for Portugal’s Primeira Liga. The internet kindly informs that he is 24, has 12 international caps and a Sporting Lisbon contract that runs for another four years, but the uninitiated among us will have no idea of his Premier League suitability.

That Portugal avoided England in the UEFA Nations League finals helped Fernandes retain a modicum of mystery in these particularly over-saturated times. Not a single one of the six shots he took or six chances he created against Switzerland and the Netherlands in 171 minutes earlier this month were exposed to an audience who did not seek the games out; a stroll against Fabian Delph and Declan Rice would hardly have offered a true measure of his credentials.

Perhaps not even Ed Woodward has seen a five-second GIF or grainy YouTube highlights package titled ‘BRUNO FERNANDES ● GOALS | SKILLS ● Welcome to Manchester,’ set to a dubstep remix of Thin Lizzy’s seminal 1976 classic The Boys Are Back in Town, showcasing the midfielder’s brilliance. That is the only explanation as to why he is so ‘hesitant’ to meet the apparent asking price of £71m.

Join the club, (former) chief (executive). At least you know precisely what you’re going to get with Jesse Lingard.

Joao Felix
Even connoisseurs of Portuguese football might not have spotted Joao Felix until the turn of the year. The 19-year-old made his first-team debut for Benfica in August, starting just five games for them in all competitions before January.

He has hardly looked back after being linked with Liverpool that same month. Manchester United, Manchester City and Atletico Madrid have since taken an interest in a forward who earned his first Portugal cap just over two weeks ago. The aforementioned Fernandes is one of only seven players to have scored more goals in Europe’s top ten leagues this calendar year than Felix’s 13.

But Benfica’s early Champions League exit, the ongoing mystique of an underexposed domestic league and a nascent international career has combined to create a player valued at over £100m, who much of the general public will never have laid eyes on.

Yet his price tag, his statistics and his lovely little braces will inevitably leave some of those yet to even see Felix convinced that their club has to sign him. This ‘like, want, need’ culture is nothing new, after all.

Giovani Lo Celso
When BBC Sport reported at the end of May that Tottenham had lodged a club-record £53m bid for a player a matter of days before the Champions League final, it caught the wider footballing world by surprise. Within 24 hours of that story emerging, the Daily Mail, talkSPORT and football.london were among those to publish profiles asking precisely ‘Who is Giovani Lo Celso?’.

They all contained the same basic information: the age (23), the position (midfielder), the nationality (Argentinian), the current club (Real Betis), the former clubs (PSG and Rosario Central), the suggestion that he ‘also has an eye for goal’, as if that in any way differentiates him from anyone who doesn’t play in a more defensive role.

But there is a reason such transparent, SEO-driven content exists. Lo Celso joined PSG in July 2016, but did not leave South America until January 2017 after remaining on loan at Rosario. He struggled before retreating to La Liga and restoring his reputation. With 48 career starts across Europe’s top five leagues, it is hardly a surprise that he is something of an enigma.

Nicolas Pepe
For some, the fact that Nicolas Pepe scored against every team in Ligue Un’s top half this season at least once is enough. For others, the fact that Liverpool’s last two French-based signings – Fabinho and Divock Origi – went so well suffices. For the rest, the club’s scouting department have earned enough trust not to be doubted over their reported targets.

If his Lille performances are deemed of the requisite standard by Jurgen Klopp, Michael Edwards and friends, then who are @FabulousFirmino or any of the numerous Anfield cat Twitter accounts to argue? The 24-year-old has not been blessed with much of a spotlight or stage, but that does nothing to remove from his natural talent.

Signed by Marcelo Bielsa in June 2017, publicly courted by Barcelona in September 2018 and narrowly edged out by Kylian Mbappe in the vote for Ligue Un Player of the Season in May 2019; it would almost ruin the wonderful illusion to actually see him play.

If the team in charge of signings have proven anything the last few years it's that they know exactly what they're doing.

Rodri
The sacrum of Manchester City’s reconstructed spine will surely soon be their most expensive player ever, ranking joint-20th in a worldwide list based on the euro. Rodri exists mainly in transfer gossip columns but is also supposedly a UEFA Super Cup winner who has started in Champions League knockout games and earned the early Sergio Busquets comparisons.

When he turns 23 at the end of the week, Rodri will have avoided playing English teams in Europe or indeed England at international level, sitting on the bench for both Nations League matches last year. The midfielder will hope that little over three years of La Liga experience is, much like him, transferable to the Premier League.

As will Pep Guardiola, who is ready to bestow the burdensome honour of eventually replacing Fernandinho on the stocky shoulders of someone who was born the day after Spain were knocked out of Euro 96 by England. He and his team have presumably scouted Rodri extensively, but his 63-minute performance in a Community Shield penalty shootout defeat to Liverpool in August will be the first many of us see of him.