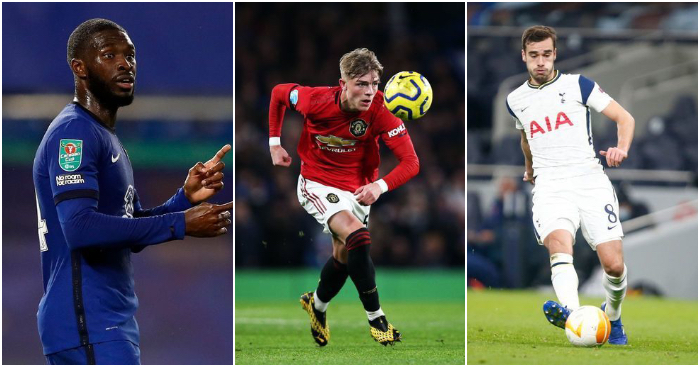 They’re ‘one of our own’ but should be someone else’s. These five academy graduates should really be looking to make a move in January…

Fikayo Tomori
Let’s examine the changing fortunes of Fikayo Tomori through Frank Lampard quotes. Firstly, the then Derby manager’s reaction to the on loan defender being awarded Player of the Year in July 2019…

“It’s scary to think how good he can be. He can go to the top and can get better.”

By September 2019, Tomori had established himself as one of Chelsea’s top two centre-backs, and Lampard defended his selection over more experienced options.

“They are really playing well. Age isn’t a huge factor, it’s not the huge factor in the actual situation.”

A month later, Lampard explained what a pleasure it was to work with Tomori after he had earned an England call-up.

“The England squad is another natural progression and I am really pleased with him because he deserves it and he has been a dream to work with day in day out for the last 15 months or so.”

Then, something happened. It’s really not clear exactly what. He was dropped after a 2-1 away win over Arsenal at the end of December 2019 – shortly after signing a new long-term deal – and has started one Premier League game since. Lampard’s comments in February 2020 hint that it may have been connected to a poor attitude in training…

“With Fik he always has to train at the top level, that goes for all of the young players because when you are out of the team, however much it hurts, you need to show a good attitude and train very well.”

With Tomori in the side, Chelsea averaged 1.9 points per game; without him they’ve earned 1.6 points per game. Tomori nearly joined West Ham in the summer, but said he wanted to stay at Stamford Bridge and fight for his place.

Good then that Lampard gave him very clear instructions in September as to what he needed to do to get back into the team, with another subtle jibe at an apparent dip in attitude for presumably minor parts of last season…

“There’s nothing specific I want him to improve, all I want him to do is work hard, show the work ethic he’s shown me at Derby and for major parts of last season.”

“I’ve got no problem with Fikayo, I rely on him.”

No you don’t, you don’t play him. And now that Lampard admits Tomori is free to leave on loan, his work ethic is – once again – top notch…

“But his attitude, even though he hasn’t played much recently, has been fantastic in training and in how he is.”

AC Milan and Newcastle are among those interested in a loan move. He’s got to get out.

Axel Tuanzebe
His brilliant performance in the 2-1 win over Paris Saint-Germain looked like the watershed moment for Tuanzebe. The 23-year-old, hampered significantly by injury in recent seasons, was coming good just as United were struggling defensively.

Then came the 2-1 defeat to Istanbul Baseksehir. Having been hauled off at half time amid the embarrassment (for which he was only very slightly to blame), he’s started just once since – the League Cup quarter-final victory over Everton.

Had they won that Champions League game, it could all have been very different for Tuanzebe and for Manchester United who, to be fair, are doing pretty damn well without him; they haven’t lost in the 11 Premier League games since, winning nine of them.

The Athletic claim United still see Tuanzebe as the next Nemanja Vidic or Rio Ferdinand, but the latter says he needs to be playing football.

“As a kid, he was talked about being the next big thing as a centre-back,” Ferdinand said. “Surely you want to play and if not, you have to ask yourself questions.”

Brandon Williams
It’s no surprise that Solskjaer ‘blocked’ the loan exit of Brandon Williams in the summer. It’s incredible to think now – with United’s current results and stellar individual performances – but Williams was one of the shining lights last season.

But with Luke Shaw’s return to fitness and form, as well as the summer acquisition of Alex Telles, Williams has played just six minutes of Premier League football with his only starts coming in domestic cup competitions.

Solskjaer said back in July that Williams “deserved” to be playing more, based presumably on his attitude. But, in reality, as it stands, he’s just not as good at football as Shaw or Telles.

Southampton are the team most consistently linked with a loan move, with Ralph Hasenhuttl a reported admirer of his versatility: a tell-tale indication of a squad player. He’s unlikely to get in their starting line-up ahead of Kyle Walker-Peters or Ryan Bertrand.

He’d be better off going to Newcastle – who are also rumoured to be interested. He could pick his spot there. Maybe even pick the team.

Eric Garcia
You can imagine Eric Garcia’s state of mind as Manchester City spent another £100million on two new centre-backs in the summer. But his frustration may have been eased somewhat after he started two of the opening five Premier League games.

Safe in the knowledge that Barcelona would be coming back in for him after he announced he would not be signing a new contract at the Etihad, playing every now and again would be fine. There are some very good defenders at the club, it makes sense to share the load. But then, John Stones?! That must hurt.

Sure enough, Barcelona have come back in for him, and having been Stones’d, he’s desperate to leave now rather than in the summer – when he can leave for free – and the Catalans are reportedly providing a £9million escape chute.

Harry Winks
“I’ve got Spanish grandparents,” said Winks in 2017, in preparation for his loan move to Valencia in 2021.

It’s probably not going to happen. Mourinho has said there is ‘no chance’ and with Winks starting Tottenham’s last three Premier League games, his fears over a lack of game time will have been allayed somewhat.

But Valencia are said to be very keen and with Moussa Sissoko, Tanguy Ndombele and Giovani Lo Celso all battling for a spot or two alongside Pierre-Emile Hojbjerg, Winks is likely to sit out more often than not.