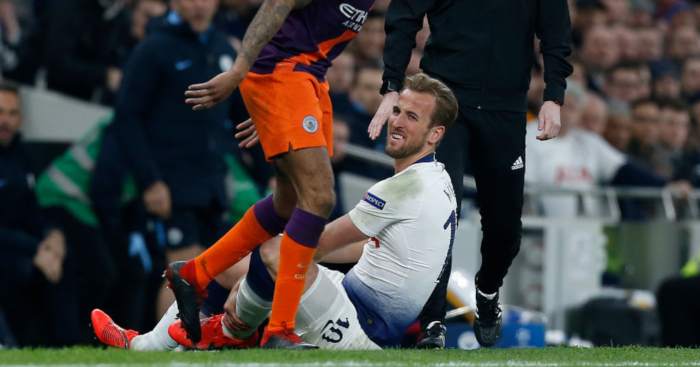 Tottenham manager Mauricio Pochettino accepted the thought of being injury prone could play on Harry Kane’s mind after his latest setback.

The England captain will find out the full extent of his ankle ligament problem next week when he visits a specialist but he looks set to miss the rest of the season, starting with Saturday’s lunchtime visit of Huddersfield.

Kane suffered his fifth ankle ligament injury since September 2016 in a challenge with Fabian Delph during Spurs’ 1-0 Champions League win over Manchester City on Tuesday, and his second in three months.

Although Kane has quick powers of recovery, returning ahead of schedule on a number of occasions, Pochettino has said it will be tough for him to play again this season.

Asked whether his talisman is injury prone, Pochettino replied: “Yes, for sure it can be an issue.

“When you suffer once, twice or a third time, it’s normal in your head that you will always think about it.

“But I don’t believe it will be a big problem. I think we are going to help and, with experience, we can make it different in the future and hope it will be the last time he gets an injury with his ankle.”

A leading surgeon has said that Kane might have to consider surgery in order to prevent him from being susceptible to this type of injury in the future.

Mark Davies, a leading specialist at the London Foot and Ankle Centre who has operated on Premier League footballers, told Press Association Sport: “At some point I think they would think about doing something surgically to stabilise the ligament, which is quite feasible and should prevent the problem happening in the long term.”

Pochettino did not allude as to whether surgery would be needed but did say Spurs have plans in place for Kane’s recovery.

“Today there are a lot of techniques to try to help that and not become chronic and, of course, because we have very good people here,” he said.

“We are maybe going to do some situations to help. We have some ideas to help him to recover as soon as possible and make his ankle strong.

“I don’t believe it’s going to be a chronic problem.”

Kane suffered the injury after twisting his ankle when he clattered into Delph after being on the end of some rough treatment from City players.

It was a needless challenge, made on the halfway line, but Pochettino insists that sort of commitment makes Kane the player he is and he cannot change him.

“It’s true that now we can have an opinion that it was a challenge with not too much need for it,” added Pochettino. “He’s strong. He wants to challenge for every single ball with the opponent.

“Of course, now watching the action, you say, ‘Oh Harry, why not stop before? There’s nothing to do with this ball in the middle, on the halfway line’.

“But it shows how he is. He is Harry Kane because he behaves like this in the past.

“Now the bad luck means that he’s got an injury but he is how he is.”