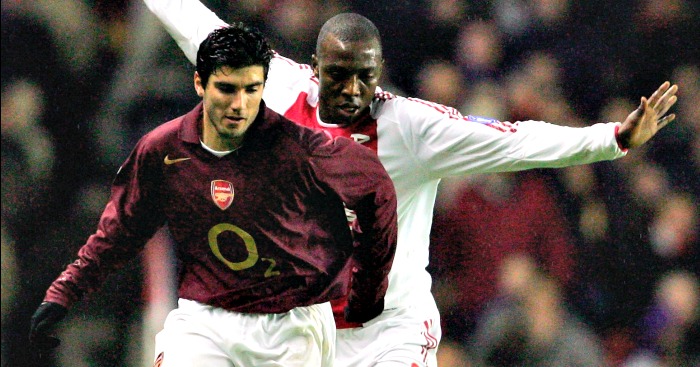 Karim Benzema
“I laugh about it with my brother and my friends. We wait for the media to come out with these rumours.”

For Karim Benzema, there’s enough material to produce a comedy series. Since rumours surfaced that Arsenal wanted to replace Emmanuel Adebayor with then Lyon striker Benzema in the summer of 2008, the Gunners have been constantly linked with the Frenchman.

You’d think signing for Real Madrid in 2009 would put an end to the rumours, but not so. The Daily Mail reported that Arsenal had made a £27million bid for the striker in 2011, while The Sun reported the fee as £35m. The summer of 2012 brought rumours that Real Madrid’s pusuit of Radamel Falcao would facilitate an Arsenal move for Benzema. How times have changed.

The rumour was cranked up a notch the following summer, with the Daily Express reporting that Arsene Wenger was ‘obsessed’ with signing his countryman, while the ever-reliable David Ornstein of the BBC set pulses racing at the Emirates after confirming the club were interested in both Benzema and Angel di Maria. The Daily Telegraph and ESPN introduced a £40million valuation to proceedings. Last summer was no different, with the Metro actually reporting that Wenger had phoned Benzema with a view to discussing a deal.

If Benzema was left laughing at the rumours earlier this year, we recommend he checks the November transfer gossip sections for some much-needed comic relief. Fichajes are reporting that Arsenal want Benzema in January. Christ.

Gonzalo Higuain
It’s not often the prestige and respect demanded by the Emirates Cup is threatened, but so it came to pass in 2013. The sight of Gonzalo Higuain stepping onto the pitch for new club Napoli elicited a chrous of boos from Arsenal fans ahead of the clash after the Argentinean striker’s move to the Gunners broke down just months earlier.

After being linked to Higuain since his spell at Real Madrid in 2009, the move seemed destined to go through two years ago. The Guardian reported that Higuain had flown into London to complete a £23million deal, while The Independent claimed the striker would become Arsenal’s highest paid player. The Daily Star went a bit mental, reporting that Arsenal would try and sign Higuain, Luis Suarez and Wayne Rooney all in one go.

Just one year removed from joining Napoli, the links were back. The Daily Express reported an ‘£80million chase’ between the Gunners and Liverpool for Higuain, while the rumours resurfaced yet again earlier this year.

Yoann Gourcuff
‘Arsenal are to make a £15 million move for AC Milan midfielder Yoann Gourcuff.’ Eight years on from the Daily Telegraph‘s report, Arsenal are yet to make that move.

This rumour started as far back as 2006 when Gourcuff was with Rennes, and the full circle was completed earlier this year. Ahead of rejoining the French club in September, the Gunners were linked with the 29-year-old on a free transfer simply to evoke the memories of a happier time.

Hatem Trabelsi
It’s 2015, and Hatem Trabelsi has completed a decade of service at treble winners Arsenal, with the club confirming that Real Madrid pair Abou Diaby and Amaury Bischoff will return for the right-back’s testimonial. Save and exit game.

Football video games face the unenviable task of updating their squad lists to reflect the plethora of deals in the summer transfer window, but Pro Evolution Soccer shot their figurative load in 2004. With rumours abound that Arsenal had signed Trabelsi, they inserted the Ajax defender into the Gunners squad for that year’s edition of the game.

‘Arsenal sign Trabelsi in £4m move’ reads the headline on a Daily Mail piece from July 2004, coming after Trabelsi’s successful trial at the club. Personal reasons dictated that the deal never went through, and while the BBC reported that Trabelsi ‘had been offered a contract’ at the club again in 2006, the Tunisian instead joined Manchester City with his status as an Arsenal legend preserved.

Sebastien Frey
As Arseblog put it in July 2013: ‘For the 15th successive summer, Arsenal have missed out on the signing of Sebastien Frey.’

The rumour of Frey joining Arsenal is perhaps the longest running transfer saga of all time. Reports of interest first emanated in The Guardian way back in May of 1997, with Frey a then 17-year-old keeper at Cannes. To put that into context, ‘Frey to Arsenal’ is just two years younger than Hector Bellerin.

The Daily Telegraph reported that Frey would join the Gunners for £5m in 2003 to replace David Seaman, while Sky Sports claimed the following in a cruel twist of fate from 2004:

‘Chelsea are close to tying up a deal for Rennes keeper Petr Cech, leaving Arsenal as clear favourites to sign Sebastien Frey.’

If Wenger has any semblance of love for the beautiful game, he will surely scour the list of free agents to find the name of a ‘Frey, Sebastien’, still just 35 years of age, in order to conclude an 18-year-old transfer rumour.