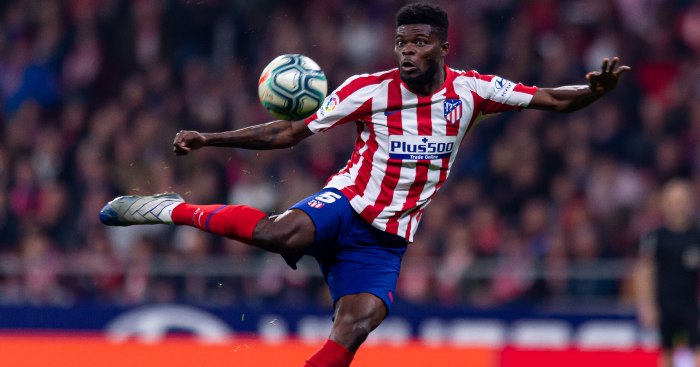 Mikel Arteta has got one hell of a job on his hands at Arsenal. If that wasn’t obvious before lockdown, two defeats and days of paper inches filled by their ignominious frizzy haired duo, it has been cemented as a reality now. It was difficult to come up with five players that would improve Liverpool, and in some ways even tougher to do so for Manchester United. Not so for Arsenal, but we’re going to limit ourselves. Here’s five players Arsenal can realistically sign, that would improve them for next season…

N.B. We’re going to assume Pierre-Emerick Aubameyang will stay. Hopefully that positive feeling can carry you through…

Thiago Silva
The horse may have already bolted on this one. Thiago Silva will leave PSG on a free transfer at the end of the season, with the Premier League his preferred destination. But rumours of Arsenal moving for the Brazilian were based around the idea he would come in to replace his compatriot, David Luiz.

Handing Luiz a new contract is not entirely ridiculous. Mikel Arteta clearly values his dressing room influence, his experience and winning mentality. And although the mistakes he made in the 25 minutes of insanity against Manchester City have become a bit of a Luiz staple, so too is the leadership he exhibited after the game, publicly taking the blame for the defeat on his shoulders. He remains visible in the good times and the bad; he’s had plenty of both.

But while Luiz is renowned for his mercurial brilliance, just as likely to ping a pass on to the toe of a striker through on goal as he is to slice the ball into his own net, Silva is calm, assured and dominant. And Silva could be Arsenal’s ‘daddy’ instead couldn’t he? Sure, it’s more difficult to picture him taking the kids on a spontaneous trip to Disneyland, but he’s also far less likely to lock them in the car when they get there.

Willian
Arsenal have got a brilliant right winger. Nicolas Pepe cost them £72million, and he has shown at least a few examples as to why. The problem has been that the occasions of brilliance have been infrequent. His beautiful curled effort against Brighton – a carbon copy of a goal he scored against West Ham earlier in the season – is the reason they bought him. Cutting in from that right side, he’s one of those players that you know exactly what he’s going to do, but can do very little to stop him.

But as is often the case with players of his sort – slight of build, skilful wingers – he’s taking time to settle. Which is difficult enough in a team playing well, let alone one as lacking in confidence and leadership as this Arsenal side. To expect a young player to join and single-handedly drag his teammates through games is unfair. They can’t all be Bruno Fernandes.

Arsenal need someone to share the burden, and Willian should be that man. The Brazilian and Pedro are often lumped in together as the Chelsea rejects, too old for the Blues and way past their best. But while that may be true of Pedro, Willian still has plenty left to offer. There is no noticeable drop off in the incredible acceleration that makes him so difficult to deal with, and if it wasn’t for Chelsea’s policy of only offering short contracts to players over 30, he would be going nowhere; Frank Lampard has said as much.

And he also plays his best football in teams that are under-performing. He’s won the Player of the Year award twice at Chelsea, when they finished fifth in 2018 and tenth in 2016 – the two lowest Premier League finishes since he’s been at the club. He has thrived when others have faltered, and can do so again at Arsenal.

Orkun Kokcu
The £350,000-a-week contract handed to Mesut Ozil in 2018 is one of the worst bits of business a Premier League club has ever done. Fair enough, he wasn’t playing all that badly at that point, and it would have cost a fair bit to replace a player of his obvious talent; they weren’t to know he would give quite so few s**ts about the club a couple of years down the line.

But it’s caused no end of subsequent problems. Arsenal are now understandably reticent to offer other players similar deals, whether they deserve them or not, meaning Aubameyang’s future still hangs in the balance. Arteta is constantly forced to field questions about Ozil’s absence from the team, or even the squad, where he has to pretend he’s injured, or “not ready”. The truth – that the quality he brings isn’t worth the added pain for the rest of his team, working their arses off to cover for his laziness amid his unwarranted air of supremacy – is not worth the hassle.

And this may be totally unfair, but he doesn’t give you the impression, like Luiz does, that his work with the young players off the pitch makes his presence in the dressing room worth it. Not that any number of pep talks could justify £18million a year.

But I digress. The man Arsenal have been linked with to replace Ozil is Orkun Kokcu. The 19-year-old has three goals and six assists for Feyenoord this season, and the Gunners are said to have been in talks with the Eredivisie club over a £23million move.

Able to pick a pass like Ozil, but also to run with the ball at pace, he’s comfortable as a number ten or a number eight, offering flexibility as well as obvious raw talent. Sounds familiar.

Thomas Partey
Arsenal’s midfield is a nightmare. Matteo Guendouzi is a petulant child who points, shouts, looks busy, but isn’t actually that good. Granit ‘f*** off’ Xhaka has done well to reintegrate himself into the team but has always promised far more than he’s delivered. And Lucas Torreira has all the attributes to succeed, but is perennially injured.

Thomas Partey would be the ideal man to get. His technique, positioning and reading of the game aside, he’s worked under arguably the best defensive coach in world football in Diego Simeone. And apparently he is keen on a move to the Emirates.

Atletico Madrid have admitted they would be willing to listen to offers for Partey, as they try to gather funds to improve other areas of their team. But he won’t come cheap. The midfielder’s buyout clause is reportedly set at £45million, which sounds like too much for what is widely regarded to be a cash-strapped Arsenal.

VIDEO: Arteta asked about reports linking us with a move for Thomas Partey #afc pic.twitter.com/rVivzc3o5Y

The fact that Arteta laughed when asked about the signing of the 27-year-old in his latest zoom-call-cum-hostage-video doesn’t bode well, but he then added: “We have to assess the financial situation and whether we have a very narrow gap or a bigger gap to do any deals.” It may be the case that Arsenal have to sell to be able to buy. What is the going rate for deadwood these days?

Dayot Upamecano
It’s hard to remember Arsenal having a solid defence. In fact, if you’re under the age of about 15, you would have to imagine it. But that could genuinely, actually change should RB Leipzig keep their promise.

Dayot Upamecano is one of the best young defenders in Europe, and Arsenal have been courting the 21-year-old for quite some time. He has one year left on his current contract, and Leipzig’s chief executive, Oliver Mintzlaff, said recently: “One thing we know is that we have a very clear understanding with him and his adviser, that we will not let him go free.”

With William Saliba set to come into the side following his loan season at Saint-Etienne, Arsenal would still likely be in a situation where they would chop and change his partner all season with the rest of them all much of a muchness. Upamecano would be their superior, offering an improvement in passing, reading of the game and recovery speed.

But Lampard and those Chelsea tricksters – who also desperately need a centre-back or two – have entered the race for Upamecano, and may hold the upper hand according to The Athletic, having already completed a deal with Leipzig for Timo Werner.

Maybe they had their fingers crossed when they made that promise? There’s just no accounting for such duplicity.