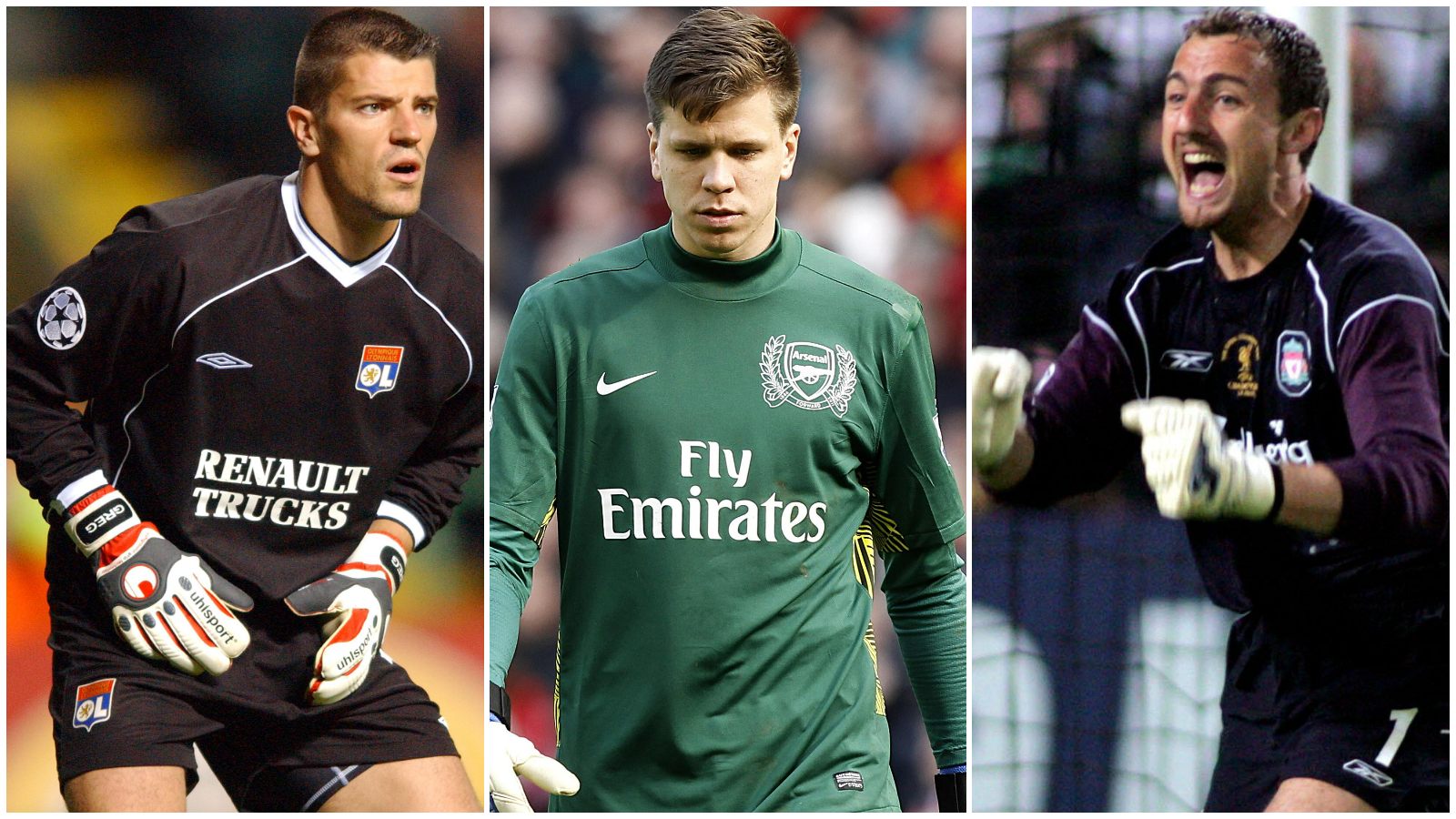 Illan Meslier made a superb double save on Sunday to deny Philippe Coutinho and keep Leeds level in their friendly against Aston Villa. Then BT Sport, the absolute b*stards, oversold it somewhat and sent us down a shot-stopping rabbit hole on the sunniest day of the year…

Excluding the ones we’ve forgotten or couldn’t find videos for, here are the five best double saves that sprang to mind…

Wojciech Szczesny – Liverpool v ARSENAL, 2012.
Meslier’s double drop wasn’t even the best by a Premier League keeper stopping a Prem striker’s penalty before keeping out the rebound too.

That rather niche award goes to Wojciech Szczesny, who kept out Duyt Kuyt twice in Arsenal’s 2-1 win at Anfield in March 2012.

The Arsenal keeper cleaned up his own mess after bringing down Luis Suarez. With Liverpool having already missed five penalties that season, Kuyt grabbed the ball and sent it to Szczesny’s right but the Poland stopper read it and parried back into play. Presented with a second opportunity, Kuyt aimed for the opposite side and though he shanked his attempt, it still took an incredible change of direction from Szczesny to get across and keep the scores level.

For three minutes at least before Laurent Koscielny sliced hopelessly into his own net. But Arsenal turned it around, winning thanks to a stoppage-time strike from Robin van Persie.

Jerzy Dudek – LIVERPOOL V AC Milan, 2005.
This was hardly the best double save of all time for technique or athleticism, but it might have been the most important.

Liverpool were three minutes from a Champions League final penalty shoot-out having clawed back a three-goal deficit in Istanbul. But all that good work looked set to go to waste when Andriy Shevchenko rose to meet a Serginho cross.

Dudek, retreating deeper to his line, blocked the striker’s powerful header but the ball bounced up two yards in front of goal, perfectly into the path of Shevchenko, still on the run. With Dudek on his knees, a winner for Milan looked inevitable, certainly when Shevchenko made a clean contact, thundering the rebound towards the gaping goal.

But Dudek raised his arm and the ball tw*tted against his hand. Really, it ought to have taken his fingers off but instead, from underneath the crossbar, the ball was somehow diverted over it. Dudek could barely hide his pride. A rare feeling, apparently.

“For the very first time in my life I was proud of myself,” wrote Dudek in his autobiography. “It was a moment I will never forget. Something people remember me for. They called the 2005 Champions League final the ‘Miracle of Istanbul’. Well, this was my miracle. The save of my career. Of my life.”

🇵🇱 This Jerzy Dudek double save in the 117th minute of extra time always gets looked over when we talk about that Istanbul comeback!

Jim Montgomery – Leeds v SUNDERLAND, 1973
Wearsiders would contest the argument that Dudek’s was the most important. And Montgomery’s owed nothing to good luck. It was a phenomenal, logic-defying piece of goalkeeping to earn second division Sunderland one of the greatest FA Cup final wins ever.

The save from Trevor Cherry’s diving header was special enough but to recover his ground in time to turn Peter Lorimer’s rebound from inside the six-yard box onto the crossbar earned Montgomery a place in FA Cup folklore.

The Black Cats’ keeper made mugs not only of Leeds but also of both BBC and ITV commentators: “And Lorimer makes it one each!” declared David Coleman before his brain processed what had just happened. Brian Moore struggled to fathom it too: “Cherry going in… and a great save… and a goal! No! My goodness, I thought Lorimer had got that one.”

So did Lorimer. And over 40 years later, in 2014, the Leeds striker insisted he couldn’t have been more clinical: “If I had that chance again, I wouldn’t do anything different. I got a good clean contact, hit the target and somehow Jim knocked it onto the crossbar and saved the day for them.”

Jim Montgomery with what has been dubbed as ‘the greatest double save of all time’.#GKBlog #Sunderland

Gregory Coupet – Barcelona v LYON
It would take a brave man to contest that Montgomery’s is the best double save ever. But Coupet’s was certainly the most creative.

Necessity is the mother of invention, and playing behind Claudio Cacapa certainly required some clever thinking – a few ex-Newcastle keepers will testify to that. So when the centre-back sent a back pass – on the stretch, it must be said – looping over his own keeper, Coupet had a choice. The sensible option: turn the ball over the bar with his hand at the cost of an indirect free-kick; or the maverick choice: take off and hope to reach it with his noggin’.

Thankfully for us all, Coupet chose correctly. And with his head, the keeper made an incredible save, but he could only divert the danger. After the ball lopped off the bar, Rivaldo had the free-est of free headers with Coupet in a heap behind his line.

It wasn’t a bad header. Actually, it was textbook. Firm, down and towards the corner. Which made Coupet’s recovery all the more extraordinary…

Oblak came up big three times in quick succession to help give Atletico safe passage into the Champions League quarter-finals. His sheet was clean only because of a stupendous series of saves to thwart Julian Brandt initially, then twice he kept out Kevin Volland.

The first stop, to win the one-on-one battle was Brandt was top drawer – Oblak followed all the correct procedures to stay big and narrow the shooter’s angle. The two from Volland, though, illustrated the kind of athleticism and, more crucially, mentality that makes Oblak the world-class keeper he is.

That type of stubborn refusal to be beaten is often what separates the good from the great. Had the third rebound gone in rather than whistle past the post, it would have been one of the greatest Champions League injustices.

🧤 Jan Oblak with a remarkable triple save 5 years ago today 🙌 🙌 🙌#UCL pic.twitter.com/MxNJykfSMH