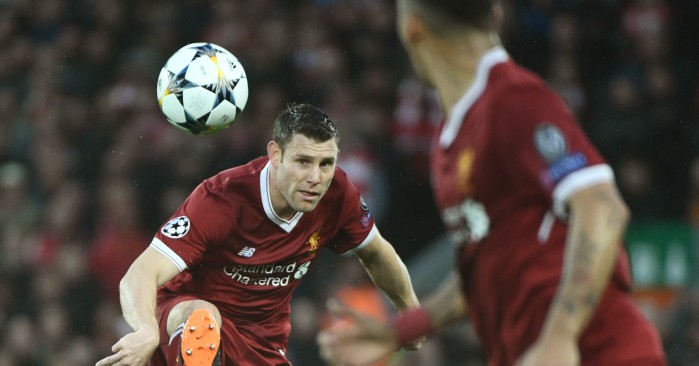 It would have been Wayne Rooney, but he costs all of the money every week and he’s been a bit rubbish anyway…

JAMES MILNER (Liverpool)
The year was 2015, the player was James Milner, the releasing club was Manchester City, the embracing club was Liverpool and the fans who were a little underwhelmed but welcomed Milner were wearing red. Less than three years later, Liverpool have all but two toes in the final of the Champions League and Milner has equalled the record for most assists in one season of the competition. Whether as central midfielder, winger or right-back, the two-times Premier League winner has been Mr Dependable. Against Roma he was Mr Bloody Brilliant.

Handball aside (not seen the replay), thought James Milner gave one of the most complete central midfield performance by an LFC player since Steven Gerrard's prime. Can't give more praise than that.

TOM HEATON (Burnley)
Sean Dyche’s first permanent signing as Burnley manager in the summer of 2013 will probably go down in Clarets history as his finest. Eyebrows were raised when Dyche signed the goalkeeper who had picked the ball out of the net more often than any other during his season with relegated Bristol City, but – prior to this injury-hit season – Heaton had barely missed a match (or catch) in Burnley colours. Six years after leaving Manchester United, he was at Euro 2016 as England’s No. 23.  He may now have been overshadowed by the unexpectedly excellent form of Nick Pope, but Heaton remains a ridiculously good free transfer.

JOEL MATIP (Liverpool)
Before Virgil van Dijk came along, all Liverpool hope was pinned on Dejan Lovren and Joel Matip. That’s not a whole lot of hope. The truth is that Matip had been excellent in his first season in Liverpool colours following his free transfer from Schalke – “I know in England it is really difficult to sign a player without paying a transfer fee, but I thought it cannot be a reason not to take him only because you cannot put a number behind his name”, said Klopp – but this season he was error-prone before he was injury-prone. Still, he is value for money…

MARC ALBRIGHTON (Leicester City)
“Believe it or not we couldn’t afford to keep him at Aston Villa,” said Paul Lambert recently when asked why Villa had allowed Marc Albrighton to leave his boyhood club for nothing. “It’s been the best thing, to leave, as I was getting a bit complacent,” said Albrighton two years after his shock exit when he was on the verge of claiming the Premier League title after an ever-present season for Leicester City. There has been plenty written about the bargain signings of N’Golo Kante, Riyard Mahrez and Jamie Vardy, but none were quite as bargainous as the free Albrighton.

ERIC MAXIM CHOUPO-MOTING (Stoke City)
“I think people who don’t know an enormous amount about him will be pleasantly surprised by his undoubted ability,” said then-Stoke manager Mark Hughes after clinching the signing of the Cameroonian from Schalke. What is it about Schalke allowing Cameroonians to leave for nothing? Anyway, Stoke fans have been largely unimpressed (despite an unlikely two-goal salvo against Manchester United) but Choupo-Moting’s statistics (five PL goals, five PL assists) have prompted links with Newcastle United. This time he won’t be free.

😂😂😂. Graeme. Mate. Choupo Moting has been absolutely terrible. Hopeless footballer and the fact we replaced Arnie with him is indicative of how terribly our club has been managed over the last 2 years. https://t.co/W0UaR0Fn59