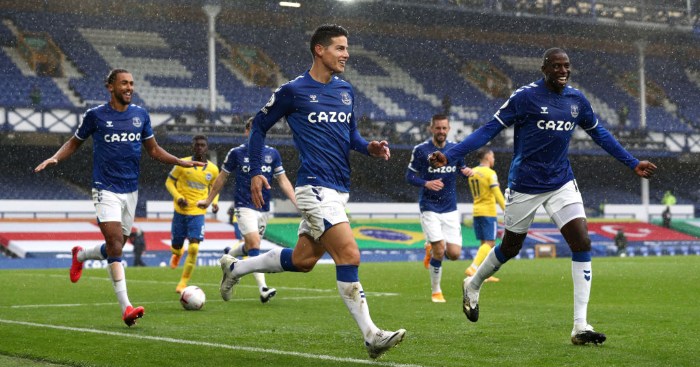 As the international break stretches out before us like a long river of crud, let’s instead look back and enjoy the surreal and ridiculous and ultimately magnificent start to this season’s Premier League campaign. There are literally loads of reasons why it’s been great – we didn’t even get round to Leeds – but here are five for starters.

Everton have been dreary for a long time. They’ve finished no higher than seventh and no lower than 12th for the last six years, and for the last couple of years they’ve had to endure that mid-table malaise while watching those gobshites from across Stanley Park build one of the great teams under a charismatic and brilliant manager. Everton fans can no longer sustain themselves on a diet of Liverpool hubris. The last couple of years have been tough, with Liverpool winning national, European and global titles while Everton remained resolutely dull.

Everton are no longer dull. They are an absolute life-affirming joy. James Rodriguez’s hair and assists and energy. Dominic Calvert-Lewin’s thighs and goals and next-Harry-Kaneness. Getting Carlo Ancelotti as manager was quite a coup given the aforementioned years and years of drudgery that preceded his appointment. It was always likely to make things better. But no Toffee in their wildest dreams could have thought it would be this good this quickly. Of course it could all go completely to sh*t at any moment, but that’s also part of the thrill.

We freely admit we’re generalising here, but Everton are also a great bunch of lads. Everton were big enough in the 80s that everyone of a certain age will still know at least one Everton fan. Think of the Everton fan you know. Sound, aren’t they? Thought so. Everton fans are sound. They deserve this. For at least a few months anyway, by which time if they and their team haven’t calmed down, they will themselves be walking the league and in need of bringing down a peg or two.

Obviously. Goals are fun. And while all these goals might eventually rot our teeth and make us sick, for now we’ll enjoy the sugar rush thank you very much. We’ve already had three 5-2s, a 6-1 and a 7-2 and the season isn’t even four full match-weeks old. It almost certainly can’t last. This international break, curse its bones, might itself offer enough of a reset for the Premier League to return to something like normality. But let’s hope not.

A season that began with the champions scrambling to a helter-skelter 4-3 win at home against a newly promoted side has, magnificently, only got more deranged. Long may it continue.

3) The goalvolution will be televised

And all those lovely, lovely goals have been live on the telly. While I do sympathise with match-going fans who are missing the unmatchable visceral thrill of Being There, I can’t understand some of the harrumphing about all the games being on the box. There’s a sense with some that this is a Rubicon crossed, a hammer blow in favour of armchair supporters over those who actually get (or got) off their arses and go to the games.

But in the year of our lord 2020 it really isn’t weird for all the matches from the country’s most popular sporting league to be on television; it’s weird that they weren’t. Like home-working and cashless payments, the ‘rona has merely hastened along something that was already happening and already inexorable. It’s now possible to watch Premier League football pretty much non-stop all weekend. We’d be up for that even if it wasn’t all non-stop goals and nonsense.

4) The big clubs getting twatted

This is objectively brilliant. Fans of the biggest clubs might not want to hear it, but everyone else hates you and they enjoy it when you suffer a tiny little bit for a tiny little while.

Beyond that basic thrill, though, it’s added a frisson to the goal rush. Liverpool’s mind-melting defeat at Villa really was the cherry atop an already outrageously iced cake because now everyone else can dare to dream.

Before Sunday night, we’d all had a lot of fun but it still looked just as likely as ever – more likely if anything – that despite, or even because of, all the wildly unpredictable nonsense that was befalling the division, Liverpool were still obviously going to predictably walk the league.

Now this is no criticism or slur on Liverpool; it’s credit to the sustained and unremitting nature of their excellence for the last two years that it had started to get a bit boring for everyone else. But after Sunday’s thrashing at Villa, Liverpool now only probably win the league by 15 points instead of definitely. And that’s much more exciting for everyone else.

Harry Kane is, and has been for five years now, a genuinely ridiculous footballer with genuinely ridiculous numbers. He is also English and has been consistently brilliant for a very long time for England. Despite all this, he remains mystifyingly under-rated in a country that usually has the exact opposite problem. Whether it’s because he doesn’t look or sound like what we expect a modern football superstar to look and sound like, or whether it’s because literally everyone is a bit embarrassed about thinking he was a one-season wonder, or whether it’s just that he only plays for Spurs, I’m not sure.

But the greatest thing about Kane is that he is constantly ready to trip people up by not being the player you thought he was. The stats lads have been gunning for him for years, grabbing greedily at any opportunity to suggest the purple patch is finally over after all these years, and the long-awaited inevitable regression to the mean (which was and always will be his loan spell at Norwich) has finally happened. But he’s always one step ahead.

He’s a far more rounded and intelligent footballer than many give him credit for, and is constantly evolving. His injuries have robbed him of whatever pace he once had, and we are already witnessing Harry Kane 2.0. Brilliantly, that means a striker derided as a tap-in and penalty merchant (which he has never been by the way, but that’s another chat) and who as recently as last week was still being described as “selfish” turning into a De Bruyne-esque creator. It’s a brilliant plot twist, and, be honest, none of you saw it coming. He’s already set up six Premier League goals this season, four of them in a single game for Heung-Min Son in a bonkers 5-2 win at Southampton that was one of the early indicators that this season was off its tits.