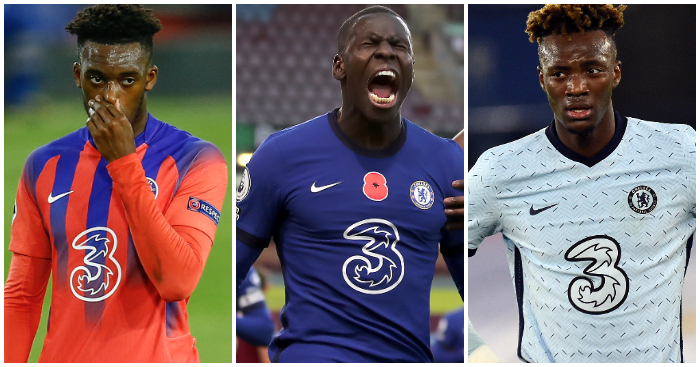 Tammy Abraham
The appointment of Tuchel is great news for Timo Werner and Kai Havertz. Which spells trouble for Abraham…

Tuchel has been hired to get the best out of Chelsea’s two big summer signings. Which means playing both in their preferred positions. For Werner, that almost certainly means a more central role.

The Germany striker has been shifted around Lampard’s frontline and though he can play coming off the left, there is no doubt that he is more effective closer to goal. Werner had a tendency at RB Leipzig to drift to the left side to start counter-attacks but he is certainly not a conventional winger. And why restrict him to the flank when Chelsea are awash with actual wingers?

So with Tuchel tasked with playing Werner until he stumbles upon some form, Abraham – and Olivier Giroud – will surely suffer as a consequence.

Kurt Zouma
Tuchel is German. Antonio Rudiger is German. Zouma is not German. Which until now was not a problem for the Frenchman.

Lampard took against Rudiger before the start of this season and Zouma profited from the former Roma defender’s exile. Zouma enjoyed a run in the side alongside Thiago Silva, missing only two of Chelsea’s opening 17 games of the Premier League season. But when sh*t was being flung at the fan amid the Blues’ slump in form, Zouma found himself back on the bench and Rudiger was recalled.

We can expect that to remain the case, certainly while Tuchel gets his feet under the table at Stamford Bridge. Rudiger remains highly rated in his homeland, still featuring for the national team even while Lampard wanted him nowhere near his defence. For reasons which still aren’t entirely clear.

Rudiger has eased himself back into the side, alongside Thiago Silva, who enjoyed success with Tuchel at PSG. The boost he will enjoy from outlasting Lampard while working under a compatriot will provide a platform for the 27-year-old to cement his place in the Blues defence while seeking to prove himself worthy of a new contract.

Callum Hudson-Odoi
Hudson-Odoi struggled to get a game under Lampard this season. Given Tuchel’s familiarity with Christian Pulisic, that is unlikely to change any time soon.

The regime change comes at a bad time for the England winger. He was just building a case for inclusion in the Chelsea XI with some influential performances off the bench, even if he fluffed his chance when it came at Leicester last week. But so too did everyone else.

His form compared well with Pulisic’s recent contribution. The USA winger hasn’t offered a goal or an assist in his last nine games, while Hudson-Odoi has had a hand in five goals in his last seven appearances since coming on as a half-time substitute in the dire defeat to Arsenal on Boxing Day.

But Tuchel has left out bigger names to get Pulisic in his side before. It was the German coach who gave Pulisic his breakthrough at Borussia Dortmund, with one of Pierre-Emerick Aubameyang, Marco Reus or Ousmane Dembele omitted to get the then-teenager into his team.

Pulisic and Hakim Ziyech appear certain to be Tuchel’s starting wingers until something changes his mind. Hudson-Odoi is unlikely to get many chances in the short term to sway his thinking.

Mason Mount
There’s nothing really for Mount to fear other than the unknown.

Aside from a season at Vitesse Arnheim, the midfielder hasn’t experienced senior football without Lampard’s guidance. The axed manager bossed Mount at Derby in his breakthrough season in 2018/19 and both made their returns to Stamford Bridge at the same time.

Since then, Mount has been a mainstay in Lampard’s midfield and the poster boy for Chelsea’s promotion of youth while they weren’t allowed to recruit. The 22-year-old featured in all but two of Chelsea’s games in all competitions last season and 27 times this term.

Mount deserved the faith Lampard placed in him. He has been one of Chelsea’s few shining lights this season. But the task of proving himself all over again to a manager not named Frank James Lampard is something completely new to the England midfielder. What will Henry Winter do if he is discarded?

Cesar Azpilicueta
It is hard to foresee the axing of the manager being anything but bad news for the captain.

Many Chelsea fans reckon Azpilicueta should already have been thanked for his service on his way through the door but Lampard saw the 31-year-old’s leadership as an essential quality, especially while he made a show of promoting youth. When times got tough over the last month, Azpilicueta was restored to the side.

But Tuchel, the man once described by Dani Alves as ‘a German with a Brazilian soul’, prefers his full-backs with a little more adventure than Azpilicueta can offer. Reece James may be raw but the 21-year-old provides a far greater attacking threat than his rival. James has completed 17 crosses so far this season; the player with the second-highest total is Ben Chilwell on five.

Azpilicueta’s leadership role may not be under threat, but his prospects of more playing time certainly are.