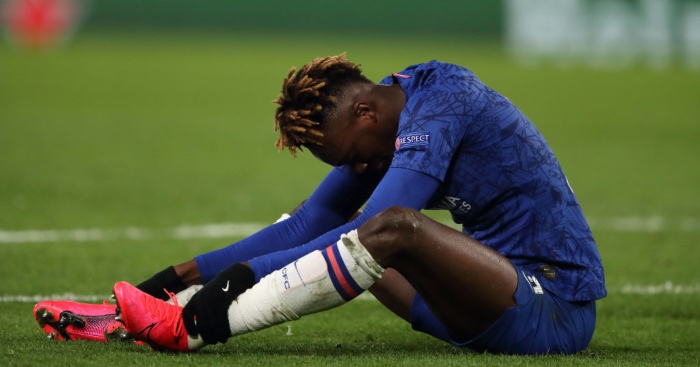 The 3-0 defeat to Bayern at Stamford Bridge was a humbling experience for Chelsea. It was a sign of the weakness of the Premier League and the huge gap Frank Lampard’s side have to bridge to compete with the very best in Europe. We’ve also picked out five Chelsea players Lampard should build his team around, but here are five who need an upgrade…

Ross Barkley
Tuesday night’s defeat was Barkley’s first Champions League start, and it could be his last. He was good against a very poor Tottenham side on Saturday, but looked utterly lost against a Bayern side with real discernible quality. Thiago and Joshua Kimmich simply waited for the ball to arrive at his feet before sweeping it from him as it bounced three yards away from his first touch, which has never been good enough.

Tammy Abraham
Abraham is a very good striker, and could become a great one, but Chelsea can’t simply wait and see if that will happen. Tiresome though Lampard’s incessant complaints over finishing are becoming, he’s got a point. The six-yard box has been a Nether Zone for Chelsea strikers ever since Didier Drogba retired, and on at least two occasions against Bayern, a cross rolled across that no-go area with Abraham putting his hands to his head as he was so close to getting on the end of it. The problem is, he’s so close far too often.

Marcos Alonso
A dreamy left foot and an eye for goal can’t make up for an extreme lack of pace – he isn’t being managed by Antonio Conte anymore. He utilised his only workable solution for stopping Robert Lewandowski, but his slap to the Polish striker’s face was punished and the Spaniard trudged from the Stamford Bridge turf after another night to forget. A left-back who can’t be trusted to play left-back is an odd situation for a left-back to find himself.

Most @premierleague goals by defenders since August 2016 (when Alonso joined Chelsea):

Kepa Arrizabalaga
Kepa’s exclusion is now far more than slap on the wrist; Lampard doesn’t fancy him. He looks pretty and rarely makes a complete howler, but has the lowest save percentage (58%) in the Premier League and made our worst XI of the season so far. Willy Caballero has filled in admirably but in reality is a poor back-up goalkeeper, let alone a number one. Reports suggest Chelsea are gunning for a Kepa swap deal with Atletico Madrid for Jan Oblak – wishful thinking.

The other centre-backs
They’re all much of a muchness. Antonio Rudiger is a fan favourite at Stamford Bridge and his return from injury was met with upturned chins, hands raised to the sky and exclaims of Hallelujah! as Chelsea’s defensive woes would be over. But it hasn’t turned out that way, the defence is the same as it was, save for a couple of unnecessary sliding challenges and the odd gut-busting call to arms from the German. Rudiger has shown – like Andreas Christensen and Kurt Zouma – that he’s just a bit better than mediocre.

This is Chelsea’s defense [Rudiger in particular] for you pic.twitter.com/LeHMjkgPUa