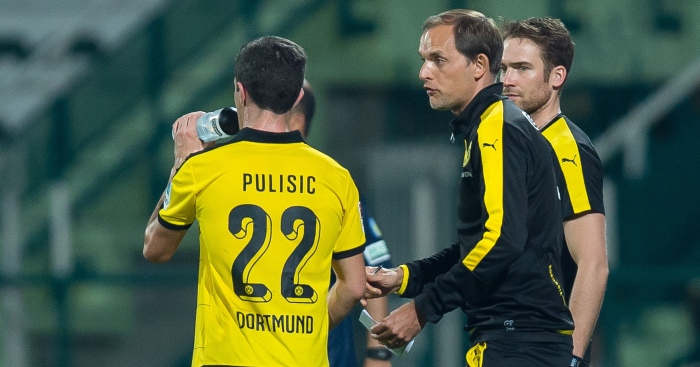 They won’t all be relishing the arrival of Thomas Tuchel, but these five should…

Christian Pulisic
“I’m just very thankful for everything he did for me. He always just trusted me and gave me a chance,” Pulisic said when Tuchel left Borussia Dortmund in 2017. “Of course he’s given me tips and feedback with what he sees every day in training and stuff like that, small things.”

The German boss handed Pulisic his professional debut as a 17-year-old in 2016 and gave the young winger ample opportunity to prove his talent, often leaving one of Pierre-Emerick Aubameyang, Marco Reus or Ousmane Dembele on the bench to get the American into his team.

Frank Lampard was also a big fan of Pulisic, hailing him as the “difference maker” when he came into the side last season and noting his “incredible gift” to beat players in tight spaces. When the winger was fit he played under Lampard, but his form has stuttered like the majority of the players in recent weeks and the “small things” Tuchel has to offer may prove to be the boost he needs to kickstart his season.

In Tuchel’s last game as Dortmund boss, Pulisic won the penalty that resulted in them winning the DFB-Pokal. Time to go again.

Timo Werner
He’s German and is therefore one of the three players that Tuchel is looking forward to working with. At this point, any way to hoodwink Werner into thinking he’s still playing in Germany is worth a shot.

He scored 0.9 goals per 90 minutes for RB Leipzig last season, compared to 0.26 for Chelsea. Part of his poor goalscoring return is no doubt due to Lampard’s bizarre insistence on playing him as a winger for much of the season. To come to a new league is difficult enough, but he appeared to be settling pretty well before his move to the left gradually sapped him of all confidence in his own ability – it’s been tough to watch.

Strikers aren’t quite cursed when they arrive at Stamford Bridge – Didier Drogba won it all and Diego Costa was also brilliant – but it’s not been a typically profitable hunting ground for many who have done great things elsewhere. We’ve seen strikers start poorly and never truly recover.

Fortunately, unlike Lampard, Tuchel has historically been willing to bend his formations – if not his possession-based attacking ethos – to suit the different qualities of his best players. Werner hasn’t shown it, but he should be one of Chelsea’s most devastating players and getting the best out of your best hope of scoring goals has got to be a priority.

Havertz’s start to life at Chelsea has been just as bleak as Werner’s, but he can add Covid-19 to the alien position caveat they share. Generally stuck on the right of a midfield three, he’s looked tidy but tied down. He was always unlikely to be granted the freedom he was at Bayer Leverkusen – where he was the man – but he’s looked like a man unable to “express himself”, despite reports suggesting that’s all the advice Lampard was able to muster.

And it doesn’t work like that: you can’t just tell players to be expressive when the tactics and formation don’t allow it. Chelsea were an exciting prospect before the season started, largely due to what many expected to be a thrilling partnership between Werner and Havertz. But other than their simple combination as Werner scored a tap-in against Morecambe in the FA Cup, it’s hard to remember a time when they’ve been anywhere near each other on the pitch.

What was the front four we expected to see for Chelsea after their summer business? Pulisic on the left, Ziyech on the right, Werner up top and Havertz in behind. How many times have we seen them start together in the Premier League? Not once.

What did we expect Chelsea’s front four to be under Lampard this season?

How many times have they played together in the Premier League?

To be fair to Lampard, they’ve all been fit on just seven occasions this season and it might not work, while Tammy Abraham and Olivier Giroud have shown their worth to the side on a number of occasions. But it’s got to be worth a go, hasn’t it?

Anyway, I digress. Havertz has more of a chance of playing in his favoured position under Tuchel, as he had next to no chance under Lampard.

Rudiger, through a Kurt Zouma hook rather than his own crook, has found himself back in the starting line-up for Chelsea’s last two Premier League games. He was fine against Fulham but bang average against Leicester. He has been cited as one of many reasons for Lampard’s demise at the club.

He’s likely to be given a chance by Tuchel, not purely because he’s German but because there’s clearly an admiration for the centre-back in Germany, built through his solid performances in the national team.

But while they’re presumably confused as to why Rudiger is not in the Chelsea side, we’re similarly perplexed that he is in Germany’s. He’s the sort of player whose reputation seems to be way above the limit of his actual footballing ability. We’ll see.

Billy Gilmour
Lampard hailed Gilmour as “incredible” in the 2-0 FA Cup win over Liverpool last season and “outstanding” in the 3-1 win over Luton on Sunday.

Thank you for giving me an opportunity and for your faith and trust in me. It’s been an honour to learn from you. 💙 pic.twitter.com/1GhQUIClLq

He gave the midfielder his first chance, but while Mason Mount and Tammy Abraham may have been afforded more opportunities than most under Lampard, Gilmour’s quality is so obvious that if anything he should have been given more of a chance. Since his Premier League debut in August 2019, Gilmour has started just 11 games in all competitions.

“If you’re good enough, you’re old enough,” Lampard said early on in his Chelsea tenure, when asked what was prompting him to put so much trust in the academy products. If he genuinely believes that then he must think Gilmour is nowhere near as good as Jorginho, who’s started 53 games in that time.

Tuchel loves players like Gilmour. At Dortmund it was typically Julian Weigl as his metronome in midfield, not just keeping them ticking – Jorginho can do that – but beating players and consistently looking for ways to affect the game. At PSG, it was Marco Verratti, who is essentially Billy Gilmour with a shaved head and a temper.