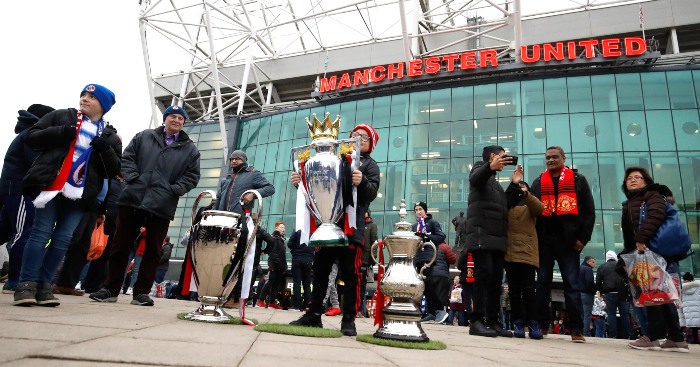 This year above all overs, the traditional, romantic “all of them” answer truly doesn’t apply. For one thing, there’s a decent argument that not only should some teams not take it seriously, but that all the teams shouldn’t be taking it at all in a congested season with a hard deadline on Covid Island with positive tests rising.

Even then, there remains an unusually valid flip of this feature about why, say, Spurs, or Leicester, should absolutely f*** the FA Cup right off at the very earliest opportunity.

Nevertheless, though, there are still teams who should definitely take the World’s Greatest Cup Competition very seriously indeed. Here are five of them.

Manchester United (v Watford, Saturday)
They’re right in a title race and looked absolutely shattered against City in the Carabao semi-final on Wednesday. And yet… you still feel like the FA Cup is important to them. They will surely make changes against Watford – Harry Maguire and Bruno Fernandes in particular definitely need a rest – but they still need to give this competition a good go. Not least because any slip-up against Watford so soon after the Carabao exit and on the back of Champions League bungling would be enormously deflating at a pivotal point of the season.

Arsenal (v Newcastle, Saturday)
Might as well, they don’t take any other competition seriously these days. Arsenal do tick a lot of boxes, though. Manager with FA Cup pedigree (manager with only FA Cup pedigree if we want to be snide about it), team and squad capable of beating the best in a one-off game but too inconsistent for a proper run at the league or even top four. You’d want an easier third-round task if you were nit-picking but that’s the only big negative against an Arsenal side who took full advantage of an unusually easy Europa League group to progress to the knockouts with minimal exertion yet now face a nasty last-32 tie that could shut down that avenue to silverware that would relieve the pressure on Arteta for at least a fortnight.

Southampton (v Shrewsbury, whenever)
Can’t lie, we’d bloody love to see Southampton win the FA Cup. Admit it, you would too. Unless you’re a Portsmouth fan or some such thing. Again, there are lots of reasons to like their chances. The third-round draw is decent, they have proven they can beat anyone up to and including the champions on their day, likeable and impressive manager who we’d all like to see achieve good things. Also went out of the Carabao at the first stage, which is sub-optimal from a ‘doing well in cup competitions’ standpoint, but does mean their workload has been lighter than most. A cup run need not derail an impressive league season that is nevertheless unlikely to deliver the top-four finish that represents the bare minimum requirement to trump a lovely shiny pot.

Leeds United (v Crawley, Sunday)
If Arsenal and Southampton tick a lot of FA Cup Run boxes, Leeds tick the lot. Mid-table with little prospect of reaching the top six or facing a proper relegation tangle? Check. Vastly experienced manager? Check. Sort of team that can’t in any way be relied on over a series of games but can absolutely do a number on anyone in a one-off clash while boasting the ability to score an absolute f***ton of goals when the mood takes them? Double-check. Sufficient squad depth to rotate without compromising quality too much? Check. Will nevertheless definitely trip over their own arseholes against League Two Crawley on Sunday? Sadly, check.

Whoever wins out of Wolves and Palace (Friday)
Let us have this one fudge. Both on 22 points, both pretty much certain to be Premier League teams next season, neither going to bother the top six this time around, both have players and systems that can trouble the best on a given day. Wolves aren’t exactly in an existential crisis, but in their third season back in the Premier League there is a vague sense of wondering what the actual goal of it all is. They’ve changed tack from the methods that delivered successive seventh-placed finishes and, while it’s not exactly failed, nor as it led to any really noticeable improvement. A good go at the FA Cup would offer something even if they ultimately came up short. For Palace, winning the FA Cup would exorcise the ghosts of the Pardew Shuffle. We can all get behind that.