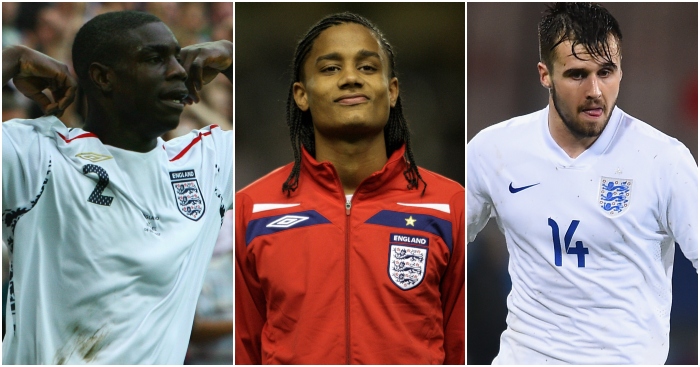 Theo Walcott
Walcott, like Hudson-Odoi, had not one single Premier League start under his belt when he was called up for the 2006 World Cup. In fact, Theo had not played a single minute in the top flight when Sven Goran Eriksson decided to take him to Germany for the ride.

“I took my driving theory test, finished at 3pm and rang my Dad. He said I was in the England squad and I didn’t believe it,” Walcott said. “I thought he was having me on.”

We presumed Sven was having us all on. The England boss admitted it was a gamble: “Probably it is not logical,” he said while questions were quite rightly asked of the decision to include the rookie among only four strikers, two of whom – Michael Owen and Wayne Rooney – were struggling with injury.

Despite all the fitness concerns, Walcott never got off the bench while England suffered their customary quarter-final heartbreak.

Carl Jenkinson
On the night Zlatan Ibrahimovic’s ridiculous overhead kick upstaged Steven Gerrard’s 100th cap, Jenkinson made his only England appearance. It came after only 13 Premier League starts with Arsenal.

Politics perhaps played a part in Roy Hodgson’s promotion of the right-back, who had previously played for Finland Under-21s. To take him to Stockholm, the Three Lions required FIFA clearance and in hindsight, it seems his solitary substitute appearance was a gesture in return for Jenkinson pledging his allegiance.

The Arsenal defender need not have bothered. He never made another squad and has made only 23 Premier League appearances for Arsenal in the five years since his England cap.

Micah Richards
The Manchester City starlet became England’s youngest-ever defender when at 18 years old he made his international debut against Holland after 23 Premier League starts.

Steve McClaren hailed Richards as “the new breed of player”. The new England boss said: “He is big, strong, athletic, very quick and has got a fantastic leap on him.”

Eight years later, having been spat out by City and England, Richards admitted those physical qualities carried him through his brief 13-cap international career. “Positionally, I wasn’t good enough,” he said while trying to rebuild his career at Fiorentina in 2014. “Technically, I was not international standard. I was using my pace and power to get me out of trouble.”

Reminder that Micah Richards has 13(!) England caps and is still only 30(!!) but hasn't played a single minute of competitive football since lasting just over an hour against Wolves in October… 2016.

Michael Mancienne
‘On loan from Chelsea, Mancienne, 20, struggled at times to deal with Southampton’s lively attackers, even when they were reduced to 10 men after the dismissal of Jason Euell.’

That was The Telegraph match report from a Wolves win in November 2008 over a ten-man Southampton side which featured David McGoldrick, Oscar Gobern and Bradley Wright-Phillips in its attack. Later that evening, Mancienne was called up by Fabio Capello for England’s clash with Germany in Berlin.

“I want to know him better,” said Capello of the call-up, which came from left field, despite only Fabrice Muamba having more Under-21 caps without making a senior appearance. Evidently, the England boss wasn’t that impressed. Mancienne never made another senior squad and managed only four Premier League appearances for Chelsea, by which time his career descent had already begun. The 31-year-old is now playing for New England Revolution in MLS.

A gaggle of back-up goalkeepers
Joe Lewis hadn’t played above League Two when the 20-year-old Peterborough stopper was called up by Fabio Capello in May 2008. He never earned a senior cap but at least he went on to play in the Premier League. Once.

That’s once more than Frankie Fielding, who also went from League Two – on loan at Rochdale from Blackburn – to the senior England squad in August 2010. For the friendly against Hungary in 2010, on his bench, Capello had Fielding and Watford’s Scott Loach, who was also yet to play a top-flight match.

Compared to Lewis and Fielding, David Stockdale was comparatively a veteran with his seven Premier League appearances when Capello called for the 24-year-old Fulham keeper in February 2011. The then-24-year-old had to pull out of the squad for a Euro 2014 qualifier that summer because it clashed with his wedding. Stockdale was around Capello’s squad for six games that season while on loan at Ipswich.

Obviously things have improved since then. Or so we thought until we remembered that Gareth Southgate called up Marcus Bettinelli in September after just two Premier League games in which he had conceded four goals.