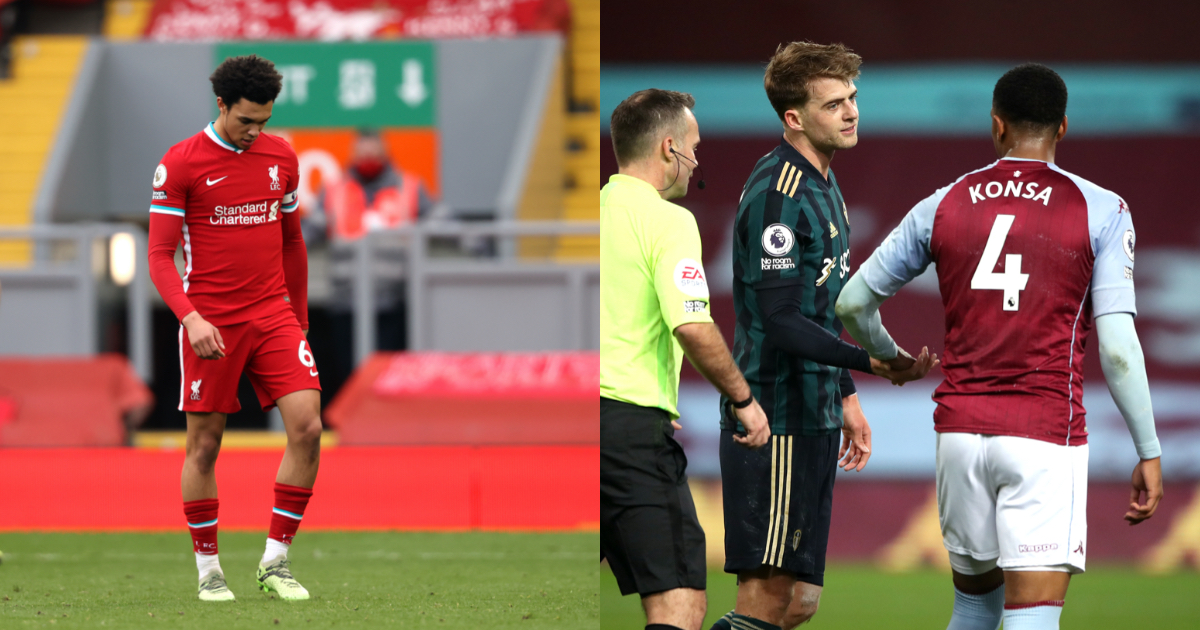 We were among the few not appalled by Alexander-Arnold’s exclusion. These five have more of right to bemusement…

Thursday was a weird day in the Football365 basement, from Manchester United fans’ inexplicable irritation at an article praising Thomas Tuchel in the morning, to the weird furore surrounding Trent Alexander-Arnold’s exclusion from the England squad in the afternoon. Our bafflement at the response to Chelsea’s quite brilliant win against Atletico Madrid turned to seemingly everyone else’s as Gareth Southgate dared to select three right-backs who have performed very well in an England shirt over another who’s been a bit sh*t.

Liverpool are as ‘shocked and bemused’ as anyone, presumably joining the rest of the Twitter echo chamber in dismissing the tragic performances Alexander-Arnold produced before the slight upswing in the last month or so. Yes, playing for Liverpool last season he was undoubtedly the best English right-back – he may even have been the best right-back in Europe – but he has never replicated that form for England and has got nowhere near those levels this season.

His exclusion was nothing seismic. These five however, have a genuine cause for confusion.

Wonderful as it would have been to see the absolute implosion of Liverpool fans had Ayling been selected over their Merseyside deity, that would have been a genuine shock. But Bamford’s inclusion would have been just reward for a quite incredible season. Other than perhaps Marcelo Bielsa and Bamford himself, no-one – least of all Leeds fans who watched him spurn opportunities in the Championship last season – would have expected 13 goals and six assists from 28 Premier League games.

As evidenced by his charming breathlessness in his now frequent post-match interviews, Bamford works extraordinarily hard for his team: initiating the press; tracking back; tirelessly running off the ball. But those non-negotiables have been allied with a far greater potency and a stunning variety of goals this season. He’s been technically brilliant.

His problem is Ollie Watkins, whose place is also very well deserved.

Michael Keane
Alexander-Arnold’s exclusion is nowhere near as bonkers as Eric Dier’s inclusion. His return to the squad for the Nations League games at the start of the season was understandable given his reinstatement in the Tottenham team by Jose Mourinho, but he’s not featured in Spurs’ last four Premier League games and is quite simply not as good a defender as the three options ignored by Southgate on this list.

For a manager who’s very keen to point to form as the reason a player is or isn’t selected, it’s hard to put his preference for Dier down to anything other than some sort of weird 2018 World Cup nepotism.

It’s not like there are no other options. “Michael this season is really good, really consistent, he never made a mistake,” Carlo Ancelotti recently said of Michael Keane. And Carlo knows a good centre-back when he sees one, with Paulo Maldini, Alessandro Nesta, John Terry, Ricardo Carvalho, Thiago Silva, Sergio Ramos and Kalidou Koulibaly among those he’s worked with.

Ben Godfrey
“If Gareth is watching Ben Godfrey then he is right,” Ancelotti also said last month. “Gareth doesn’t need advice from me but to see and watch Ben Godfrey at this moment, in this period, is a pleasure for any manager. He has surprised me because I didn’t know him so well [when he signed]. He was a signing from the club, from our scouts, and he has been really good. He has been able to adapt very quickly to different positions.”

He’s surprised us as much as Ancelotti. It’s difficult to gauge just how good a player is in a bit of a rotten team, but £25million seemed like a lot when he signed from Norwich in the summer. But he’s an incredibly versatile, skilful, massive, wonderfully angry young man, seemingly completely immune to pressure such is the confidence in his own ability.

His time will come for England.

Ezri Konsa
Southgate was absolutely right to select an Aston Villa centre-back. They’ve got the third best defensive record in the Premier League and the pairing of Tyrone Mings and Ezri Konsa, in front of the outstanding Emiliano Martinez, have been a big reason why Dean Smith’s side still have an outside chance of European qualification.

But why Mings over Konsa? The former’s inclusion in previous squads can’t have hurt, nor can his height and superior physicality. But as a footballer, with the ball on the ground under a manager who wants to build from the back and break the press, Konsa – who has a pass percentage of 84.1% to Mings’ 77.4% – makes far more sense.

But then Mings being left-footed is a big advantage, particularly if Southgate continues to play three at the back. It shouldn’t be a case of one or the other Villan anyway; they both deserve a shot. Which again brings us back to the same question: what the f*** is Eric Dier doing there?

Aaron Cresswell
Ben Chilwell might feel a bit fortunate to be included. The arrival of Tuchel at Chelsea has seen him rotated with Marcos Alonso, with the Spaniard the preferred option at left wing-back in the big games. Opportunities he has been given have hardly been grasped with both hands – he was poor in the 0-0 draw with Leeds, for example.

Having been pretty much the only left-back option for Southgate at the start of this season, he is very much behind Luke Shaw in the pecking order and perhaps should have had his place taken by Aaron Cresswell.

Premier League defenders who’ve created more clear-cut chances than Trent this season: 2
Number of them in the England squad: 0 https://t.co/vS4cW9xyad

It’s not entirely clear whether Cresswell is only able to play good football under David Moyes, but his seven assists are the most of any defender in the Premier League and his left foot delivery from set pieces is the best around right now. Comfortable on the left of a back three or back four, his versatility could and perhaps should have put him above Chilwell in the reckoning.