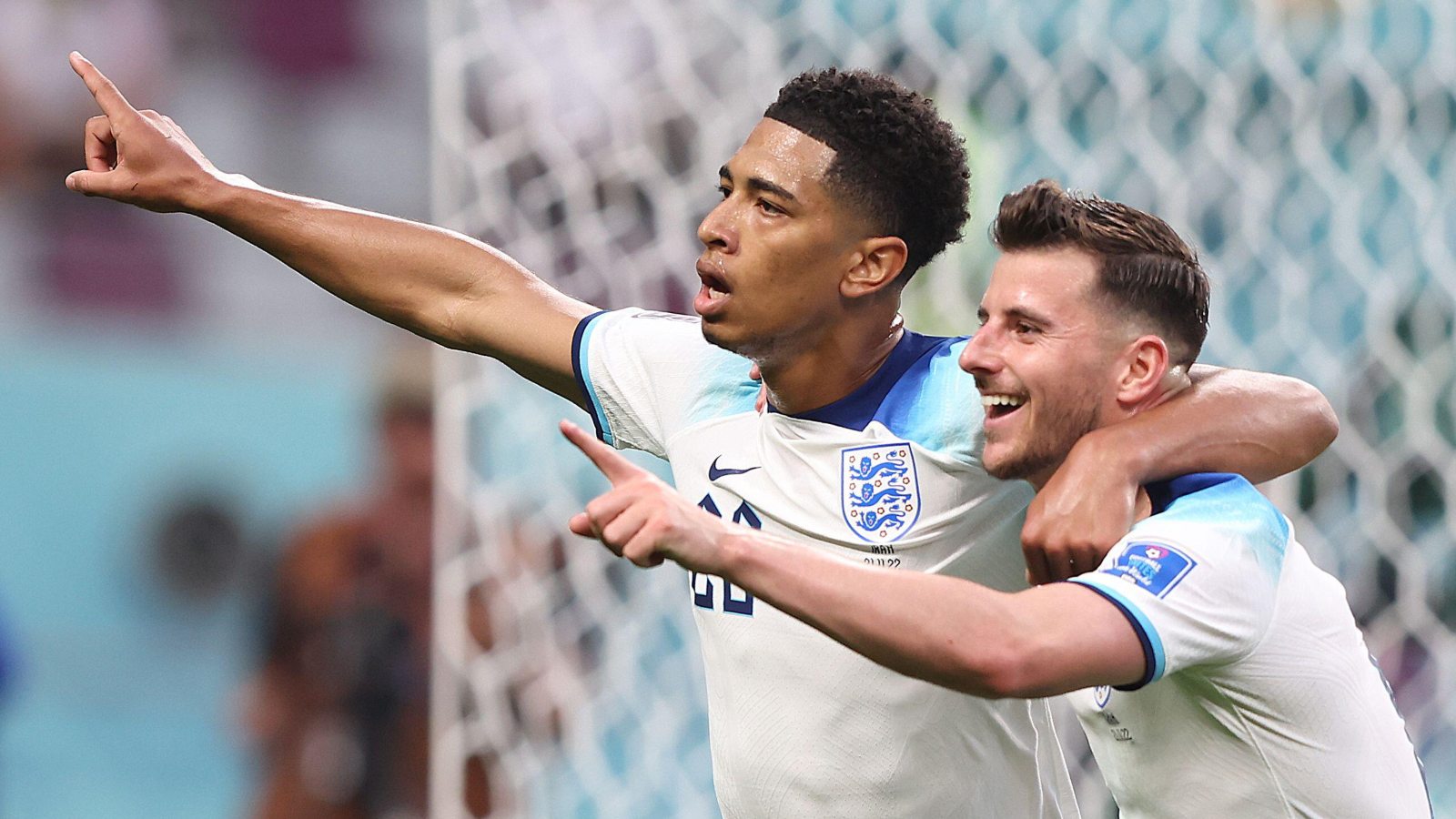 Jude Bellingham was brilliant against Iran in England’s World Cup opener, scoring the first goal and being heavily involved in the third.

Even Raheem Sterling thrilled in a tournament opener as an England novice.

Eric Dier
The third greatest thing Eric Dier ever achieved in an England shirt, behind the Colombia penalty and that Ramos reducer, was at Euro 2016. Wayne Rooney, Harry Kane and even Kyle Walker were lurking when Dele Alli was fouled around 20 yards out as Russia were holding out against Roy Hodgson’s side in France. Dier, who had never attempted a single shot from a direct free-kick during his time at Tottenham, stepped up and curled an effort past Igor Akinfeev.

It capped an excellent performance from the midfielder (yes, midfielder), who shielded the back line impeccably and held for the more attacking players to push forward in his first competitive international. The clamour for Jack Wilshere to start was thoroughly silenced by the 22-year-old.

Raheem Sterling
We do not live in a fact-based era so Raheem Sterling scored against Italy to launch England’s successful 2014 World Cup campaign and that’s that.

Barely three minutes had passed by the point a teenage Sterling picked up the ball on the halfway line, drifted past Gabriel Paletta and slammed a wonderful effort into Salvatore Sirigu’s side-netting. It nestled in such a way as to give the illusion of a quite glorious goal as thousands of pints were presumably expelled into the air at the sight of an off-target shot.

Italy would win the group opener 2-1, a Daniel Sturridge effort sandwiched between goals from Claudio Marchisio and Mario Balotelli. But Sterling announced himself on the world stage with an excellent individual performance full of bright, incisive dribbling that had the Azzurri panicked. The Liverpool forward thrilled on his third England start and first competitive international of any kind.

Ledley King
While Euro 2004 belonged to Wayne Rooney it was Ledley King who made the biggest early impact of England’s novices in Portugal. There were doubts as to whether the Tottenham centre-half would even play after Sven-Goran Eriksson named a 23-man squad that featured John Terry, Sol Campbell and Jamie Carragher in the absence of a suspended Rio Ferdinand. But with Terry injured, King was trusted over Liverpool defender Carragher.

The 23-year-old was close to the peak of his club powers at Tottenham without ever establishing himself in the England squad. Three of King’s first five caps were as one of a glut of half-time substitutes, another was a two-minute cameo in a Euro 2004 build-up friendly and only once had he started an international game before the tournament: a 1-1 draw with Portugal that February.

Thrown in at the deep end against a France side that capitulated in Japan and South Korea two years before but had dominated the global scene immediately before then, King thrived. Thierry Henry, David Trezeguet and Robert Pires were kept completely at bay and it was only a last-gasp Zinedine Zidane free-kick and penalty double that undid an otherwise stoic defence. The undercapped King’s next start at a major international tournament obviously came against the United States at the 2010 World Cup.

Darius Vassell
With Michael Owen, Emile Heskey, Robbie Fowler and Teddy Sheringham all entrenched in the England selection pool for at least a couple of years before the 2002 World Cup, there was one spot left for a striker in Eriksson’s squad. Andy Cole scored 13 Premier League goals for Blackburn that season but immediately retired upon being overlooked yet again. Michael Ricketts, James Beattie and Jermain Defoe all made strong cases, as did Kevin Phillips.

Matt Jansen was called up for a preparatory friendly, had his competition suit measured and was invited to David Beckham’s send-off party, only for Darius Vassell to get the call. The 21-year-old had 12 goals in 36 games for Aston Villa that season but it was a choice that left many underwhelmed.

Vassell had, of course, played all five of England’s games in the lead-up to the tournament and even scored three times. Starting the opener against Sweden on the left-wing was still a curveball, albeit one he dealt with impeccably.

Henry Winter described his 74th-minute removal for Joe Cole as ‘inexplicable’ as Vassell ‘was shining far more than Michael Owen’ in a display that was ‘full of running, touch and self-belief’. His last action before being replaced was to break the last line of the Sweden defence and earn Andreas Jakobsson a booking for pulling back England’s most effective forward of the game.

Paul Scholes
Des Lynam‘s amiable attempts at shaming an entire work-shy population bristling in anticipation at the prospect of England’s Le Tournoi heroes rocking up at the Stade Velodrome in June 1998 was a distant memory by the time Paul Scholes finally sealed a tournament-opening win against Tunisia. Alan Shearer had struck first on the stroke of half-time but England laboured through the closing stages against Hatem Trabelsi and friends until Scholes curled a delightful effort into the far corner with a minute remaining.

“Young Paul Scholes is showing a lot of maturity,” said manager Glenn Hoddle. “He’s got good talent and today he felt at home out there. I looked at a young man playing his natural game under those circumstances and that’s good to see.”

The 23-year-old was a four-season veteran at Manchester United boasting two Premier League winner’s medals, a Champions League regular excelling in midfield under Alex Ferguson. But the Tunisia game was only his eighth England cap as Hoddle sought to ease him in. Should have blooded him sooner and stuck him on the left wing.