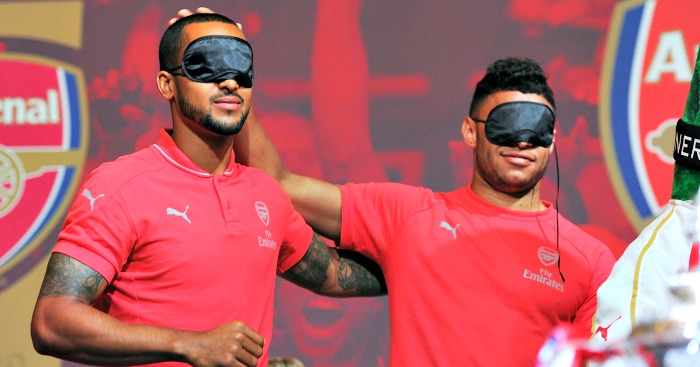 Theo Walcott
The perfect embodiment of modern-day Arsenal. Theo Walcott is in the midst of his 11th season as a professional footballer, yet his best position on the pitch is yet to be discovered. He turns 27 in just over a fortnight. He had 17 touches against Manchester United on Sunday; his replacement Olivier Giroud had 15. Walcott made nine passes; Giroud made 14 in his 27 minutes to Walcott’s 63. Only Mesut Ozil and Alexis Sanchez are paid more at Arsenal. The roll of dishonour is endless.

Walcott has designs on playing as a central striker. He has reached double figures for goals in just one of his ten full Premier League seasons. He has scored fewer goals this season than Christian Benteke, Bafetimbi Gomis and Aleksandar Mitrovic. And Scott Dann. He has scored the same number of goals as Diumerci Mbokani, Rudy Gestede, Wilfried Bony and Steven Fletcher, having featured considerably more often. He has scored three goals in nine starts as a central striker; Giroud has 13 in 25. He has six goals in 30 appearances in all competitions this season, a tally he reached in 18 games in 2013/14, and one he bettered in 21 games in 2014/15. Only his first four campaigns as a Gunner yielded a better goals-per-game ratio than this season. Yet he is the starting striker for a team with Premier League title aspirations. How?

Jordan Henderson
For ‘Theo Walcott’ read ‘Jordan Henderson’, and for ‘Arsenal’ read ‘Liverpool’. Henderson personifies all that is wrong with this current Liverpool side. He is the 7/10 player leading a 9/10 club.

Henderson has made 151 Premier League appearances for Liverpool. Some notable moments aside, his progression has been negligible. Only two current players, Lucas Leiva and Martin Skrtel, have more appearances for the club, and Jon Flanagan is the only other player to have featured in the first team prior to the Henderson era. He is one of the Reds’ most experienced players, but an on-pitch leader in name only.

“I’m just very proud of all of my team-mates and I feel as though they will learn from this experience. We left everything out on the field, and that’s all you can ask,” said captain Henderson after Liverpool’s Wembley heartbreak in the Capital One Cup final on Sunday. The 25-year-old had 107 touches in that game, the most of any player. It talks like a Steven Gerrard, it attempts to play like a Steven Gerrard, but it ain’t no Steven Gerrard.

“Arguably, the way he is looking, he could be our best ever player.”

The famous words from Alex Ferguson have been a weight around the neck of Phil Jones since they were uttered in 2013. No wonder he pulls those bloody silly faces.

Injury problems and managers insistent on utilising him in a number of different positions have played a part in Jones’ lack of progression since joining United from Blackburn in 2011. Whether Louis van Gaal, Jose Mourinho, Ryan Giggs or A.N Other ascends to the Old Trafford throne in the summer, it’s difficult to envisage a scenario whereby the 24-year-old is a first-team regular. Signed one year after Chris Smalling, Jones was always considered the superior prospect of the two. But Smalling has since become the club’s most accomplished defender, while Jones is behind midfielder Daley Blind in the central defensive pecking order. Not quite the next Duncan Edwards.

Alex Oxlade-Chamberlain
‘Four years after joining Arsenal, we’re still waiting for Alex Oxlade-Chamberlain’s breakthrough moment. He needs starts, and fast…’ was the assessment from Daniel Storey in October. The England international had no goals or assists in just 254 minutes of Premier League football. Fourteen games and 667 minutes later, he has one goal; the assists tally remains untouched. As a result, the 22-year-old has contributed directly to a goal just twice in his last 39 league games. Joel Campbell has surpassed him in terms of squad placing, and Alex Iwobi could soon follow. It is no wonder the club are reportedly willing to listen to offers in the summer. If Walcott is frustrating for Arsenal fans, Oxlade-Chamberlain’s stagnation must be unbearably disappointing.

November 17, 2011: Jeremy Wilson writes how Rodwell had “come of age” on his England debut.

The subsequent story is oft-told. Rodwell joined Manchester City for £12million in August 2012. The fee could rise to £15million, reports said. Suffice to say it did not. The midfielder made 25 appearances in two injury-riddled seasons, and now finds himself at relegation-embattled Sunderland. Once England’s Next Big Thing, the man who turns 25 in under a fortnight has started just five Premier League games for a Sam Allardyce side this season. Time to hit the road, Jack.