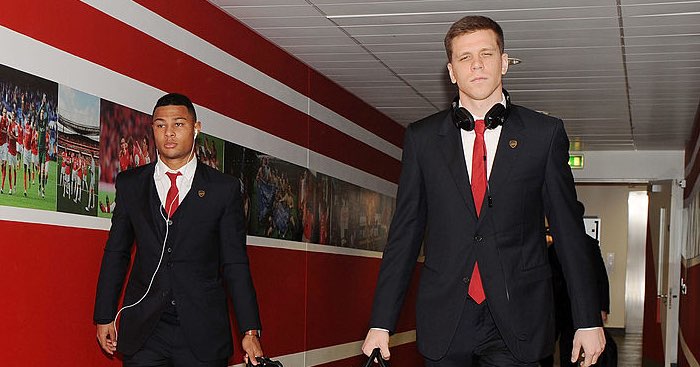 We’re not talking about the players they were forced to sell, but those they chose…

Serge Gnabry
Four Serge Gnabry goals in Bayern Munich’s 7-2 thrashing of the old enemy in the Champions League provided Arsenal fans with infinitely more joy than the German provided in his five-year spell at The Emirates. And if that didn’t do it for them, his post-match trolling of Spurs certainly did the trick.

The winger joined the Gunners as a promising 15-year-old from Stuttgart in 2011, but made just ten Premier League appearances before being shipped out to West Brom on loan. It’s perhaps unsurprising he didn’t flourish at The Hawthorns under the tutelage of Tony Pulis; he’s not 6ft 2ins or a centre-back after all…

Arsene Wenger was still keen on keeping the then 21-year-old who he described as having “a lot in the locker”, but Gnabry insisted on a permanent move to Germany in search of a new lease of life and more time on the pitch.

And “knock me over with a feather”, he’s done pretty well since. From Werder Bremen to Bayern Munich – via Hoffenheim – Gnabry has scored 32 Bundesliga goals in just over three seasons and is now a regular in the German national team. The Arsenal fans may have gone to sleep happy – with ‘one of their own’ destroying Spurs on the world stage – but will have woken up frustrated at their club’s lack of patience in nurturing such an obvious talent.

As Matt Stead pointed out, Bayern have made it their duty to help Gnabry help them instead of expecting someone else to put in the hard yards first.

Gabriel Paulista
A fiery, committed centre-back, good on the ball and – according to his Valencia manager – “a calming influence on the pitch and in the dressing room”.

The sort of defender Arsenal are now crying out for but not how Gabriel Paulista is remembered during his Emirates stint. Like almost every other centre-back of the last five years, Gabriel was roundly criticised for his performances for the Gunners. Labelled a “hot-head” by Arsene Wenger after a bust-up with professional wind-up merchant Diego Costa, the Brazilian was second or third choice for much of his time in north London, before making his £10million switch to Valencia.

Gabriel has flourished at the Mestalla and was key to Valencia’s Copa Del Rey final victory over Barcelona last season as well as topping the whole of La Liga for interceptions. The centre-back believes he “deserved more opportunities” to prove himself in the Premier League, and his form for Valencia, including his virtuoso performance in their 1-0 win over Chelsea in their Champions League opener, suggests he might be right.

Wojciech Szczesny
To not just slip into the gloves of, but forcibly remove them from, arguably the greatest goalkeeper of all time is no mean feat (hands? Sorry). The former ‘best’, Gianluigi Buffon, is watching Wojciech Szczesny from the Juventus bench this season, much like current ‘best’ Alisson Becker did from the Roma sidelines two seasons ago.

Wojciech Szczesny that is world class! Take a bow! 🙌 pic.twitter.com/UzOCq1uGVs

Szczesny points to a lack of coaching at Arsenal as the reason behind his mixed displays. He said: “I couldn’t say from a technical standpoint that I improved in any way from when I became first-choice at Arsenal until the day I left for Roma.” The Polish keeper recalls advice he received ahead of a crunch match against Chelsea: “When Hazard takes his penalties, he will shoot at the opposite side of where you will dive. So they told me it doesn’t matter which way you go.” Szczesny added: “It was laughable at times.”

He was replaced as number one at Arsenal by an ageing Petr Cech in 2015 and will not be regretting his decision to up sticks for Serie A, with two league titles and an Italian Cup now to his name.

Carlos Vela
Expectations were high when Carlos Vela arrived in north London in 2008; World Soccer magazine had ranked him among the world’s most exciting teenagers.

Those expectations reached fever pitch as Vela scored a hat-trick on his first start for Arsenal in September 2008 as the Gunners’ youngest ever side thrashed Sheffield United 6-0 in the League Cup. But his love affair with the Arsenal faithful didn’t last long.

Brought in so soon after the Thierry Henry, Dennis Bergkamp era, he had impossibly heady heights to reach and grew frustrated at his limited Premier League action, moving to Real Sociedad in 2011. Vela was directly involved in 109 goals in 219 La Liga appearances for the Basque club and now plies his trade in the MLS, scoring 31 goals and providing 10 assists in his latest season for Los Angeles FC.

Lassana Diarra
Lassana Diarra is one of the great mysteries of modern-day football. Now retired, the Frenchman can name Chelsea, Real Madrid and PSG among his former employers, as well as Anzhi Makhachkala, Portsmouth and Al-Jazira…

Lassana Diarra trying to speak English is too funny. pic.twitter.com/fIevl5fJTQ

Touted as Claude Makelele Mark II when he arrived at Stamford Bridge in 2005 – purely because of his nationality and a vague similarity in appearance – Diarra soon moved across London for Arsenal in search of more first-team action. He didn’t get it.

Just seven appearances in five months and Diarra sulked his way out of the Emirates, as he had done at Stamford Bridge to secure the move in the first place, claiming Arsene Wenger “had taught him nothing”. Flashes of brilliance in an elongated head-scratcher of a career hint at untapped genius, but maybe Arsenal were right to let this one fly the nest.