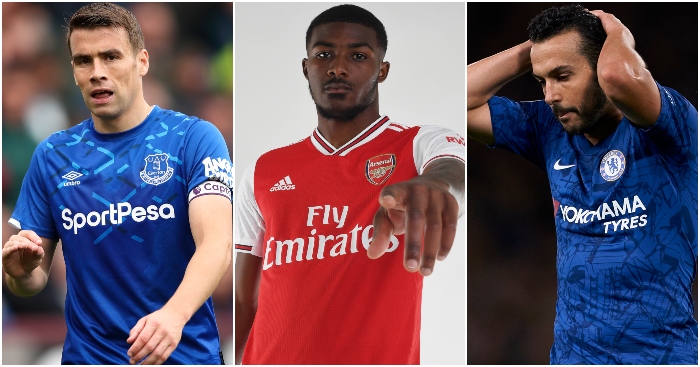 Angus Gunn (Southampton)
“I am in the good position that I have two goalkeepers that are on the same level,” said Ralph Hasenhuttl back in October, omitting to clarify the exact level.

Gunn has had the gloves since February but the former England Under-21 keeper can’t say he wasn’t warned about his form. He may have been made the fall guy for Southampton’s 9-0 home humping at the hands of Leicester but Gunn had put in a few ropey performances prior to that embarrassment. “I think the last games from Angus haven’t been the best so far,” said Hasenhuttl, unaware that the worst was yet to come.

Alex McCarthy was reinstated as No.1 after Gunn shipped 19 goals in his last five first-team appearances and though Saints have tightened up, they haven’t kept a clean sheet since mid-September. At Newcastle on Sunday, McCarthy was culpable for the hosts’ late winner when he failed to deal with Sean Longstaff’s long-range effort, allowing Federico Fernandez to gobble up the rebound.

Pedro (Chelsea)
The World Cup winner started the first two Premier League matches of Frank Lampard’s Chelsea reign and he would have started the third at Norwich had he not pulled up in the warm-up at Chelsea with a hamstring injury.

That was Chelsea’s first win under Lampard and the new Blues boss has barely bothered with Pedro since. The 32-year-old has started twice in the league before being hooked on 63 minutes in both the win over Brighton and defeat to West Ham.

“It is a difficult time,” admitted Pedro last week. “For us, it has been a transition season because ​Chelsea has not been able to make signings and has opted for young people, but at the level required. Lampard is betting on them, and perhaps that is the reason that I’ve had fewer opportunities, despite starting well.”

The former Barcelona winger isn’t overly concerned since he can choose his next club when his contract expires at the end of the season. That’s providing Chelsea don’t sell him in January first, with Villa one of the interested parties. “Yes, there are offers,” he said. “There are always clubs that are interested, and that is a joy.”

Ainsley Maitland-Niles (Arsenal)
The Arsenal academy graduate started the season as Unai Emery’s first-choice right-back, getting five games under his belt before being sent off in the sixth. He hasn’t been seen in the Premier League since.

Maitland-Niles’ performances were used as one of the sticks with which to beat Emery, but the Arsenal youngster has been at pains to make clear that he is not a right-back: “I’m not a defender,” he said back in September. “So I do get a lot of stick about my defending being poor, but it’s something I’m learning and have been learning for a couple of years now.

“It’s not going to come overnight. If I was a defender as a kid, and my defending was poor, I would understand where the criticism is coming from, but I’m trying my best for the team and for the manager.

“It’s not where I would choose to put myself in the team, as I’m an attacking player by trade. That’s all I can try to bring to the team. I’m still learning the defensive side, so when players are running at me, and they’re throwing skills at me, I’m still learning how to deal with that.”

Maitland-Niles’ plea for mercy was heard, with Calum Chambers played at right-back before Hector Bellerin’s return. But neither Emery nor Freddie Ljungberg has seen fit to play Maitland-Niles in his preferred position. Indeed, he has made the bench only once in the last seven Premier League matches.

Has Maitland-Niles gotten a game at RB since this? He's super error prone but he's better than Bellerin/Chambers at this moment in time. https://t.co/lJp90l86JE

Shane Duffy (Brighton)
Duffy started the season alongside Lewis Dunk because Graham Potter was never likely to come in and immediately tear apart one of the few good things about Brighton last season. But three games was all it took for the new manager to get his new defender in the side at the expense of Duffy.

As an £18million new recruit, Adam Webster was never likely to sit on the bench for long and his form since being chosen to make his Premier League debut at Manchester City in August has been good enough for the former Bristol City centre-back to keep his place.

Potter wants Brighton to play out from the back, which is an approach that suits Webster more than Duffym who is more adept at the dirty work that comes with being a Premier League centre-back. Potter seems to be banking on Webster improving his defending quicker than Duffy, 28 on New Year’s Day, can transform himself into Franz Beckenbauer. When Ben White returns from his loan at Leeds, Duffy has an even bigger fight on his hands for a first-team place.

Seamus Coleman (Everton)
The Republic of Ireland right-back started the first eight games of Everton’s Premier League season, captaining the Toffees for seven of them, while summer signing Djibril Sidibe watched on from the bench. But a red card for Coleman at Burnley has led to the 31-year-old swapping roles with Sidibe, who has started the eight league matches since.

The only chance Coleman has had to stake his claim came in the 2-0 home defeat to Norwich, when Marco Silva swapped his right-backs for the final 25 minutes and though he brought some tempo and drive to the flank, Sidibe was back for the trip to Leicester when he contributed one of three assists since becoming a regular.

But Marco Silva still recognised Coleman’s determination to win back his place and his leadership qualities: “He’s everything we want and what a manager wants to see in his players,” said Silva. “He is captain and a fantastic example for everyone.” Just from the bench.