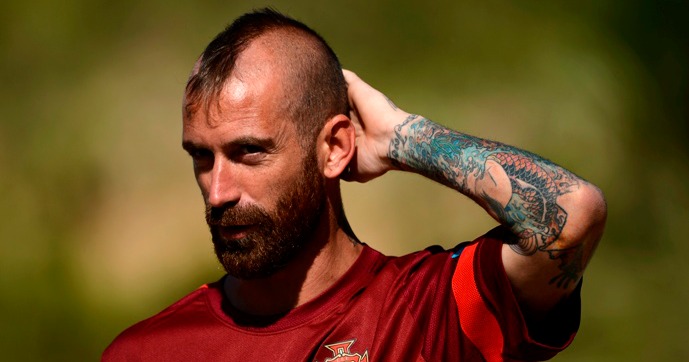 Mathieu Flamini (for Swansea?)
Flamini still has plenty on his plate, tasked with saving the world through his biotech company, but the former Arsenal midfielder is not prepared to give up on football just yet. “Business is something I developed on the side of football and will probably be in my life after football,” Flamini said in May. “But today I am a football player and I dream about football and I eat football every day.” So that’s what that weird bulge is on your tummy.

Flamini has actually been linked with a surprise move to Leeds, but he could surely do a 20-game season for a lower-middling Premier League team. With Swansea missing out on Joe Allen, Flamini might be the perfect back-up to Jack Cork, Leroy Fer and Ki-Sung Yeung. What a heavenly thing to be.

Emmanuel Adebayor (for Hull?)
At some point Premier League managers will give up on Emmanuel ‘he guarantees you goals’ Adebayor, but it doesn’t feel they’ve quite made that step yet. ‘Emmanuel Adebayor is perfect short term signing for Crystal Palace,’ the Daily Mirror’s John Cross tweeted in February. ‘When focused and motivated, he can be fantastic.’ That’s the bloody spirit.

Adebayor was the first Palace striker to score from open play in the league season, but was largely rotten. He might well be rotten at his next club too, but surely he could still do better than Cagliari, who have been mentioned most recently? We’re looking at you, Hull. Keep this six-goals-a-season-but-he’s-still-got-it dream alive.

Kevin-Prince Boateng (for Crystal Palace?)
This summer, Boateng should have been swatting away job offers from across Europe. He’s still not 30, he’s an international with experience in three of Europe’s big four leagues and he’s versatile enough to be used as a box-to-box, central or attacking midfielder, also capable of playing out wide. He sounds like he’s right up Alan Pardew’s street, so to speak.

Instead, Boateng has spent the summer getting married, enjoying a dance battle with his father at the wedding and paying opera great Andrea Bocelli €100,000 to sing to the happy couple. All very lovely and important, but now it’s time to think about your future.

The problem is that KPB is becoming a footballer in name alone. Having initially impressed at Schalke after moving from Milan, the midfielder started only 11 league games in 2014/15 before being suspended by the club last year after poor behaviour. Back at Milan, he started only one Serie A match last season. Those spells at Portsmouth and Tottenham seem a long, long time ago.

Raul Meireles (for Bournemouth?)
The coolest of all the foreign players to grace these shores, Meireles was actually reported to be joining Bournemouth in June, with the Daily Express reporting that a meeting was to happen with a deal in place. Can a man be so trendy that over a month counts as fashionably late?

Meireles joined Fenerbahce in 2012 after spells at Chelsea and Liverpool, and has been in Istanbul ever since. Having turned 33 in March his career his obviously winding down, but a man with 76 caps for Portugal could surely still do more than half a job as a Premier League squad player? This is a midfielder who played Champions League and Europa League football last season. Did you?

Alvaro Arbeloa (for Sunderland? Or Newcastle?)
I’ll level with you: I’d missed the fact that Arbeloa had been released by Real Madrid. I know, it’s a f**king scandal, lazy journalism of the highest order. I’ve taken myself outside to thrash myself and then come back in again after enjoying it a little bit too much.

Still, the result is that Arbeloa is without a club at the age of 33, and has Premier League experience from three years at Liverpool. If you can think of a panic free transfer that makes more sense than the defensively light Sunderland covering for the loss of Deandre Yedlin by signing Arbeloa than I’d like to hear it (NB: I wouldn’t really like to hear it, but fire away). He played in the Madrid derby last season, for goodness sake.

There were rumours that Arbeloa could link up again with Rafael Benitez at Newcastle, but I’m ignoring that. Try just down the A19, pal.