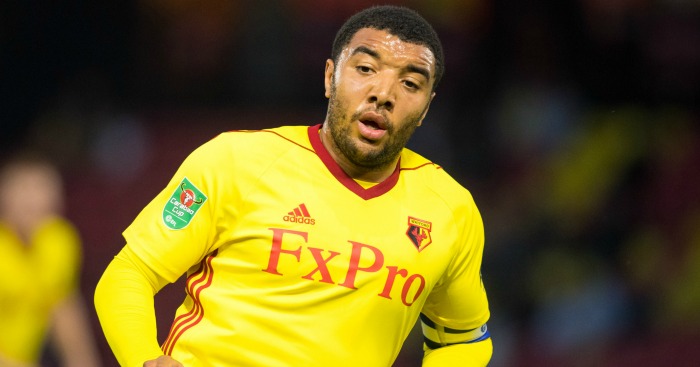 This way for those who made good impressions…

TROY DEENEY (Watford)
“I always enjoy watching Troy Deeney, he’s a proper leader on and off the field. I read that they might not give Deeney the captaincy and for me he’s kept the club together. If they left him out they’d really struggle and I don’t think they’ve bought well,” said Paul Merson ahead of a season in which he predicted Watford’s relegation. Well, Deeney did not play a single minute in the Hornets’ first two unbeaten Premier League games so the big man started against Bristol City on Tuesday night. The local paper said he was ‘back from injury and did look off the pace’. We suspect that Watford will keep on keeping on without their captain for now…

I know he is only just back from injury, but Deeney was shocking last night.

WILL HUGHES (Watford)
“Will Hughes looked a decent player and he was doing well in the Championship but it is a different challenge entirely stepping up to the Premier League,” continued Paul Merson in that damning preview, and boss Marco Silva has been slow to integrate his £8m man Hughes, giving him no more than a place on the bench in their opening two games. So he started against Bristol City, Watford lost 3-2 and the Hertfordshire Mercury described his performance thus: ‘Would have been desperate to impress on his debut. Endured a frustrating time of it on the whole, apart from a smart assist for the first goal. Was slightly slow on the ball all night though and his little flicks and passes rarely came off.’ The boss admitted: “He needs to adapt. Now’s the moment to give more time to him and when we need him, he’ll be ready.”

KRISTOFFER NORDFELDT (Swansea City)
After Lucasz Fabianski allowed four goals past him on Saturday lunchtime, goalkeeper Nordfeldt might have been excited about his ninth Swansea appearance in his third season in Wales. So his ‘telegraphed pass’ allowing MK Dons to open the scoring on Tuesday night will have sunk his Swedish heart. Back to the bench you go, Kristoffer, along with Mike van der Hoorn and Jay Fulton, none of whom made a case to start against Crystal Palace on Saturday.

JASON LOKILO (Crystal Palace)
Who? Well you have every right to ask that, because we had to ‘do a Danny Rose’ on the Belgian winger when seeing his name in the Palace line-up for the clash with Ipswich. He is 19, was impressive in pre-season and Frank De Boer clearly thought him worthy of the risk after two Premier League games without a goal. Reviews range from ‘didn’t really seize the opportunity’ to ‘failed to capitalise’ so we suspect that Lokilo has not put a stop to Palace trying to buy Oliver Burke. Though he certainly looked better when moved wider right late in the game.

Can certainly see why Lokilo is highly rated by de Boer but I think he's far better off going out on loan. Not ready yet.

LEONARDO ULLOA (Leicester City)
While Islam Slimani and Demarai Gray seized their chances against Sheffield United, the Argentine – who started only three Premier League games last season – ‘huffed and puffed but struggled to make his mark on the game’, according to the Leicester Mercury. We cannot quite believe he is still there. Surely a Championship loan move beckons, though struggling to make a mark against Sheffield United is not a great audition for a move.