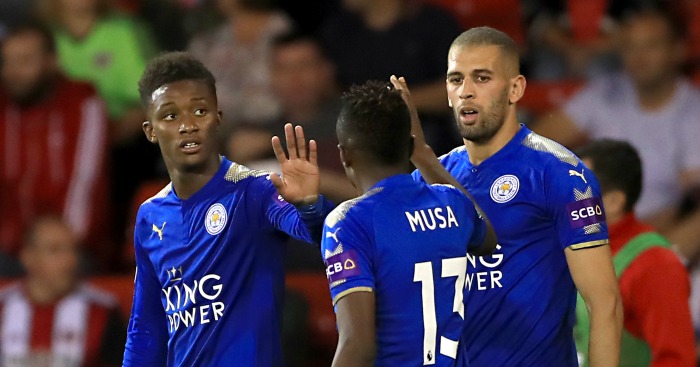 JAMES McCARTHUR (Crystal Palace)
When you have lost your first two games of the season (one of them to the runaway relegation favourites) without scoring a single goal, the last thing you need is a cup tie against a high-flying Championship side managed by a wily old fox. But thankfully for Palace and Frank De Boer, Mick McCarthy made 11 Ipswich changes and Palace won 2-1. Both goals came from the boot(s) of James McCarthur, who had played 17 minutes for Palace in their opening two Premier League games. “Two fantastic goals of James McArthur, one with his left, one with his right,” said De Boer. The Croydon Advertiser say McCarthur ‘controlled the midfield well and tried to make things happen with a typically industrious display’, and they may well need that this weekend against Swansea.

LYS MOUSSET (Bournemouth)
After two disappointing Premier League starts from last season’s hero Josh King, Jermain Defoe promised to score a hat-trick on his full Bournemouth debut against Birmingham and did not deliver; France Under-21 striker Lys Mousset made no such promises and at least delivered a performance full of pace and verve, with his confidence clearly unaffected by playing just 12 minutes of the Cherries’ opening two games. He also bagged himself an assist from a performance that clearly moved this otherwise-uncreative fan…

ISLAM SLIMANI (Leicester City)
“It was important to give the fringe players, or those who haven’t played, some game time and when you do that you hope they’ll respond in the right way,” said Leicester boss Craig Shakespeare and Islam Slimani certainly did that, scoring two goals from two chances against Sheffield United. What a fall from grace for the £28m man who joined the Foxes last summer after a 27-goal season in Portugal. But there was no sign in his performance that he was p***ed off at playing just 14 minutes in the two opening Premier League games.

I thought @slimaniislam shaded it for me. He worked hard from minute one got two well finished goals. V impressive. #LCFC https://t.co/8lufzKtZcN

DEMARAI GRAY (Leicester City)
It is frankly a bizarre state of affairs that Liverpool and Tottenham are supposedly very interested in signing Demarai Gray and yet his two substitute appearances in the Premier League this season for Leicester have come in the 88th and 89th minutes. Presumably that will change if Riyad Mahrez ever gets his wish and leaves Leicester, but Gray gave a timely reminder that he exists with a goal and an assist against Championship Sheffield United. “They’re part of the squad and they carry on,” said Shakespeare when asked about Gray, who has now been linked with a £25m move to Bournemouth. He’s certainly an upgrade on Jordon Ibe.

SALOMON RONDON (West Brom)
It’s hard to argue that you deserve a starting spot when your team has won both their opening games with you playing just a couple of minutes, but Salomon Rondon reminded Tony Pulis of his rather large existence with a goal within 11 minutes of the opening whistle on Tuesday night against Accrington Stanley.

Well played big man, good to see you back amongst the goals. Good team performance! Round three here we come. UP THE ALBION!