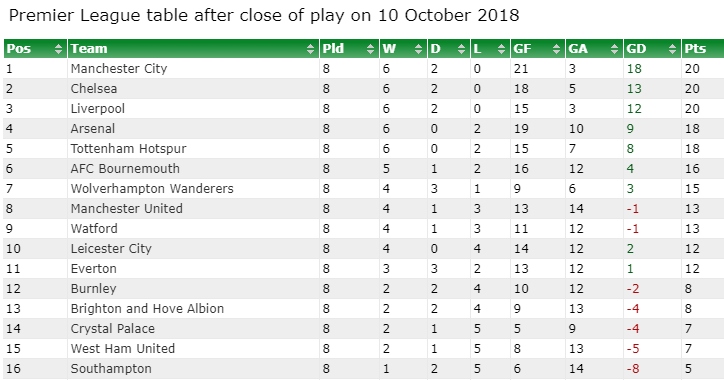 Five of the Big Six are doing worse than the same stage last season. To the tune of 24 points…

Why? Quite simply, that bloody defence. This time last season, City had conceded three goals in their first eight games and a 0-0 with Liverpool marked their fourth consecutive clean sheet. Of the back four that started that game at Anfield – Walker, Stones, Laporte, Mendy – not a single player ended the 2-0 defeat to Wolves this weekend as City conceded their eighth and ninth goals of the season. They were utterly lacking in pace at the back and were torn apart by a Wolves side made for the counter-attack. Laporte’s injury did not just cost City their best defender but potentially the title. The opportunity for a fix that comes in January may well come too late.

This is City’s worst start to a season since 2013/14 under Manuel Pellegrini. The bright side? They won the title that season. The dark side? Liverpool were then equally flawed.

Why? As tempting as it is to say Eden Hazard, that really is a red herring as Chelsea have scored exactly the same number of goals (18) this year as last. Chelsea’s issue – and it may well be solved now as their last two Premier League wins have come with some comfort – has laid in maintaining a performance over the full 90 minutes, with points thrown away against Leicester and then unforgivably Sheffield United. In hindsight, we have to write off the opening weekend 4-0 defeat to Manchester United as a blip (to both sides); we certainly could not imagine a repeat of that scoreline now that N’Golo Kante has returned and Fikayo Tomori has settled into the back four.

Why? You can cite the defence but we are asking what has changed, not what has remained infuriatingly the same. And what has changed is a loss of potential goalscorers, which can only partly be explained by the absence of Alexandre Lacazette, who was papering over the cracks of the Gunners’ system failures alongside Pierre-Emerick Aubameyang this time last year. Arsenal scored 19 goals in the first eight games of last season thanks to ten different goalscorers. This season? 13 goals from six goalscorers. Of the front four that started against Bournemouth on Sunday, only Aubameyang had actually scored a Premier League goal for Arsenal from open play. The man needs some help.

Why? Far too many issues to list here but the key difference between the Tottenham of October 2018 and the Tottenham of October 2019 is that they are no longer getting away with poor performances. That defence is another year older – three of the back four against Brighton were 30-plus – and their team’s leading two centre-halves and their most creative midfielder are almost certainly in their final year at the club. It looked like the end was near for this Spurs side when they got battered by Bayern Munich last week and on Saturday they looked like they were suffering from PTSD. Mauricio Pochettino really should have gone in the summer; he must have seen this coming after a season when they tasted ‘success’ despite some wretched performances.

Why? Why indeed have Manchester United dropped from the heady heights of eighth with 13 points to the lows of 12th place with nine points? The truth is that Ole Gunnar Solskjaer has (sort of) fixed United’s defensive problems but they are mustering basically the same number of shots on target per game as bottom club Watford. Pretty much exactly a year after they beat Newcastle 3-2 with ten shots on target, they lost 1-0 to the same opposition and tested Martin Dubravka just three times. And it’s hardly surprising because the only one of the seven players who produced a SOT 12 months ago started at St James’ Park on Sunday; that was the rapidly slowing Juan Mata.

A year ago, Jose Mourinho could start Romelu Lukaku, Marcus Rashford and Anthony Martial and then bring on Alexis Sanchez to score the winner from the bench. On Sunday, United’s front three was the faltering Rashford, Daniel James and Andreas Pereira. And that starkly illustrates the issue. How can you spend considerable money and still end up markedly weaker?