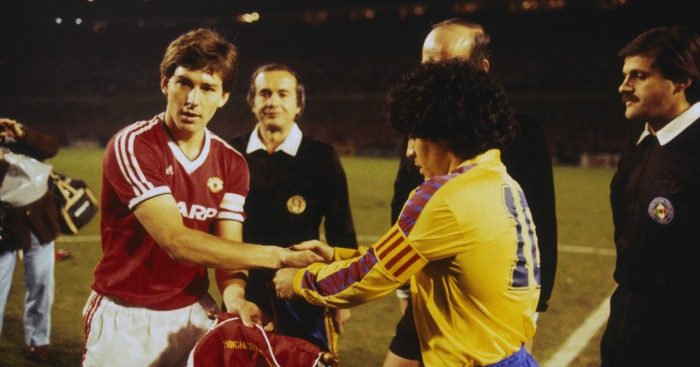 With Manchester United having to overcome a first-leg deficit against the mighty FC Midtjylland of Denmark, what better way to get in the mood than by remembering some great European comebacks against slightly more auspicious opposition?

5) vs Olympiakos, European Cup last-16, March 2014
Until the Champions League knockout stage, the high of David Moyes’ time in charge of Manchester United had been the 4-1 victory over Swansea on the opening day. What followed was a dour, embarrassing slump complete with messages on planes and a man trying to tread water having tied 20 bricks to his legs.

For one night only though, Moyes inspired his United troops. Alejandro Dominguez and Joel Campbell had taken the tie out of their grasp in Greece, with a victory by at least three goals required at home to progress in normal time. They only bloody did it.

Robin van Persie was the hero, scoring his first European Cup hat-trick to confirm United’s passage into the quarter-finals for the first time since 2011. Van Persie scored a penalty after 25 minutes, a second just before half-time and a third seven minutes after the break. It may only have been a temporary stay of execution, but new life was breathed into United’s dismal season.

4) vs Athletic Bilbao, European Cup quarter-final, February 1957
The 1956/57 European Cup was United’s first foray into continental competition, and Matt Busby led his side to significant success. Playing their home ties at Maine Road as Old Trafford was yet to have floodlights installed, United beat Anderlecht and Borussia Dortmund 12-0 and 3-2 on aggregate respectively.

In the quarter-finals, they faced a highly-fancied Athletic Bilbao side. United were 5-2 down after 85 minutes of the first leg in Spain, but scored late through Billy Whelan to give themselves a glimmer of hope.

In front of a crowd of 50,000 at Maine Road, United won the second leg 3-0 to record a result that the Daily Express called ‘the greatest victory in soccer history’. Eventual winners Real Madrid would eliminate United in the semi-finals, but the Busby Babes had done the club proud.

3) vs Juventus, European Cup semi-final, April 1999
It’s hardly a spoiler to reveal that the European Cup final of 1999 comes later on in this list, but there would have been no Bayern Munich without Juventus.

Not once but twice did United look buried in the tie. Antonio Conte’s goal at Old Trafford looked to have won the first leg, only for Ryan Giggs to score a late, late equaliser and give Alex Ferguson’s team something to fight for in Turin.

After 11 minutes of the second leg, they might well not have bothered. Filippo Inzaghi had scored twice to leave United needing at least two goals and worryingly vulnerable in defence. Cue one of the all-time great individual performances, as Roy Keane ignored his impending European suspension to carry every one of his teammates through to the final.

Having lost 2-0 in the Nou Camp to a team including Victor Munoz, Bernd Schuster and Diego Maradona, United’s chances of overturning the deficit seemed slim. Nobody told Bryan Robson.

Captain Marvel scored a diving header in the first half to give United hope, before he turned home the rebound after goalkeeper Javier Urruticoechea had fumbled a cross. With the game heading for extra-time, Frank Stapleton scored from a tight angle to take United through.

“The first game hadn’t gone to plan and I blamed myself because I’d had a couple of really good chances, so I just felt I owed the lads,” Robson told ManUtd.com year later. “And the fans gave us so much energy – it was the best atmosphere I ever experienced at Old Trafford. A great win and great memories. My name was being sung and my back slapped till it hurt. But it was one of those nights you dream about and treasure for the rest of your life.”

1) vs Bayern Munich, European Cup final, May 1999
“That balmy night in Barcelona”. The plain white Nike ball with the large black swoosh. Silver Bayern shirts with maroon trim, like an Aston Villa kit designed by David Bowie. Montserrat Caballé singing ‘Barcelona’, with Freddie Mercury accompanying her on the big screen. No Paul Scholes. No Roy Keane. Jesper Blomqvist. Ronny Johnsen’s foul on Carsten Jancker. Mario Basler’s free-kick. Markus Babbel’s missed header amid Bayern dominance. Peter Schemichel’s fingertip save from Stefan Effenberg. Mehmet Scholl’s shot off the post, into the hands of Schmeichel; game still on, just. Jancker’s overhead kick off the bar; game still on, just. Three minutes of injury time. Schmeichel up for the corner. Giggs shot. Sheringham stabs home. Jubilation. Another corner. No Schmeichel this time. Sheringham flicks on. Solskjaer the only one there. Roof of the net. Arms aloft. Sliding on knees. Cartwheels at the other end. Pierluigi Collina picking Bayern players off the turf. Sami Kuffour beating the pitch hard enough to make the whole world shake. Football, bloody hell.