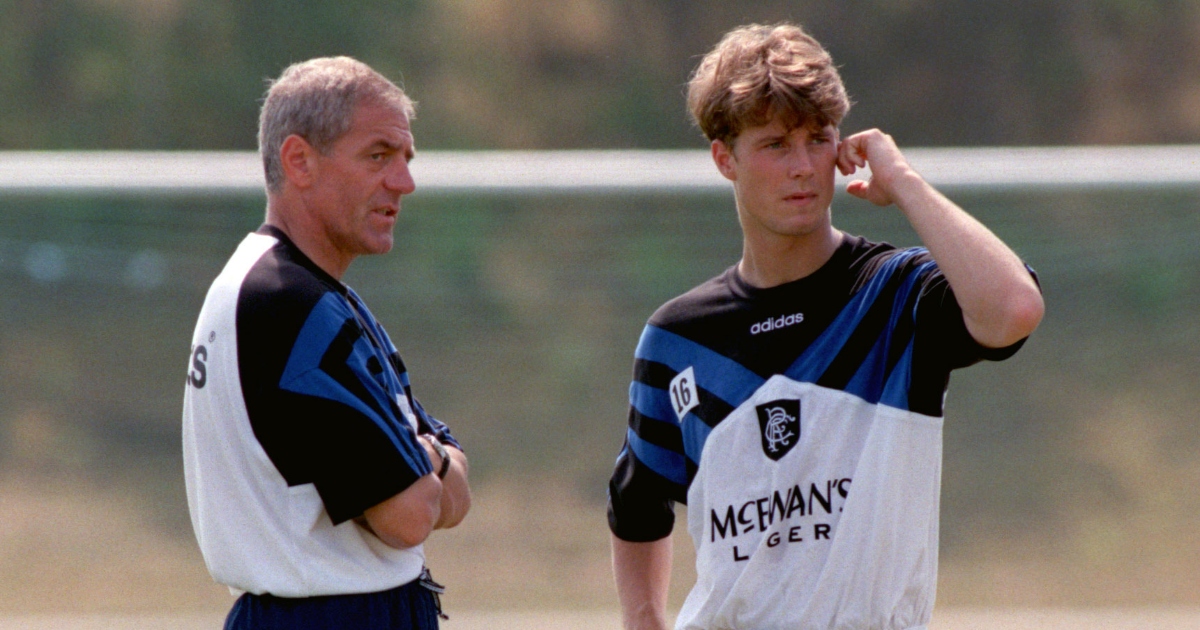 Tributes have flown in after Scottish football legend Walter Smith sadly passed away at the age of 73 on Tuesday morning.

Smith won ten Scottish titles, five Scottish Cups, six League Cups and reached the UEFA Cup final in 2008 during his time as Rangers boss. He enjoyed two successful spells at Ibrox, taking charge for seven years in the ’90s and then for another four and a half between 2007 and 2011. Smith also enjoyed success with the Scotland national team and Everton

The Scottish football great managed some incredible players in his managerial career; here we pick out five…

Paul Gascoigne
A “father figure” to Gascoigne, Smith was Gazza’s boss at Everton in the early 2000s, but much more famously at Ibrox between 1995 and 1998.

The Newcastle youth product endured a rollercoaster of a career, but probably enjoyed his best spell at Rangers on both a personal and footballing level. He was relaxed in Glasgow and got on superbly with the fans.

Despite joining in 1995, the transfer had already been in the pipeline after Smith and Gazza met in Florida during their summer holidays in 1993 while the Englishman was a Lazio player. The midfielder punted a ball over Smith’s son, into sunbathers before landing in the ocean – which did not put the Gers boss off signing him. The Teddy Bears were deep into a mission to retain league title after league title, and when a deal became possible Smith flew over to Rome and hunted his transfer target down, arriving on his doorstep to convince Gazza to swap Rome for Govan. How tempting. But tempted he was, and he signed as Rangers chased nine in a row.

“When Walter Smith spoke to me about joining Rangers, he asked me what I missed most about my game and I replied ‘smiling’,” Gascoigne said in 2019. “He told me that I was right and that Rangers would put the smile back on my face and get me enjoying my football again – and he was right.”

On the pitch, he was a genius. He scored in his first Old Firm derby and ended his first season in Scotland by scoring a famous hat-trick in a 3-1 win against Aberdeen to seal the league title. He was named Player of the Year in 1995/96 as the Gers also won the Scottish Cup, scoring 19 goals in 42 matches.

Smith and Gascoigne had an incredible relationship. The manager was like the frustrated dad at times, but admitted to giving the midfielder preferential treatment. From banishing him from the training ground to having him around for Christmas dinner, there are many stories about Gazza’s time in Glasgow.

Brian Laudrup
Another great playing in Italy that was sought by Smith. Rangers were a very ambitious side in the ’90s – a club seeking European glory alongside their domestic dominance. A two-time Danish Player of the Year, Champions League-winning, Serie A-winning, Euro ’92-winning superstar would sign for the Gers in 1994 and be a roaring success at Ibrox.

Integral in helping the blue side of Glasgow win a third of their famous nine consecutive league titles, Laudrup enjoyed three incredible seasons at Ibrox, alongside one disappointing campaign – his last at the club – in 1997-98. That was his and Smith’s final year in Scotland, the manager moving to Merseyside and continuing his desire to represent the blue half of football-driven cities.

Laudrup described his time at Rangers as “the four best years of my career”. Playing alongside the likes of Gascoigne, winning trophy after trophy, being adored by fans and being managed by a Scottish football icon will certainly help you enjoy a time at a club, no matter who it is you are representing. Smith gave the Dane a free role in his team, allowing the tricky forward to express himself and make things happen in the final third. He set up the winning goal on his debut during a 2-1 win against Motherwell, slipping in Duncan Ferguson to secure the three points.

The Denmark legend stood at 6ft tall, yet had an incredible burst of pace and breathtaking technical ability, making it near-impossible to get him off the ball. In his first season he scored 13 in 38 appearances, with his playmaking ability taking centre stage over his goalscoring talents. Laudrup won both the Scottish Football Writers and Scottish PFA Player of the Year awards in his first season at Ibrox – also taking home his third Danish Player of the Year award.

David Weir
To include only world-class attacking players would be unfair, so mentioning Smith’s most-used player during his managerial career seems the right thing to do. Described as his “best pound-for-pound signing”, Weir didn’t cost the Teddy Bears a single penny.

Weir played under Smith for Everton, Scotland and Rangers, joining the Toffees in 1999 from Hearts during the manager’s second season in charge. The player would spend eight years at Goodison before moving to Ibrox in January 2007. The defender initially signed on a six-month deal, but was rewarded for his fine performances with a further one-year contract.

He played into his 40s, becoming the third-oldest player to compete in the Champions League, and then the joint oldest outfield player ever in the same competition in 2010. Weir was an important player under Smith for both club and country. He played 180 minutes as Scotland beat France 1-0 at Hampden Park in 2006 and then again in Paris in 2007.

The first player on this list to play under Smith at Rangers during his second time in charge of the Scottish giants, Weir won three league titles in a row between 2009 and 2011, as well as back-to-back Scottish Cups and three League Cups. At the ripe age of 40, the defender was voted the Scottish Premier League and the Scottish Football Writers Player of the Year.

Weir was an integral part of that incredible 07/08 campaign that saw the Gers reach the UEFA Cup final, losing in Manchester against Zenit, who were managed by former Rangers boss Dick Advocaat. Rangers were hugely successful in that season, but it could have been so much better. They were top of the table for the majority but fell short, losing the title to Celtic. Obviously, the UEFA Cup final ended in a heartbreaking defeat, but it was an amazing run for the fans and team. They were not trophyless, however. A domestic cup double, beating Dundee United on penalties in the League Cup final, and Queen of the South 3-2 in the Scottish Cup final, made sure of that.

Ally McCoist
McCoist was not only a terrific player under Smith’s management, but became his assistant boss after his retirement, and enjoyed a very close relationship with the late manager. He was always going to take the reins once Smith retired, and he did just that in 2011. During Rangers’ 2008 Scottish Cup run, McCoist took charge of each match, which was not revealed until the trophy had been secured.

“Obviously, Walter had me in mind for the manager’s position when he stepped down, and for a couple of the Scottish Cup runs he let me take the team. I’d do the preparation and the training, but obviously he’d be there. I’d do the team talk, all that kind of stuff,” the former striker said after the win against QOTS.

‘Super Ally’ spent 15 terrific years at Ibrox, winning his first major trophy in his debut season. His first league title did not come until 86/87 however – which was incidentally Smith’s first year as Rangers assistant manager. McCoist was there for the whole ride as the Gers won nine in a row, and without him it definitely would not have been such a smooth ride.

He is Rangers’ all-time leading goalscorer with 355 in all competitions, and nobody has scored more league goals than his 251 in royal blue. In 1992, McCoist became the first Scot to win the European Golden Boot, and he retained his award the following season. He was a goalscoring demon, to say the least.

Smith was promoted to manager in 1991 – replacing Graeme Souness – and the Scottish manager revitalised McCoist’s career. If the back-to-back Golden Boots don’t tell you that, nothing will. He was one of Europe’s top marksmen throughout the decade, eventually leaving Ibrox for Kilmarnock in the summer of 1998. His last Rangers goal came in the Scottish Cup final, but the Gers could not win the match, losing to Hearts.

“He was my boss, my coach, my second father. He became one of my best friends.”

Andy Goram
Simply nicknamed ‘The Goalie’, Goram was an absolute beast in between the sticks, and actually a handy cricket player nowadays.

Goram joined Rangers in the summer of 1991, making his debut against St Johnstone in a 6-0 victory. He received criticism in the early stages of his Gers career, but soon settled in nicely and became one of the first names on the teamsheet under Smith. He won a domestic treble in his second season and his terrific performances were recognised as he was awarded the Scottish Football Writers and Scottish Professional Footballers Association Player of the Year awards.

In 1996, Celtic manager Tommy Burns said: “If anyone gets round to doing my tombstone, it will have to read: ‘Andy Goram Broke My Heart‘.” In 2001, Goram was voted the best goalkeeper in Rangers’ history by the club’s fans. The point being, he was an incredible keeper.

However, his relationship with Smith was not a straightforward one. Describing his only regret as a professional, Goram was sent on a short holiday by the Rangers boss, only he didn’t return on time. The shot-stopper missed his flight after a night out with his former Oldham Athletic teammates. A fight with a Dundee United fan didn’t help, either. When he returned to Scotland he was put on the transfer list by Smith and told that there was no coming back. Goram was devastated, but adamant he would win his place back. He improved his fitness and was back in the team after avoiding being sold.

“Other managers I have played for you think ‘I don’t give a f***’ but to disrespect Walter Smith after what he has done for me and the way he has looked after me is my biggest disappointment,” Goram said in 2019.