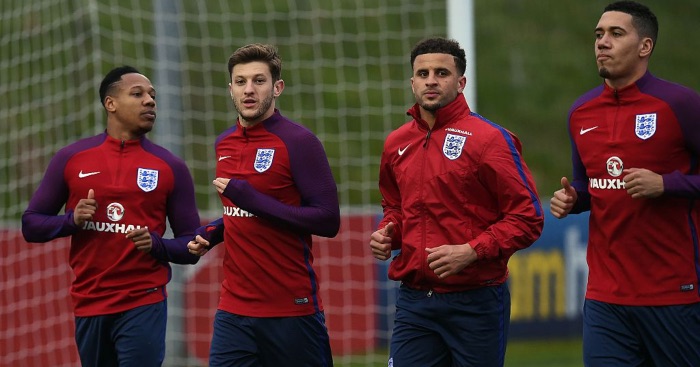 Roy Keane pulled no punches in the ITV studio on Friday night as he suggested Jesse Lingard and Dele Alli may have played their last games for England. While the form of this England duo means they have rightly been left out in the cold by Gareth Southgate for the recent qualifiers, the view that they may already have hung up their international boots is premature. The same cannot be said of these five England internationals, who won’t play for the national team again despite having plenty left in the tank…

Nathaniel Clyne
It wasn’t long ago – before England had world-class right-backs coming out of their ears – that Nathaniel Clyne was vying to be England’s first choice in that position. A serious back injury, followed by a cruciate ligament rupture has meant that Clyne has barely played a game of football for the last two years and looks unlikely to play for Liverpool again, let alone the national team. With Trent Alexander-Arnold and Joe Gomez ahead of him in the Anfield pecking order and Aaron Wan-Bissaka, Kyle Walker and Kieron Trippier added to those options for England, former Saints right-back Clyne has as much hope of returning for England as an extra lion being added to the crest on the shirt he used to wear.

Adam Lallana
The Liverpool man has played a measly 10 minutes in three appearances for Liverpool this season. Jurgen Klopp suggested that Lallana may be utilised in a deeper midfield role for the Reds this season, after some decent pre-season appearances in the ‘Jorginho’ role. But with Fabinho, Jordan Henderson and James Milner the preferred options in that position, it looks very much like another season warming the bench for the former Saints captain.

Lallana’s last appearance for England was in a friendly against Italy in March 2018, and his selection even at that point appeared out of left field. A move away from Liverpool could yet revitalise his hopes of a second coming for England, but the performances of the likes of James Maddison and Mason Mount appear to be tugging at the thread from which Lallana’s international future hangs.

Ryan Bertrand
Roy Keane described Danny Rose’s performance for England against the Czech Republic on Friday night as “abysmal” and despite England’s left-back options being the antithesis of the situation on the opposite side of the pitch, Ryan Bertrand still can’t make the squad. The fact that Rose is still being selected ahead of him, despite some lamentable performances for Spurs this season, brings Southgate’s ‘in form’ selection policy under scrutiny and suggests the England manager has lost all confidence in Bertrand and that his last England cap in November 2017 will be his last ever.

Joe Hart
Has there been a more pronounced and speedy fall from grace than that of England’s former number one? Untouchable as first-choice shot-stopper for so long, 75 international caps by the age of 30, Joe Hart is now third choice at Burnley.

When he does occasionally play it seems that a crest-fallen Hart, slumped helplessly between his posts after conceding a fourth, maybe fifth, goal is the only possible outcome. Rather than the belligerent goalkeeper we were used to seeing at the peak of his career, there’s now just a shell of a man just about keeping his head above water through the memory of long past success.

Jamie Vardy
Yes he retired, but he shouldn’t have. If there’s a player on this list that should still be in that England squad it’s…… Jamie Vardy. The Leicester City man has been superb for the Foxes so far this season, with five goals and an assist in the opening eight Premier League games. Brendan Rodgers has consistently lauded his striker as one of the best in the world, insisting he wouldn’t swap Vardy for England captain Harry Kane. Despite the necessity for taking everything the irritatingly positive Rodgers says with a pinch of salt, he’s got a point – Vardy remains a very potent striker.

Goal of the Day!

That’s not something that can be said of Marcus Rashford, and with every inclusion of the Manchester United striker, Gareth Southgate’s claim that he picks players on form looks more and more erroneous and instead points to something of a blind faith selection policy. Southgate wouldn’t be the first manager to tempt a former international out of retirement, and if there’s one thing we know Vardy can’t resist, it’s a glass of port from a Lucozade bottle. Just bear it in mind Gareth…