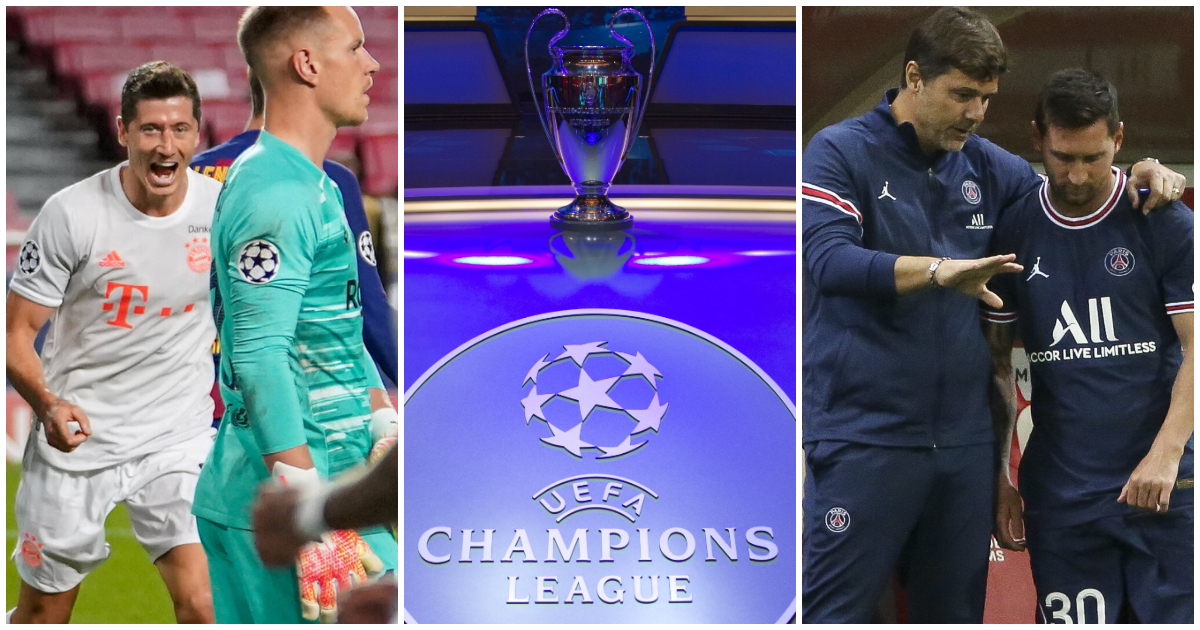 Barcelona v Bayern Munich
Just the 25 goals in the last five Champions League matches between these two heavyweights. But since Bayern scored eight of them in their last meeting – the first time since 1946 Barca had conceded so many in a competitive game – in last year’s quarter-final, revenge of a sort must be in the Catalans’ sights, even if it has been all change at the crumbling Nou Camp over the last year.

While hardly typical, that victory was the latest in a run of them for Bayern over Barca. The Bavarians have triumphed in four of their last five meetings and seven of the last 11. And travelling holds little fear for Bayern – their last European away defeat was at this stage four years ago to PSG. Since then, they’ve won 14 and drawn four away from the Allianz Arena.

With Ronald Koeman still piecing his side together after a torrid summer, the Barca coach will cling to any advantage he can find. He might find one in the respective side’s schedules. Barca’s La Liga clash with Sevilla this weekend was postponed because of the late-running international break in South America.

In contrast, Bayern’s players will have arrived back in Munich on Thursday afternoon; travelled to Leipzig for Saturday evening’s crunch Bundesliga fixture – they won 4-1 – before returning to Bavaria prior to flying to Barcelona on Monday. At least the Bayern contingent weren’t on board the Germany plane that was forced to land in Edinburgh in the early hours of Thursday morning.

Club Brugge v PSG
If not now for PSG, then when?

Mauricio Pochettino takes his ridiculous squad to Brugge for a serene start to a Champions League campaign which simply must end in triumph next May in St Petersburg. With this likely to be the only season during which Poch can field Lionel Messi, Kylian Mbappe and Neymar together, there are no excuses.

Mbappe has fond memories of Bruges. It was there he bagged a half-hour hat-trick in a 5-0 win two seasons ago when these clubs were last paired together.

Genk went one better than PSG by sticking six past Brugge last week, which hardly bodes well for Simon Mignolet as he prepares to stand before PSG’s firing squad. With City and Leipzig in the same group, it could become a familiar feeling for the former Liverpool keeper. At least Brugge coach Paul Clement can catch up with some old friends from his time assisting Carlo Ancelotti at PSG.

Liverpool v AC Milan
These two heavyweights only usually meet in Champions League finals. Wednesday’s clash at Anfield will be only the third meeting between Liverpool and Milan in European competition. The other two were the 2005 and 2007 showpieces.

Despite both clubs’ pedigree, this is unfamiliar territory for the modern Milan. Not since 2013/14 have the Rossoneri featured in the Champions League group stage – and they have been placed in a pig of a group, with Porto and Atletico Madrid to get past too if they are to reach the knockout stages for the first time since being dumped out in the round of 16 by Atletico seven years ago.

Liverpool’s last two campaigns have each been halted by Madrid sides, with Real beating the Reds in last season’s quarter-finals and Atletico doing the same in 2020’s round of 16.

Zlatan Ibrahimovic is back from his knee injury and back among the goals in time for Milan’s first ever visit to Anfield. Zlatan v Virgil van Dijk should be one of the clashes of the Champions League group stage.

Inter and Real find themselves in the same group, also with Shakhtar Donetsk, for the second year running, with Moldovan side Sheriff taking the place of Borussia Monchengladbach.

Last season, Real took six points of Inter to finish top of the group, while Inter, embarrassingly, found themselves propping up the pool. Their last three Champions League campaigns have ended at the group stage, which new coach Simone Inzaghi, who took Lazio to the quarter-finals last year, could target as a tangible sign of progress on his watch.

It has been a summer of change too at Real, with Ancelotti taking over from Zinedine Zidane, with a defensive rebuild first on the returning coach’s job list. The San Siro meeting is an opportunity for both sides to put down a marker in Europe after serene starts domestically.

F365 Features: Ronaldo or Bruno on Man Utd’s free-kicks: Should we care?

Young Boys v Manchester United
The last time United were in Berne, Paul Pogba was on fire and the midfielder celebrated his brace by thanking Jose Mourinho. Of course, it was an uneasy peace…

The Red Devils return to Switzerland at the start of a Champions League campaign in which little has been said of their prospects. The primary target remains the Premier League, but with the strength in depth available to Ole Gunnar Solskjaer, there is no reason why the Champions League should not place higher among their priorities.

After a busy international break and the euphoria of Cristiano Ronaldo returning to Old Trafford on Saturday, Solskjaer may opt to rotate, perhaps using the artificial surface as an excuse. Young Boys still play on artificial turf – they have done so since 2005. Which is fine for the Champions League, but not League Two, apparently.

Unlike recent years, United’s players know now that there is no room for passengers. Anyone not performing can be replaced so whoever comes in to Solskjaer’s XI will need to impress.