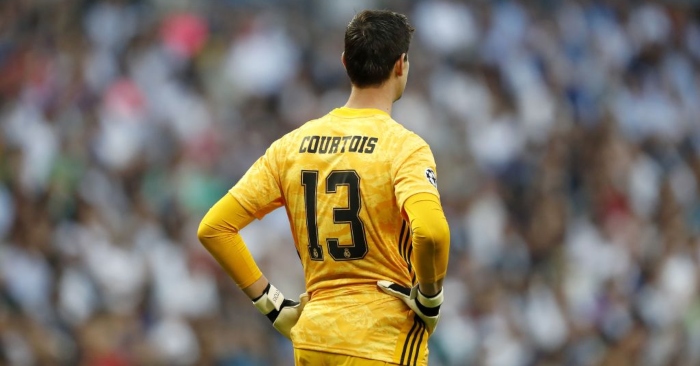 Just as the La Liga season was starting to gather real pace, it has been brought to a juddering halt by the second international break of the nascent season.

Thankfully, the week leading up to the break was packed with enough incidents and accidents to tide the Spanish football press over until la selección’s Scandi double-header against Norway and Sweden, which begins on Saturday in Oslo.

As the grim reality of the two-week international hiatus starts to bite, here are the main talking points in Spanish football…

Tough times for Thibaut
When there is a problem at Real Madrid, there is always a scapegoat. This time, it’s Thibaut Courtois. Though they top the league, Madrid’s start to the Champions League campaign has been woeful, and the blame for the 2-2 draw against Club Brugge last week was placed firmly at the door of Courtois. Even Zinedine Zidane publicly pointed the finger at his keeper after the match. The Belgian conceded two first-half goals before being substituted at half-time, and his early departure sparked rumours of an anxiety attack, which were later refuted by the club, saying that he had in fact suffered a bout of gastroenteritis. Whatever the real reason, it was enough to keep him out of Saturday’s 4-2 win over Granada, but he will return for Belgium this week.

His difficult first half against Club Brugge and subsequent substitution put him right under the microscope of the Madrid media, with one prominent commentator saying he “doesn’t fit the shirt”, and that being good is not enough for a Real Madrid goalkeeper – “you have to be a miracle worker”. The front cover of Diario AS pointed to his inferior record for Real Madrid when compared with his stats for his previous clubs and national side, under the headline ‘This is not Courtois’. The man himself insists he can face up to the scrutiny of being Madrid’s number one, and is a veteran of several pressure situations throughout his career. Despite would some would have you believe, he hasn’t become awful overnight, and the international break could provide him with a chance to clear his mind and restore his confidence before returning to his club.

If Arsenal’s back four had a goalkeeping equivalent, it would be Thibaut Courtois.

VAR wars
Almost every team has had some gripe or other with VAR since it was introduced last season, but Leganés are the first team to request a replay due to a dodgy decision. In their 2-1 home defeat against Levante on Saturday, the referee awarded a penalty to the visitors after Roger Martí was brought down, but replays suggested that the contact was made outside the area. The referee was unable to contact the VAR officials for confirmation due to a technical issue, but eventually the word came via the fourth official that VAR had rubber-stamped the referee’s decision to award the penalty. Martí scored, and set the Granotes up for their first win since August, and left Leganés rooted to the bottom, still without a win. The indignant Lega president Victoria Pavón lodged a request with the RFEF to replay the game from the 44th minute due to the alleged VAR failure. Expect the authorities to give the appeal very short shrift.

Toothless Atleti
Eight games into the season, and Atlético Madrid have the joint-meanest defence in the league, having conceded just four times. Sounds like Atleti. The problem is, they’ve only scored seven, and only five teams have scored fewer. In fact, they’ve failed to trouble the scorers at all in four of their last five La Liga matches. Their inability to find the net has essentially given Real Madrid and Barcelona a free pass to occupy the top two places, despite both sides’ relatively iffy early-season form. In spite of their pretty potent attacking force of Diego Costa, Álvaro Morata and João Félix, chances have been hard to come by, and they are ranked 18th of 20 in terms of shots per game. The fact that they are third in the table suggests that they are as efficient as ever, but Diego Simeone needs to find a way to unlock their attacking potential if they are to challenge for the title this season.

Dembélé in the dock
Barcelona’s Ousmane Dembélé looks set to miss the upcoming clásico after talking himself into a red card and a two-match ban in his side’s 4-0 thrashing of Sevilla on Sunday. After team-mate Ronald Araújo was sent off late on for a pretty soft challenge on Javier Hernández, Dembélé told the referee “eres muy malo”, or “you’re very bad”. It was certainly dissent, but surely referees hear worse than that all the time and don’t pull out their cards. Unfortunately for Dembélé, the referee Antonio Mateu Lahoz – essentially the Spanish Mike Dean – doesn’t stand for any backchat. Lionel Messi provided the case for the defence, insisting that Dembélé “doesn’t know how to speak” (we assume the word ‘Spanish’was implied), but Mateu Lahoz was unmoved. Barça have appealed the ban, and the case continues.

Legends at loggerheads
There has been drama off the pitch as well as on it for Barcelona. Legendary goalkeeper Víctor Valdés, who was appointed as under-19s coach in the summer, has been summarily sacked after a furious row with academy director Patrick Kluivert. Valdés has a reputation as a headstrong character, and was always likely to ruffle feathers in the Barça hierarchy, particularly as the club is so firmly wedded to the notion of playing the same system throughout the age groups. The argument reportedly began when Valdés adopted a 4-4-2 set-up, and Kluivert insisted he play 4-3-3 in the Barcelona mould. Valdés is said to have responded angrily, squaring up to Kluivert and telling him in pretty vulgar terms to get off his case. There was only going to be one outcome, and Valdés was sent on his way.