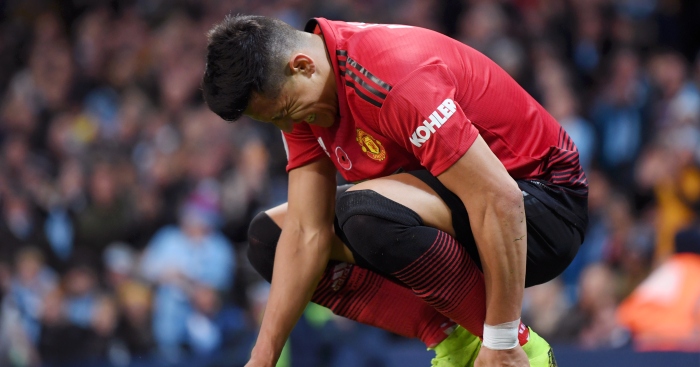 Alexis Sanchez
Jose Mourinho stopped just short of suggesting Alexis Sanchez would be ‘like a new signing’ for Manchester United – although the same cannot be said for their club website – in an interview in July. “It is not easy to come in the middle of the season,” said the Portuguese. “I’m not a big fan of the winter market because the players are coming in the middle of the season and it is not easy for them to adapt.

“So I think after a few months with us, now to start the season I think it is a perfect moment for him to establish himself as an important player for us,” he added, and therein lies the damning verdict of both player and manager. Sanchez still appears to be enjoying that long-awaited football-less summer as the anniversary of his arrival looms, while Mourinho has changed his managerial ideals only to see the gamble backfire horribly.

It never felt like a natural fit. Sanchez and Mourinho are polar footballing opposites, both too long in the tooth to consider changing, both used to getting their own way. The Chilean’s individuality at Arsenal was less of a problem because his brilliance allowed them to indulge him. He has not earned that same privilege at United, but that was the risk Mourinho chose to take.

“Let’s say we have three targets in the summer – a defender, a midfielder and an attacking player,” the manager said in January. “If in the winter you do one of the three, then in the summer you do three minus one. If we do something now, we don’t do it in the summer again.”

That Mourinho proceeded to pursue Ivan Perisic throughout the summer suggested that he had already realised his mistake, that the “attacking player” he had pushed for in January was the only one that was available, not the one he wanted. Sanchez is the best-paid player in the Premier League, but never one of his manager’s ideal front three.

‘How do you persuade the one-man band to take the bells off his shoes and the kazoo from his pocket?’ was the question to which no answer is forthcoming. Far from producing sweet music, Sanchez and Mourinho are both failing to find the right pitch.

And now Sanchez is said to be at his lowest ebb, ‘acting weird’ on Chile duty after being trusted for only 17 minutes of the derby last week. He has started only five of United’s 12 Premier League games this season. Jose Mourinho is said to have described his travails as a “mystery”, which is weird because the rest of us saw this coming.

Emerson Palmieri
For Chelsea, January transfers have always gone one of two ways. Mohamed Salah and Kevin de Bruyne both started their Premier League careers in inauspicious circumstances after arriving at Stamford Bridge in the winter months, but Gary Cahill and Branislav Ivanovic were excellent mid-season signings. There is no grey area, no middle ground, just failure or success.

Emerson Palmieri always seemed destined to be filed in the January transfer folder marked ‘Forgettable’. Antonio Conte admitted in February that he was “a bit of a disaster” in terms of persuading Chelsea to provide him with new recruits, and the proof came one month prior. The Italian’s constant complaints over transfers had been taken on board, and a back-up left-back with no international caps and fewer than 90 senior career appearances was the result.

Having asked all season for the newest games console, Conte woke up on Christmas morning to find a small gift wrapped in toilet paper. Roman Abramovich watched on as his Italian stepson sobbed uncontrollably, somewhat underwhelmed with his new wooden cup-and-ball. Emerson is Chelsea’s fifth-most expensive January signing ever, and quite easily one of their most pointless. He is yet to even make it as far as the bench in the Premier League this season.

Guido Carrillo
Some players are inextricably linked with some managers. Football is a hectic, unforgiving sport, and so it is understandable when those subjected to its harsh glare panic and scrabble around for their comfort blanket. Why take time to improve your current players when you can sign a former one you know you can trust immediately?

Mauricio Pellegrino found himself in a difficult position as Southampton manager in January 2018. In his first season in charge he had overseen a gradual descent from mid-table, with Saints first dropping into the bottom three in mid-January after months of flirting with the relegation spots. Given a winter budget to spare them from the Championship, Pellegrino went back to what – or rather who – he knew best.

Guido Carrillo had scored 36 goals in 132 games for the manager at Estudiantes. It was hardly an astonishing goalscoring rate, yet it was positively prolific in comparison to what Southampton’s forwards were offering. And so they paid a panicky club-record fee, Monaco receiving £19.3m for their fourth-choice striker.

Pellegrino was sacked two months later, Carrillo having failed to score in his first six Premier League games. The 27-year-old would manage one further goalless appearance – a seven-minute substitute cameo – under Mark Hughes before being unceremoniously dropped. Southampton did survive, but their safety net had a giant hole.

It came as no surprise when Carrillo was shipped out by Southampton in the summer, loaned to Leganes. It comes as an even smaller shock to learn that they are struggling in La Liga, and managed by some bloke called Mauricio Pellegrino.

Alexander Sørloth
“He was our first-choice striker target,” said Roy Hodgson in February, discussing the signing of Alexander Sørloth. “We’ve been following him and he has been a target for the whole of the transfer window and our discussions before that, so we were very pleased to persuade FC Midtjylland to let him go.”

The Crystal Palace manager would almost confirm that this was a player for the future in his next breath, predicting that the 22-year-old “is going to be very good”. Yet for a club struggling in the present, the £9m signing still finds himself on the periphery.

Sørloth would ordinarily be content with being eased into a competition of much greater standard than the Danish top flight, but circumstances change. Christian Benteke had scored two goals in his last 22 league games before succumbing to injury, and with Connor Wickham still sidelined, Sørloth was the next towering cab off the rank. Yet Hodgson sought to instead hitch a ride on Jordan Ayew, who has jumped the queue after arriving in the summer.

It is difficult not to feel for Sørloth, whose patience may soon be wearing thin. He has played 127 minutes in the Premier League this season. It’s pretty damning that four players have started up front for Palace and none of them are their £9m January signing.

Jordan Hugill
It was a pointless January signing at the time, and it is perhaps even more laughable now. West Ham had a squad ravaged by injuries, were in desperate need of a new central midfielder, and really could have done with some defensive reinforcements. Yet as the deadline crept up on them, they had failed to address any of their existing issues.

Their response was to fix the only thing that was not broken at the London Stadium. Jordan Hugill joined for £10m and was a signing born not of necessity but of panic – an attempt to appease a fanbase disgruntled and disappointed at a lack of new signings.

It was the equivalent of buying a llama in response to your partner saying you aren’t spontaneous enough, then protesting that you simply can’t win. West Ham would have made a mistake in not signing anyone, but only exacerbated the situation by signing the wrong player entirely. Hugill played 22 minutes of ineffective Premier League football before dropping back to his natural Championship home this summer. He scored twice last week for Middlesbrough in the 11th game of his loan spell.