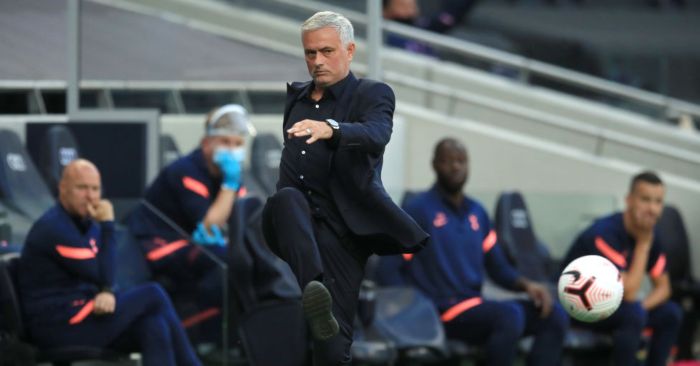 We had ten in a rather mixed bag last season. With only six games to jerk our knees at thus far let’s half the number but double the heat of the takes. Jose Mourinho will be interested.

Arsenal will finish in the top four
It had all the ingredients for the traditional Arsenal dish of disappointment with a side of despair: an away game at a promoted club with new signings to embed, a popular player left out due to an impending sale and two squad members embroiled in what the world is contractually obliged to describe as a ‘heated exchange’. Throw in an air of tentative positivity and the stage was set for the Gunners to tumble back into frustrated obscurity, staring longingly at a Champions League place they had reserved unchallenged for almost two decades.

In 2019/20, Arsenal failed to win away at any of the three clubs coming up from the Championship. Unai Emery lost to Sheffield United in October, Freddie Ljungberg drew with Norwich in December and Mikel Arteta was beaten by Aston Villa in July. It was ‘only Fulham’ on Saturday, but this was a team that had developed something of a habit of losing to ‘only’ anyone.

The backdrop of Emiliano Martinez’s exit and Dani Ceballos and Eddie Nketiah clashing in the pre-match warm-up would be morphed to suit the mood of the result. Had Arsenal lost or drawn, they would be selling a key player while the harmony in the team would be questioned. Think ‘crisis point’ and cracked badges.

But such a comfortable and commanding victory maintains the general sense of progression in this half of north London. There was Robaldinho, Mo Elneny running proceedings in the centre and Fulham falling victim to the same flowing move that has snared Manchester City and Liverpool in recent months.

Auba's curler™ vs Liverpool and Fulham
The patterns of play:
"You need a little clarity? Check the similarity!"#afc pic.twitter.com/hJCxsstkr3

Those similarities are no coincidence, rather the product of focused coaching and the drilling of movement, positioning and decision-making into players who looked aimless not long ago. Scoring the exact same goal against different calibres of opponent underlines the mastery of the overall idea.

The midfield could do with some work, with gaps that either Thomas Partey or Houssem Aouar might well fill. But this summer has been spent carefully refining the squad at little cost: the central defensive options are considerably better, Willian is the creator they craved and Pierre-Emerick Aubameyang is one of the current five best goalscorers in the world. Arsenal have not had such depth across the board for some time.

Only a nerd would suggest that ‘beating Fulham on the opening day need not cause any knee-jerk conclusions about Arsenal this season nor how far along the road in Arteta’s vision they are’. The top four beckons.

Fulham and West Brom are down
Scott Parker and Slaven Bilic should perhaps get used to this. Arsenal and Leicester are not the sort of opposition against which they ought to be definitively judged but both saw their teams acquit themselves well enough in comprehensive defeats. Fulham started poorly but ended well; West Brom started well but ended poorly. Both suffered 3-0 losses and a chastening reminder of the harsh realities of Premier League life compared to the Championship.

Fulham are gone. Aleksandar Mitrovic will provide them a more adept focal point in attack once fully fit but that does nothing to address a defence that will struggle significantly. Bear Grylls would struggle to survive on a central defensive diet of Michael Hector, Tim Ream and Maxime Le Marchand, with right-backs Kenny Tete, Denis Odoi and Cyrus Christie in reserve.

Hector is the only actual addition to a defence that conceded 81 goals in their last Premier League spell.

West Brom will fare better with forward options like Matheus Pereira and Grady Diangana, but they too have their issues in a lightweight midfield and sub-standard defence. A 36-year-old Branislav Ivanovic might not change that.

The Cottagers and the Baggies will play some excellent football and get plenty of results, but it does not feel as though either will have enough without heavy levels of investment.

Jose Mourinho will not last the season
A possible nine matches in 22 days guaranteed at least one instance of Jose Mourinho blaming a global pandemic or the entire concept of time itself for a Tottenham setback, as if no other club is dealing with the exact same obstacles. For such excuses to emerge after one game does not bode well.

You would think that a club like Tottenham would employ someone to identify and solve these various issues before the start of what is sure to be a draining season, perhaps give them an industry-leading wage and the ability to delegate such responsibilities, but no. He has greeted this campaign like a handsy distant family member at a wedding, doing his level best to avoid and ignore the inevitable and uncomfortable conversation until it is staring right at him.

Whether the tactical side of the game has moved on from Mourinho is still undecided but when you consider he is renowned for his meticulous preparation, a first ever opening-day defeat suggests he might not enjoy being given the same disadvantages from the starting blocks as everyone else. “Bad fitness” and a “bad pre-season” are exacerbated, not cured, by a constant stream of games across different competitions. Things are more likely to only get worse.

The only things that would prevent Mourinho from leaving before May in that event are his own ego and the fact Daniel Levy is utterly besotted with the manager he has craved for well over a decade. All Rise for his long-awaited fall into coaching purgatory.

Mo Salah will win the Golden Boot
For the fourth consecutive campaign, the one-season wonder has started as he means to go on. Mo Salah was almost entirely overlooked during Liverpool’s title win, receiving no nomination on the PFA Player of the Year shortlist, missing out on the Team of the Year and not even making the top three for his own club’s Player of the Season award. Leeds bore the brunt of those rejections.

Two of his goals were penalties but Illan Meslier had about as much chance with them as he did Salah’s emphatic second. Nine shots, four chances created, seven dribbles, 88 touches and even two tackles completed translated to a quite ridiculous and complete performance.

Though unable to claim the Golden Boot for a record-equalling third consecutive season, Salah finished as Liverpool’s top scorer and few would bet against him adding the 22 goals needed to bring up a Premier League century this season. An explosion in the mould of 2017/18 could be on the horizon for a player who still receives nothing close to his due credit.

Leeds will be in a relegation fight
This is the big one. Time to consider relocating both myself and my loved ones to avoid the ignominy of having my face superimposed onto Alan Hansen’s delightful beige suit and coiffed hair after Leeds secure European qualification with games to spare.

They were fun against Liverpool. Marcelo Bielsa is brilliant. It is not a bad squad. But the obvious romanticism of having Leeds back in our top-flight lives has obscured any sensible judgement. Pundits and neutral fans alike preached of a team that ‘looked like’ it belongs in the top half, patronisingly patting the heads of a team that bring a fresher feel than those it came up with.

Yet Bielsa himself did not lose perspective. “We should have created more danger when we attacked,” he said. “We were very efficient but we didn’t create enough goalscoring opportunities. We also cannot ignore we conceded four goals. A lot of those goals could have been avoided.”

The loss of Ben White has had an obvious impact and while Rodrigo will take time to adjust, they benefited more from individual mistakes than their own ingenuity. Liverpool were incredibly rusty but still had 22 shots while conceding only six. In their first game last season, also against the Championship winners at Anfield, they had just 15 efforts while relegated Norwich had 12. The Canaries were admired for their original approach but that alone is not enough.

Leeds will fare better than a club that petered out painfully come July but predictions of prosperity seem guided more by heart than head. They will finish no more than ten points above the relegation zone – and it should be said that that would represent a successful season. As it is, grandiose projections seem only to be setting them up for a mightily disappointing fall.