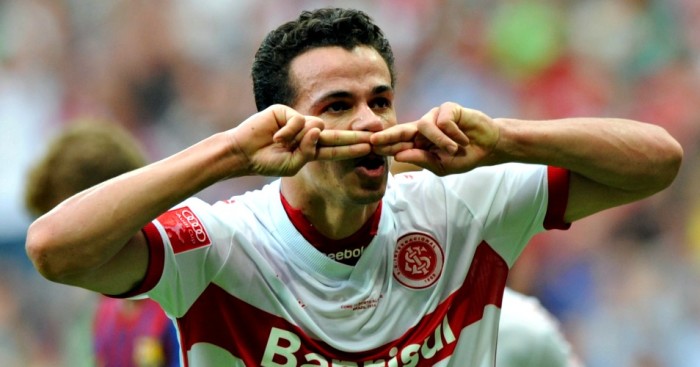 Leandro Damiao
While transfer rumours almost exclusively concern actual footballers, Tottenham found themselves constantly on the verge of signing Leandro Damiao from 2011 to 2013. It is yet to be proven that Damiao exists beyond being linked to Spurs.

The Daily Mail were responsible for instigating this experiment into football gossip, linking Spurs with a £10million deal for the fictional Damiao, who had supposedly scored 53 goals in his first two seasons at Internacional at this point, in the summer of 2011. The Mail increased the fee to £12million a fortnight later, but claimed that Spurs had a £15million bid rejected when the rumour resurfaced in January. Weird.

By this point the Daily Mirror had delved in, claiming that Spurs were chasing the ‘£25m-rated’ star alongside Arsenal. During football’s two-year ‘Damiao era’, the Brazil striker assumed a new forename of ‘Spurs target’ and was linked with the Gunners, Barcelona, Inter Milan, Liverpool, Manchester United, PSG, Juventus, Manchester City, Shakhtar Donetsk, Chelsea, Napoli, and Southampton. The one constant throughout? Each side would have to ‘battle’ Spurs for his signature.

@F365 Leandro Damiao was linked to Spurs so often by Sky they once claimed he was flying to England on Deadline Day. He wasn’t.

Spurs’ inability to close the deal even in their fabled summer transfer window of 2013 seemed to finally signal the end of the dream. But what’s this? As per SambaFoot:

‘Approaching the end of his contract, Leandro Damião leaves his future open.’

Klaas-Jan Huntelaar
Jermain Defoe, Robbie Keane, Roman Pavlyuchenko, Peter Crouch, Roberto Soldado; with a cumulative total of 98 goals in 380 appearances for an outlay of over £77million, it’s safe to say Tottenham have struggled with signing strikers in recent times. It could have been so different if they had a touch of Klaas.

From 2009 to 2013 the name Huntelaar became part of the common vernacular at White Hart Lane. From the moment the Daily Mirror began this rumour six years ago, the Dutchman became a regular member of gossip columns, with Spurs the most consistent link.

The best line to emerge from this rumour however is undoubtedly from the News of the World (remember them?): ‘Tottenham boss Harry Redknapp will fly out to Amsterdam to thrash out personal terms with Real Madrid striker Klaas-Jan Huntelaar, 25, after agreeing an £18m deal with the Spanish side.’

Joao Moutinho
Where once was Roberto Soldado, there could have been David Villa, and it could easily have been Hulk in Etienne Capoue’s place. After being sacked by Spurs in 2013, Andre Villas-Boas revealed that he wanted none of the players signed in that fateful summer by the club, and he instead had targeted Villa and Hulk as well as Joao Moutinho. They got Paulinho.

Moutinho came within quite literal minutes of joining Spurs the summer before. Paperwork prevented the deal going through in the late hours of deadline day, with a club-record £24million fee prepared for Porto. Spurs pushed for the deal once more in 2013 but lost out to Monaco. Spurs being Spurs, they did not let that faze them; earlier this year the link to Moutinho had resurfaced at the hands of the French media.

Lassana Diarra:
In the 17-month period from March 2010 to August 2011, Lassana Diarra was linked with a move to Tottenham 20 times. From ‘Tottenham expect to sign Lassana Diarra from Real Madrid in the next few days ‘(Daily Mail, 19/08/11) to ‘Harry Redknapp is prepared to release as many as seven players as he looks to make space in his squad for Adebayor and Lassana Diarra’ (Daily Telegraph, 21/08/11, and Spurs sold four players that summer overall), the Diarra link became a gossip mainstay. The French midfielder closed out 2011 being linked to Doncaster.

“It’s one of my favourite clubs in England, I really love the stadium and I know the training ground. I’d love to play for Spurs.” – February 2011.

Asked who his favourite English club was in October 2014, Van Bommel responded: “Spurs. I scored a nice goal at White Hart Lane for Netherlands once. I like their style.”

This was a love affair which lasted close to a decade, with The Guardian first reporting in 2003 that Spurs were interested in signing the then PSV captain for £8million after concluding a deal for West Ham’s Freddie Kanoute. February 2011 saw the last link, with Van Bommel riding off into the sunset little over two years later. Through years of upheaval at the club, including seven different managers including caretakers, Vam Bommel provided solace to Spurs fans.