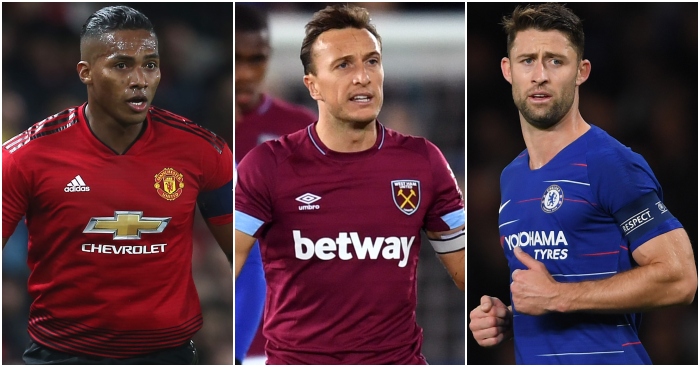 Antonio Valencia
What the hell has happened to Tony V? The Manchester United captain was exiled by Jose Mourinho, which seemed odd given how gushing the manager was of the right-back in the past. “There is no better right-back in football,” said the erstwhile manager in January 2017. “It is a privilege for us to have such a good player and such a good man.”

Mourinho presumably lurched from that viewpoint after Valencia liked an Instagram post which suggested the manager had made watching United “a punishment” and that the manager should go. The skipper was selected only twice more by Mourinho but when United axed the Portuguese boss, it was presumed that Valencia would be among the outcasts to be given another shot.

Not so. Valencia has featured in just one of Ole Gunnar Solskjaer’s 10 squads, and with his contract up at the end of the season, the 33-year-old’s Old Trafford career appears certain to end a decade after he joined from Wigan for £16million. Valencia has struggled with knee injuries and it appears that Solskjaer doubts the veteran’s ability to carry out the energy-sapping duties required of his full-backs.

United have the option of extending his contract for a further year, but reports suggest they are willing to let him have his choice of club this summer in recognition of his 10 years of service.

Gary Cahill
Gary Cahill was one of Gareth’s glory boys at the World Cup but upon his return to Chelsea, the 33-year-old was left out in the cold as Maurizio Sarri set about stamping his mark on the club. Cahill was told he could leave Chelsea last month rather than kick his heels around Cobham for the last six months of his contract but rather than put himself in the shop window, he opted to stay and take it easy.

And it isn’t as though Cahill didn’t have offers. Bloody good offers. You can understand him turning his nose up at the chance to board Fulham’s sinking ship, and perhaps even turning down half a season at Monaco to scrap at the bottom of Ligue Un. But Juventus – Juventus, for f*ck’s sake! – were said to be keen to put Cahill to work at the top of Serie A.

How did it come to this? Sarri explained in December why Chelsea have moved on from Cahill and why he has only played 21 minutes in the Premier League this term: “Maybe he is the best in the box, but our defenders may play 100 or 110 balls in a match so I need very technical defenders.”

Not many get a relegation and Champions League win in the same season. Cahill started 2011/12 at Bolton, who ultimately went down, and ended it anchoring a patched-up Chelsea defence to European glory. pic.twitter.com/EROw3s2xyf

Mark Noble
It seemed like the West Ham captain was being kept around as one of the last remaining links the Hammers retain of their Upton Park roots. Noble has been largely poor this season, but his performance against Liverpool on Monday night showed there is perhaps life in the old midfield dog yet.

The reason Noble was beginning to look like an Irons relic? Declan Rice. Manuel Pellegrini’s midfield currently features the past alongside the present and the future of West Ham, assuming the club manage to resist the inevitable offers for Rice. The 20-year-old has won 36 tackles this season and made the same number of interceptions. Noble has managed 12 tackles, the same number as Aaron ‘bite-yer-legs’ Lennon, and eight interceptions, the same as Henrikh Mkhitaryan.

Noble is not winning the ball nor is he doing a great deal with it when someone, usually Rice, presents him with it. Noble has created 12 chances in 20 appearances and he is yet to score a Premier League goal this season.

Look at Mark Noble celebrating the goal like it's a no deal Brexit pic.twitter.com/3diUUPvfvQ

Phil Jagielka
Marco Silva gave the Everton skipper an opportunity to prove himself during the new manager’s first game in charge. Jagielka got himself sent off before half-time on the opening day.

Since then, we’ve seen the centre-back for only 14 minutes. Silva insists he has not closed the door on the former England defender and Jagielka might have had a run-out at Millwall in the FA Cup last month had he not been struggling with an injury. Anyone with eyes can see that the Toffees need some leadership at the back, especially around set-pieces, but it seems unlikely now that Jagielka will be given a chance to fill that experience void.

With the signings of Kurt Zouma and Yerry Mina, Everton have certainly tried to move on from the 12-year stalwart and given his age, it would be a risk to rely too heavily on the centre-back with 380 appearances in a blue shirt. But Silva could really do with Jagielka offering his younger defenders some solid advice before he leaves Goodison Park at the end of his contract in the summer.

Aaron Ramsey
This is perhaps more a case of the player outgrowing the club. While Arsenal are tightening their belts in case they miss out on the Champions League once more, Ramsey is most likely to become the highest-paid British footballer when he moves to Juventus, most probably just after the Old Lady has celebrated an eighth consecutive title.

The Gunners made it very clear very early on that they could not afford to pay Ramsey what he, not unreasonably, was asking. Since that point, Unai Emery has been trying to ease him away from the spotlight, with the 28-year-old starting only nine of Arsenal’s 25 Premier League matches.

You might forgive Ramsey for going through the motions somewhat to preserve himself ahead of such a huge and lucrative move this summer. But the Wales star has still contributed to an Arsenal side that apparently don’t need him. Despite a relative lack of action, no Arsenal player has as many assists as Ramsey. Only eight players in the Premier League have created more goals – they have all played considerably more with six of those players having accrued more than double the number of minutes.

Aaron Ramsey one of the few Arsenal players with a spring in his step.

Probably because he knows he's f*cking off to Juventus.#MCIARS