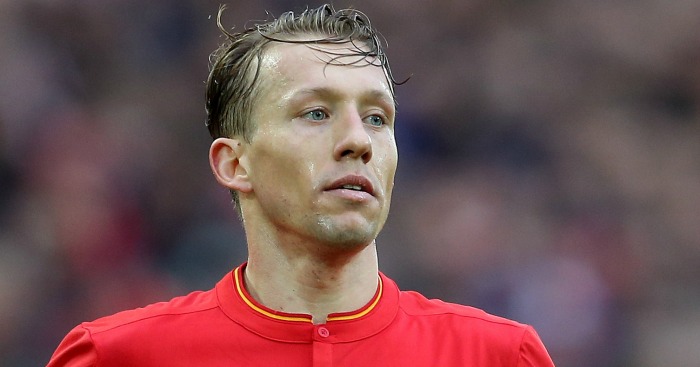 Have you read the winners yet? Erm, have you been secretly working again..?

Lucas Leiva
It strikes me that Lucas is a far easier player for Liverpool fans to champion when he isn’t playing. The Brazilian is the workhorse, the enthusiastic senior player desperate to play in any position he can, and neither of those should be interpreted as insults. The problem is that he’s no longer fit for Liverpool’s purpose, if that purpose is challenging for the Premier League title and domestic cup competitions.

On Saturday lunchtime, Jurgen Klopp rang the changes and will attract criticism for doing so. Yet this was hardly a team filled only with youthful exuberance. Two of the back four were senior internationals, as were two of the front three. In central midfield, Klopp opted for experience with Gini Wijnaldum and Lucas. He might have been better picking the kids.

Lucas has repeatedly stated that he wants to stay at Liverpool but would need more first-team football to do so, but the reality is that appearances are a privilege to be earned, not a right. Watching him being caught in possession, slowly recycling the ball and lacking positional discipline against Championship opposition at least confirmed why he no longer plays in central midfield.

Garry Monk
In a changing, uncertain, dark world, it’s important to be reassured that Leeds United can still fall back into calamity on any given Sunday. Garry Monk’s decision to make ten changes will be questioned, but so too will the depth of his first-team squad after Leeds lost to Sutton United, currently 18th in the National League. Leeds were completely outplayed.

After the game, Monk was keen to stress that his squad needs investment if they are to keep up their impressive league form, but hardly seemed confident in his club’s ability to get deals across the line: “I’ve said it all along we need players. Maybe the club are best to answer when and where that’s going to happen. I’ve said this before today’s game. I’ve been saying it for a while. We need more players. That doesn’t change.”

For all the positivity around Elland Road in the last three months, it’s easy to see dark clouds forming again. Earlier this month, Massimo Cellino publicly told Monk that he would have to work with what he had. Should Leeds not sign any more players before the transfer window closes, supporters will be angry that an opportunity to push for promotion is being squandered. Very quickly, that disillusionment filters down onto the pitch.

Walter Mazzarri
For most of Sunday’s defeat to Millwall, Mazzarri had the look of a man trying to get the attention of someone walking away from a train platform having left their laptop behind. Frantic waving and mouthing of words ended only in a mood of wasted effort.

Mazzarri must be worried that his tenure is coming to a close. The owners’ scattergun approach in the transfer market gives the entire club a sense of transience, but the buck only ever stops with one person. There is a long queue of Watford fans waiting to point out that their manager has done little to inspire with either his tactics or man-management in the last three months, and that Watford are only going one way.

Aleksandar Mitrovic
There is doubt that having Mitrovic in the Premier League last season was good value, just like putting a box of angry hornets into a room full of your childhood bullies is entertaining fare. Mitrovic arrived with a reputation for being that special blend of crazy and talented which makes something certain to happen, but makes the appearance and timing of something entirely unpredictable.

The problem for the Serbian is that he fitted last season’s Newcastle perfectly. The odd goal was matched by unerring accuracy when shooting himself in the foot, and ultimately ended in catastrophic disappointment. As Newcastle beat Tottenham 5-1 on the final day after relegation was confirmed, Mitrovic scored and was then sent off for a dreadful foul on Kyle Walker.

Unfortunately, Newcastle are trying to shake that reputation for catastrophe while Mitrovic is struggling to change his spots. Rafa Benitez has moved him out of the first-team picture with Dwight Gayle and Ayoze Perez more reliable forwards. Mitrovic, who cost £12m, has not been made available for sale, but his future on Tyneside looks bleak.

Even Newcastle fans, who took to to Mitrovic as an instant cult hero, are getting sick of the schtick. The Serbian missed a penalty in the defeat to Oxford and spurned three other presentable chances, while he was spoken to by the referee for reacting to a challenge in the opening 20 minutes. You can add Daryl Murphy to the list of strikers above him in the queue.

Sam Allardyce
Allardyce might not give two hoots about the FA Cup, but a home tie against Manchester City gave him an opportunity to do three things:

1) Improve Crystal Palace’s appalling goalscoring record under Allardyce.
2) Get the home support onside with a stirring performance.
3) Try and eradicate the defensive mistakes that have been haunting Palace.

Allardyce and Palace achieved none of the three. The only teams they have scored against in their last seven matches are League One Bolton in an FA Cup replay and Swansea City in a home game they lost. The home support looks deflated to the point of inertia, and defensive mistakes are becoming as common as Allardyce’s own complaints about refereeing decisions.

“Our game is OK in parts and we look quite comfortable, but then we make errors and the first two goals today proved that opposition of Manchester City’s quality will punish you,” said Allardyce after the game, and there was only one mistruth in that statement: Palace don’t look OK in parts.

A run of fixtures against Bournemouth (a), Sunderland (h), Stoke (a) and Middlesbrough (h) should be the opportunity for Palace to pull themselves clear of the bottom three, but supporters are worried about the opposite occurring. Seven points would ease relegation fears and offer evidence is finally imprinting his style and demands on his squad; four or fewer and a support who was never sold on Allardyce will be doubting his stomach for the fight.