Home Bournemouth Five losers from the FA Cup third round 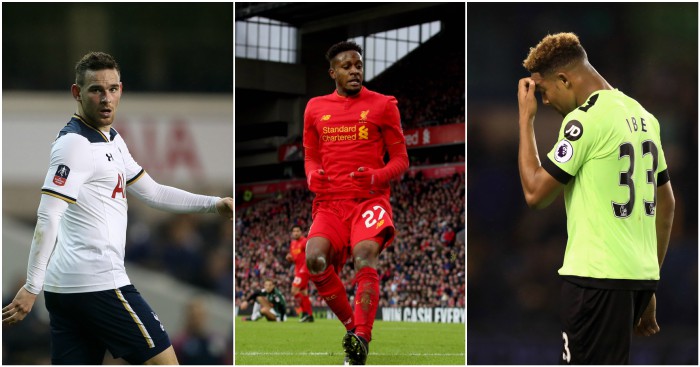 Divock Origi
It is harsh to describe a 21-year-old as a senior player, but also true that Origi had made more Liverpool appearances than the other members of the front four to face Plymouth combined. For that reason, he must take his share of the guilt for the wayward shooting and general lack of invention from the hosts.

This was Origi’s opportunity to play his way into form. Having been dropped by Jurgen Klopp for the last two league games, falling again behind Daniel Sturridge in the Anfield striker queue, this was a chance to score a couple of goals against a League Two side and persuade his manager to pick him at Old Trafford next Sunday. The end result was no goals, three shots, none on target and just 14 completed passes in 90 minutes. Expect to be sitting on the plush seats next Sunday.

Sturridge did 10x more than Origi did, Danny should be a nailed on starter when we play at the old toilet next weekend

“I think the decision wasn’t right. Firstly, he didn’t take the opponent and secondly behind John was Branislav Ivanovic to cover. It’s a pity when this happens. When you get a red card it’s not good, you have to respect the referee’s decision, but in this case maybe we will appeal because the situation is very clear, John didn’t deserve this.”

It was awfully decent of Antonio Conte to stick up for Terry after his sending off against Peterborough United, but that won’t make him any more likely to call upon his services in the next few weeks and months as Chelsea aim to close in on a second league title in three seasons. Even if the appeal succeeds, the challenge was rash and clumsy. Do that in a league game, and it will cost your team precious points.

It was an inopportune time for Terry to make such a mistake. This was his first start since October 26, when Chelsea lost to West Ham in the EFL Cup, and before that it was September 11, when Chelsea drew with Swansea. Terry needed to show that he could still be useful, but only succeeded in proving the opposite. With Kurt Zouma finally returning from injury, Terry is now the fifth-choice central defender at a club that decreasingly feels like home.

An afternoon to forget for John Terry as he sees red on his return to the @ChelseaFC starting XI. #EmiratesFACup https://t.co/BXhxQcrJs7

The euphemisms grow in number. ‘Difficulty settling in’, ‘acclimatising to the league’, ‘works hard’ and ‘finding his feet’ have all been used plenty of times, as has that age-old description of the non-scoring striker: ‘He’s doing fine work outside the penalty area’.

The growing suspicion is that Janssen is not up to the task of being the back-up striker for a Premier League title hopeful. His 607 Premier League minutes have produced only seven shots on target and one goal – a penalty against Leicester. He has created 11 chances in that time.

Afforded a rare start against Championship opposition, Janssen was rotten. The game changed in Tottenham’s favour after his withdrawal, and his remit between now and May will be restricted to the occasional cup foray. Harry Kane will be tucked up every night into his custom-built cotton wool bed, like a giant prize hamster.

33 – Excluding penalties, Vincent Janssen has had a total of 33 shots without scoring in all comps; the most of any PL striker. Wayward.

Jordon Ibe
You might remember that in July 2016, Jamie Redknapp boldly stated that Jordon Ibe was a better natural talent than Raheem Sterling. In case you had forgotten, here’s the quote:

“I’d like to see him add more goals to his game but I think he’ll be a fantastic signing and especially given he will be working with Eddie Howe and Jason Tindall, who get the best out of young players. Bournemouth is a great place to learn and develop and he fits what the club wants. Before you know it, he could be in the England squad. I think he has more natural ability than Raheem Sterling. Anything Raheem Sterling struggles with, Jordon Ibe can do.”

I can think of 49 million reasons why Redknapp may have held that view, but it’s not going well for his man. The £15m signing has not started a league game since November 5, and was abject as Bournemouth crashed out of the FA Cup to League One Millwall on Saturday.

“He hasn’t been a regular in the team and that will be a disappointment for him and for us.” Eddie Howe said of Ibe after the game. “I still feel there’s a lot of potential in there, but obviously he’s got to fulfil that when he gets chances like today. We picked players that we haven’t seen regularly in the Premier League, we gave them an opportunity to express themselves. Individually they are very good players so I was excited to see it. Obviously the reality proved different.”

That’s as cutting as it gets from nice guy Howe. More ‘Ibe leave’ than ‘I believe’.

Jordon Ibe muscled off the ball by a league one defender says all you need to know.

Giannelli Imbula
From one record transfer to another, and things are going south very quickly for Stoke’s £18.3m January 2016 signing. Imbula was highly-rated as a teenager, but it’s telling that there was no competition from elite clubs when Stoke moved in.

Imbula’s move from Marseille to Porto in summer 2015 was supposed to see him kick on and push for a place in the senior France squad. Instead he lasted just six months, revealed that he was unsettled and then engineered a move to the Premier League. It afforded the midfielder an opportunity to establish a glowing reputation. It’s not gone well.

There’s no doubt that Imbula saw Stoke as a stepping stone to better things, following the same path as Morgan Schneiderlin, N’Golo Kante, Georginio Wijnaldum and Victor Wanyama in moving to a less glamourous Premier League club before impressing and earning a move within the league. Unfortunately, Imbula missed out the impressing part. Having been left on the bench eight times in the league this season, the Frenchman was hauled off at half-time as Stoke lost 2-0 at home to Wolves. Cue angry response from Mark Hughes.

“You can read into Bojan and Imbula,” Hughes said. “They weren’t making an impact and we needed to change things. That’s the top and bottom of it.” The Frenchman’s best hope might be outlasting Hughes at Stoke and impressing a new manager.