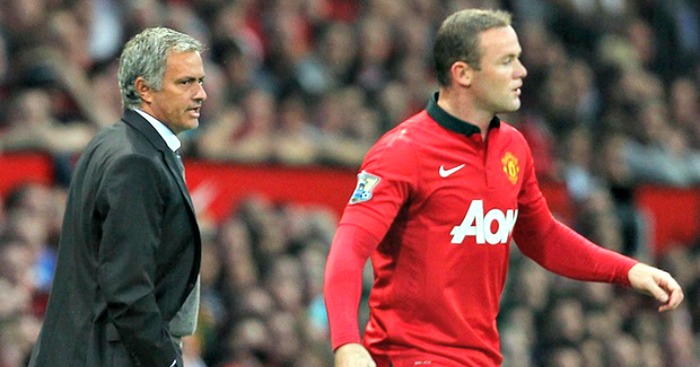 We have brought you five Manchester United players who would dread Jose Mourinho when his expected appointment as manager comes to fruition. Time for five who will relish his arrival…

“I’ve always said he’s a player that I like very, very much but I cannot say more than that. Being fast and direct, I like him very much but he’s a Man United player.”

In praising Wayne Rooney back in July 2013, Jose Mourinho offered the final sentence as a caveat. Then Chelsea boss, the Portuguese simultaneously fluttered his eyelashes at both player and club, but acknowledged his employers at Stamford Bridge. Mourinho had pursued the striker throughout that summer, with Chelsea lodging three bids for the United captain. All were rejected, Rooney remained, and Mourinho won the league with the Blues the following season.

Mourinho planted the seed two-and-a-half years ago, and when strong rumours of his appointment at Old Trafford come to fruition, he will be able to harvest the results. Rooney is not the player he was in 2013, which was in itself a regressed version, and he no longer even plays in the same position, but Mourinho would still relish a union. United head into a new era in need of experienced, senior players. Rooney is a rare commodity in that regard. Mourinho is positively enamoured with the 30-year-old.

There is, after all, a reason Mourinho openly pursued Rooney two years ago, before settling for Diego Costa as his forward. The England international even emerged as a Chelsea target when Mourinho was manager as late as this November. The two are a perfect match, both personally and on a footballing level.

Schneiderlin would be perhaps the biggest beneficiary if Mourinho were to replace Van Gaal. Remember Nemanja Matic before 2015 happened? Schneiderlin can be even better. The Frenchman’s physical traits, allied with a perceptive reading of the game, would make him Mourinho’s midfield lieutenant. Just as he should be.

Ashley Young
It has been a strange season for Ashley Young. To outlining his desire to become a striker, to mass ‘bemusement’, to Roy Keane and Chinamen, to being ‘mildly horrified’, Young has gone from one of Van Gaal’s trusted water carriers to bit-part player in the space of one campaign. Only five players started more Premier League games for United in 2014/15 than Young; that figure becomes 12 this season; 15 have played more minutes. He has undeniably suffered a loss of status, but is Mourinho the man to restore him? The 31-year-old offers versatility, reliability and a resolute defensive outpost. And not too much of an attacking outlet. Just how Mourinho likes his wide players. He will be no regular starter under the Portuguese, but should feature more often than he has under Van Gaal.

Phil Jones
‘The next Branislav Ivanovic’ sounds like the most underwhelming transfer target of all time, but it could be used to describe Phil Jones. The defender has been plagued by his own versatility in the early stages of his career, being used at right-back, centre-half and even defensive midfield during his four years at Old Trafford. Such issues beset Ivanovic upon signing for Chelsea in 2008. At 6ft 1 and boasting the league’s biggest ar*e (sorry, Wilfried Bony), the Serb hardly looks like a right-back – unless you are Graeme Souness. But he has become a mainstay in that position for a (former) Champions League club. With Mourinho known to favour taller defenders like the continental Tony Pulis he is, Jones would surely be right up his alley. Providing the broken, gurning pieces of his broken body can be glued back together, he can become the man of means once more.

Ander Herrera
One Spaniard would certainly not welcome Mourinho at Old Trafford, but another might. Juan Mata has already fallen foul of Mourinho’s iron rule once before, but Herrera could have more success in that regard. The 26-year-old has found regular opportunities difficult to come by under Van Gaal, but his passing range, combined with hard work and guile, make him the closest thing to Oscar that United have. Herrera has shown the briefest of glimpses of what he can do at United, but might provide the hard-working creator that Mourinho craves. With Rooney in a deeper-lying midfield role, Marouane Fellaini used as sparingly as possible and Mata busy blogging about the Manchester weather, the No. 10 role could belong to his compatriot.