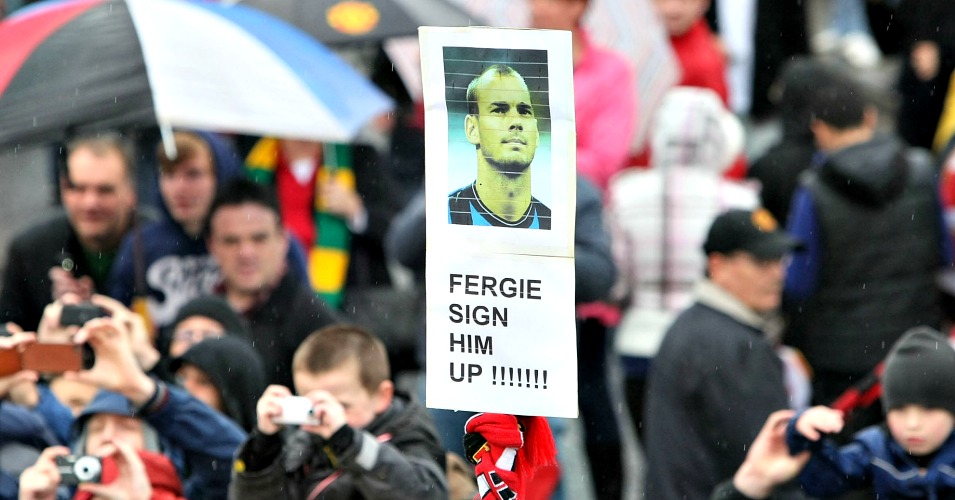 Wesley Sneijder: The daddy of recurring transfer rumours; Sneijder is a unique case of a player who has been linked with all three modern-day iterations of United under messrs Ferguson, Moyes and Van Gaal. Sneijder was first linked with United by the Daily Telegraph as part of a swap deal with Cristiano Ronaldo headed to Real Madrid back in 2008, and the Dutchman has been linked with the Red Devils every year since, right up to The Guardian‘s report that United were interested as late as April this year.

Cristiano Ronaldo: Whether he’s being described as a ‘449-goal superstar‘ or simply a ‘world-class forward (not Messi)’, Cristiano Ronaldo has been linked with a return to Manchester United every summer (and most winters) since leaving in 2009. It started with Goal.com‘s report of United’s ‘astonishing bid’ to re-sign the Portuguese in 2010. That did not happen.

The Daily Mirror ‘EXCLUSIVELY’ claimed that United would ‘smash the world transfer record’ in order to seal Ronaldo’s return in May 2011. That also did not happen.

The forward’s refusal to sign a new Real contract in late 2012 led to both the Mirror and the Daily Mail getting very excited, and while that did not happen, David Moyes did the subsequent summer. The Scot was allegedly promised by the club’s board that Ronaldo would be joining in 2013. He didn’t, and every transfer window since has seen some ‘fresh report’ of interest from United.

Gabriel Batistuta: Former United chairman Martin Edwards actually blocked Alex Ferguson’s move for Batigol in 1997, and the Argentinean was linked with a move to Old Trafford every year thereafter until about 2001. Ferguson reportedly had a straight choice to make between signing Batistuta or Ruud van Nistelrooy back in 2000, which is around about the same time he scored a rather ridiculous goal against the Red Devils in the Champions League.

Pavel Nedved: The BBC reported Nedved as almost certain to join United throughout 2000, while Sky Sports were among those who claimed the same in 2001 before Nedved left Lazio for Juventus. Also…

@DavidHartrick @F365 Nedved to Man Utd too. Remember ITV announcing it as 100% done during the 98 World Cup.