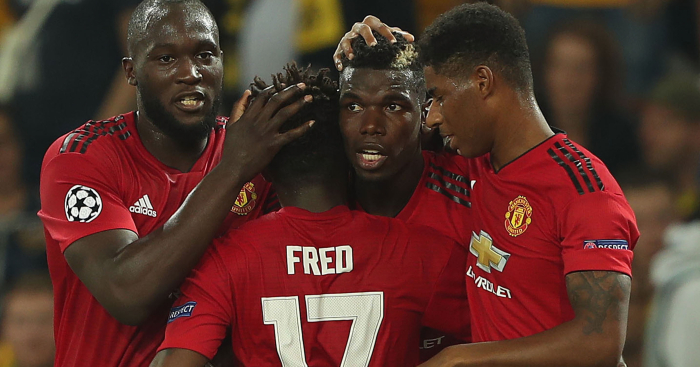 Of course, we also have five United players who will be sorry to see him go…

Paul Pogba
Pogba’s camp are claiming that Instagram post less than 20 minutes after Mourinho’s exit was announced was scheduled by sponsors and was in no way a reaction to the big news. Regardless, it wasn’t the smartest idea given the circumstances the record signing has found himself in over recent weeks. Regardless of whether it was unfortunate or ill-timed, Pogba will be absolutely thrilled to see the back of Mourinho.

The bad blood is said to go way back but only this season has the relationship appeared irretrievable. It must have stuck in Mourinho’s craw to see Pogba metaphorically wipe his arse with the vice-captaincy before it was swiftly wrenched back barely a month later, during which time the record signing admitted facing Brighton with a poor attitude, while claiming that he would be fined if he gave an honest opinion on the manager’s tactics. Then he came out with it anyway.

Pogba has split the United support. Some fans reckon he has been suffocated by Mourinho; others have lost patience with their prima donna midfielder. There’s merit in both standpoints but either way, the new manager will have an £89million midfielder rejuvenated just because he’s not Jose Mourinho. It’s up to Pogba now to demonstrate that Mourinho was the problem all along.

You do one as well !

Anthony Martial
Among the many battles Mourinho waged last summer was the fight he picked with Martial over his decision to take some unauthorised parental leave during United’s USA tour. Martial was fined a week’s wages and the manager was ready to sell the Frenchman, according to Ed Woodward, at least.

A thawing in the relationship appears to have taken place since the summer, largely because Martial has been among United’s most encouraging performers. The 22-year-old is United’s leading scorer this season with eight goals, having started nine of United’s 17 Premier League matches. Mourinho was seemingly willing to tolerate the Frenchman he perceived as flaky, so long as he was producing the goods.

But as a consequence of Mourinho’s sacking, Martial will be feeling rather more positive about the contract extension that United triggered not 24 hours before the manager’s departure. Like Pogba, Martial now has to prove that his largely underwhelming performances over the last 18 months are solely down to the manager.

Alexis Sanchez
Happy birthday, Alexis. The Premier League’s best-paid player will no doubt be stepping up his rehab from a suspiciously timed hamstring injury with rather more vigour now Mourinho is gone.

Sanchez has been absolutely wretched since moving to Old Trafford last January and reports suggested he was ready to move again this winter after getting the hump over Mourinho’s refusal to accept such woeful performances. Before getting crocked in training, Sanchez was dropped from the match-day squad for the Young Boys game and the manager was honest about the reason why.

The scrutiny on Sanchez is different to that which Pogba and Martial endure. The Manchester United public are largely more unwilling to accept the Mourinho excuse from the Chilean, but this clean break may offer Sanchez an opportunity to start again at United. If everybody is willing to forgive and forget all that sulking, that is.

Eric Bailly
Mourinho’s first signing – for £30million from Villarreal – has been reduced to a bench rotation role this season, despite the manager spending the last few months bemoaning the lack of quality among his defenders and the fact that they have their worst defensive record in 56 years.

After some experimentation, Mourinho opted for Chris Smalling and Victor Lindelof as his best-of-a-bad-bunch pairing, with Bailly, Marcos Rojo and Phil Jones sharing bench duty. Bailly only had himself to blame after being bullied by Glenn Murray in August, and that was seemingly the final straw for Mourinho. The centre-back didn’t start again until six games later, when he was hooked after 19 minutes with midfielder Scott McTominay moving back to take his place.

Bailly has been linked with a move in January, with Spurs and Arsenal supposedly interested, which suggests the 24-year-old isn’t a complete write-off. Mourinho had made his mind up but Bailly has the chance to impress a new manager, so long as he can limit the chaos in his defending.

Romelu Lukaku
The Belgian was always one of Mourinho’s most trusted lieutenants – until recently. Lukaku went on the record on a number of occasions to praise Mourinho’s ‘realness’ in comparison to other perma-positive managers, one of whom United are apparently desperate to recruit in the summer.

Recently Lukaku said that Mourinho’s treatment was nothing that a ‘grown-ass man’ couldn’t handle. But then he started to get a dose. The £75million recruit of 18 months ago paid for bulking up to the size (and developing the first touch) of a bus with his first-team place, which was as secure as the old Old Trafford last season.

Lukaku wasn’t in four of Mourinho’s last eight Premier League team selections at Old Trafford, while his inclusion at Valencia indicated his falling status in the manager’s eyes. And don’t forget how dire he was at the Mestalla…

Belgian Proximus 11+ pundits have taken lukaku’s touches vs valencia and compiled them into 1 video. This is the result: pic.twitter.com/yU3LWqYtut