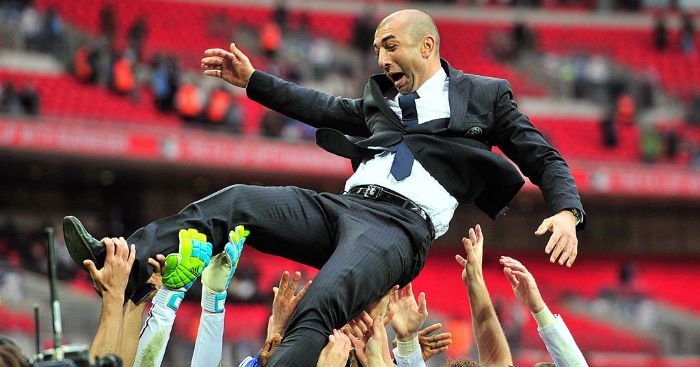 Frank Lampard and Mikel Arteta won the FA Cup six times between them as players; they are now both bidding to win it as their first trophy of any kind in management. Ahead of the showdown on Saturday, we have taken a look at all of the managers whose first taste of silverware in England or abroad came with success in the FA Cup final. It’s not exactly a determiner of future success…

Joe Royle – Everton (1995)
Everton beat Manchester United 1-0 in the final to leave the Red Devils trophyless for the first time in six years. In the 25 years, two months and eighteen days since, United have added a further 22 trophies to their cabinet; Everton have added none. But this last taste of success was a significant achievement for the Toffees, who finished the 1994/95 Premier League season just five points above relegation and 38 behind the team they defeated at Wembley.

The game was long on tension and short on quality, but it had its moments, as all Cup finals do. The sight of Peter Schmeichel wandering aimlessly in the centre circle with his goal under threat as his season turned to dust; 37-year-old Neville Southall producing a double save to show why it wasn’t quite time to put him out to pasture; and Joe Royle heading in Paul Rideout’s winner for him from the bench before aiming a cheeky wink at Alex Ferguson.

Ruud Gullit – Chelsea (1997)
The man Ferguson described as a “clever little so-and-so”, Gianfranco Zola, became the first and only Premier League player to win the FWA Player of the Year award without featuring for a full season, on the eve of the final. And his sublime back-heel volleyed assist for Eddie Newton’s goal may have earned more plaudits had his compatriot not stolen the headlines.

Roberto Di Matteo ran from his own half before larruping a dipping shot from 25 yards in off the underside of the bar inside 45 seconds – the fastest goal in FA Cup final history before Louis Saha’s 25-second strike against Chelsea in 2009. Juninho, Emerson and Fabrizio Ravanelli were in the already relegated Middlesbrough team that played their part in one of the classic FA Cup finals.

It was Chelsea’s first trophy for 26 years in Gullit’s debut season as manager. He was sacked midway through his second with the club in the quarter-finals of the Cup Winners’ Cup, the League Cup and second in the league – the Chelsea trigger fingers were twitchy even before Roman Abramovich arrived. Perhaps not overly on this occasion though: Gullit’s subsequent success was only in making Alan Shearer very, very angry.

Harry Redknapp – Portsmouth (2008)
For the first time in 13 years, the FA Cup had a winner outside what was then the Big Four. Portsmouth defeated Championship side Cardiff City through Nwankwo Kanu’s tap-in following Peter Enckleman’s second most infamous goalkeeping error. The Finnish stopper parried John Utaka’s whipped cross straight into the path of Kanu, who reacted quickly to stick it back past him.

The previous summer, Redknapp and Pompey spent over £50million on the likes of Jermain Defoe, Glenn Johnson and Sulley Muntari, adding Peter Crouch shortly after the Cup victory. The madcap spending induced financial difficulties, administration and relegation from the Premier League in 2010. Was it worth it?

It was Redknapp’s first and only trophy as manager. He did then go to Tottenham – what did he expect?

Roberto Di Matteo – Chelsea (2012)
Roberto Di Matteo should have ended his managerial career on the back of one incredible fortnight as caretaker at Stamford Bridge. Chelsea’s greatest ever night in Munich to win the Champions League was preceded by a 2-1 FA Cup victory over Liverpool.

Lampard in particular should remember this one with fondness. It was his beautiful first touch and perfect through ball that allowed Didier Drogba to score his customary Wembley goal and the eventual winner. Ramires had opened the scoring for Di Matteo’s side with a lung-busting run and finish that wasn’t quite dink over Victor Valdes good, but good enough. Andy Carroll fired high into the roof of the net following one of the most inelegant stepovers of all time, but it turned out to be a consolation as his late headed effort was somehow clawed off the line by Petr Cech – one of the great FA Cup final saves. He would be nowhere near this list.

Context matters. This was in the last few minutes of the FA Cup final with Chelsea 2-1 up.

Petr Cech followed up this save from Andy Carroll by saving saving three penalties in the Champions League final.

Di Matteo was sacked by Chelsea in November, just five months after the greatest two weeks in the club’s history. He was then paid £130,000-per-week for two more years by the club before brief, ineffectual spells in charge of Schalke and Aston Villa. He was never going to top it anyway.

This was by no means a smash-and-grab affair against Sergio Aguero, Carlos Tevez, David Silva, Yaya Toure and the rest of the City stars. The Latics had an even share of possession, the same number of shots and Calum McManaman rang rings around the City defence, in particular Pablo Zabaleta who was sent off for two cynical fouls on the winger. Ben Watson’s 88th-minute header wasn’t against the run of play, it was precisely what Martinez and his side deserved.

The Spaniard also led Wigan into the Championship that season, but his stock was high enough to encourage Everton to hire him the following summer. The Toffees achieved their highest ever points tally of 72 to finish fifth in his first season but two hugely disappointing campaigns followed; they came 11th on both occasions.

But he got to the Belgium national job flier before Marco Silva, Mark Hughes, Alan Pardew, and the rest of the Results Don’t Matter boys club, and has spent a couple of years leading the most talented squad in world football in further mediocrity since.