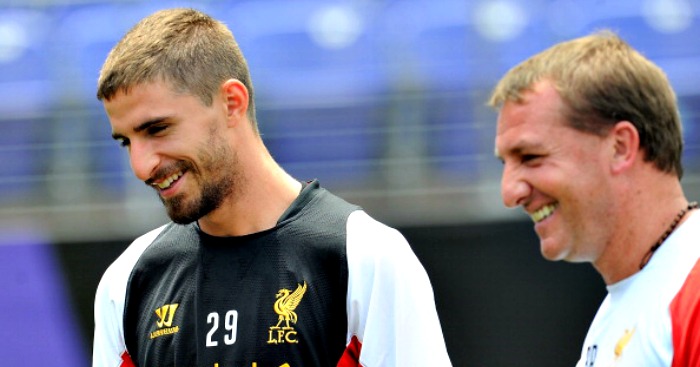 Inspired by Neil Warnock handing his old mate another job…

Neil Warnock and Paddy Kenny
The connection between Neil Warnock and Paddy Kenny is so strong that it actually cost a man his job. When Dougie Freedman saw fit to hand Kenny a permanent contract at Bolton in September 2014, he became the first manager to do so whose name could not form an anagram of ‘Colin W*nker’. Freedman was fired a month later. It is unclear whether this was due to him breaking football’s 11th commandment.

From Bury in 1998, to Sheffield United in 2002, to Queens Park Rangers in 2010, to Leeds in 2012, Kenny was Warnock’s trusted lieutenant. The two have shared a journey from League Two all the way to the Premier League, and subsequently back down again. Warnock endured a time in footballing purgatory after being sacked by Crystal Palace in 2014, leaving Kenny’s role in the sport uncertain. From 2014 to 2016, Kenny made just three league appearances across four clubs. But bonds cannot be broken, and barely a week after being appointed Rotherham manager, Warnock made Kenny his second signing. Love conquers all.

Harry Redknapp and Niko Kranjcar
Harry Redknapp is certainly a creature of habit. The name ‘Niko Kranjcar’ could easily be replaced with ‘Peter Crouch’ or ‘Jermain Defoe’ in terms of his clear favourites. Redknapp signed Crouch on three separate occasions – for Southampton, Portsmouth and Tottenham – and openly courted him while QPR manager. Defoe also played under Redknapp at three separate clubs – West Ham, Portsmouth and Tottenham – but Kranjcar is ‘Arry’s true love.

“He’s a top class bloke. He can do things and he’s got great ability, and he’s fitter now,” Redknapp said of Kranjcar in 2014, presumably discussing his footballing ability. Redknapp had just signed the Croatian midfielder for QPR, reuniting him with the player he had previously bought for Portsmouth and Tottenham. Kranjcar left Spurs to join Dynamo Kiev on June 6, 2012. This seemingly brought on a love-induced rage from Redknapp, who was sacked exactly a week later. Even now, Redknapp and Kranjcar are protesting against the powers-that-be who wish to quell their relationship. Both are free agents in name only; they are not in the market for new partners.

Sam Allardyce and Kevin Nolan
The year is 2046. The established elite of Ryan Giggs’ Manchester City and Liverpool, whose managerial dream team of Rafael Benitez and Kenny Dalglish remain cryogenically frozen, sit atop the Premier League table. Brendan Rodgers is struggling to keep Coventry City, now renamed Character City, safe from relegation. Jose Mourinho is still waiting by the phone for a call from Manchester United, who have recently replaced Steve Bruce with Darren Ferguson in their quest to hand every former Alex Ferguson player the managerial job. In 12th place, comfortably and happily mid-table, sit Fleetwood Town. Their manager is Kevin Nolan.

If Sam Allardyce is ever to anoint his heir, that man would be Kevin Anthony Jance Nolan. The former champion of the ‘Will They Ever Get An England Call-Up’ Mark Noble Invitational has since branched out into management, but his is a career intertwined with Allardyce’s. Nolan’s first season of professional football came at Bolton in 1999-2000, coinciding with Allardyce’s first year as manager. The two brought about Bolton’s most successful period in recent history, before Allardyce left in 2007. Only crossed wires prevented them from reuniting at Newcastle; Nolan joined almost exactly one year after Allardyce resigned as manager. But they could not be kept apart for too long. When Nolan left Newcastle in 2011, there was only one possible destination. Allardyce had been appointed manager at Upton Park on June 1, 2011. On June 16, Nolan joined him.

Big Sam considered signing Nolan in the summer for Sunderland, but opted instead to let his youngling fly the coup. Nolan was appointed player-manager of League Two Leyton Orient instead. Nolan has endured a mixed start to life in management, ranging from victories over promotion-chasing Wycombe and Portsmouth, to a heavy home defeat to leaders Northampton and a reverse against mid-table Cambridge. Three wins, one draw, one loss, three clean sheets; his mentor would be proud.

Brendan Rodgers and Fabio Borini
“Fabio fits the model of what we’re trying to do in building not only for now, but also for the future,” said Brendan Rodgers upon unveiling his first signing as Liverpool manager in July 2012. “He is arguably the best physical player I’ve worked with in terms of his pace, power and fitness. I’d anticipate that over the next two or three years he’ll really progress and I’m sure do very well for Liverpool.”

Rodgers was likely expecting a better output than three goals in 38 games for Liverpool when he bought Borini from Roma for £10.5million. The two had worked together during Rodgers’ time as a Chelsea Academy coach in 2008, and Borini impressed on loan for Swansea in 2011 when Rodgers was manager of the Welsh club. After a brief spell in Italy, Borini returned to the Premier League by the orders of his Northern Irish saviour. We’re just waiting for Sunderland to appoint Rodgers as boss, with Allardyce moving to Leyton Orient as director of football.

Peter Taylor and Junior Lewis
They say familiarity breeds contempt, but Peter Taylor and Junior Lewis prove the exception to the rule. Taylor signed Lewis on five separate occasions as a player: Gillingham in 1999, Leicester in 2001, Brighton in 2002, Hull in 2004 and Stevenage in 2007. Wherever Taylor went, a transfer for Lewis was not far behind. When Lewis moved into coaching in 2008, Taylor appointed him as Reserve Team Manager at Wycombe, before becoming coach at Taylor’s Bradford City in 2010. Seven different clubs, ranging from the old Second Division to the Premier League, but none of them could break one special bond.