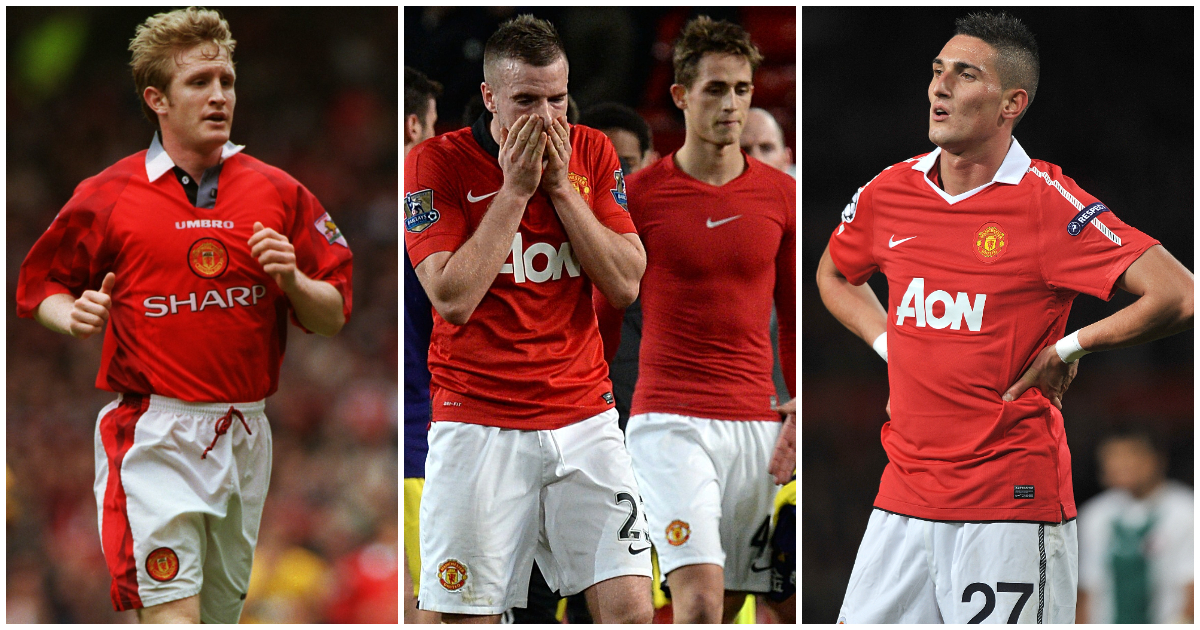 Adnan Januzaj lining up against Man Utd this evening brought to mind a few other academy graduates who, like the Belgium winger, never justified the hype at Old Trafford…

John Curtis
The versatile defender was touted as a future England captain, which was a fair shout given Curtis had skippered the Three Lions at every youth level up to Under-20. He went to Lilleshall as a youngster and hoisted aloft the FA Youth Cup in 1995 alongside Phil Neville.

But despite his accomplishments at youth level, Curtis became yet another prodigious talent who couldn’t make the leap to senior football – certainly not at United. He made his Premier League debut in the 1997-98 season, the first of eight appearances that campaign before another four the following year when United won the Treble.

But that was it for Curtis. He took a step down by joining Barnsley on loan but never the steps back. He became a Football League journeyman, representing Blackburn, Sheffield United, Leicester, Portsmouth, Preston, Nottingham Forest, QPR, Wrexham and Northampton before moving to Gold Coast United in Australia.

Not that Curtis looks back with any regret.

“I am sat here in America, overlooking my garden and will get a glass of wine in a minute – I don’t have regrets,” he told Portsmouth paper The News last year.

“How do you even measure success? One person’s gauge will be entirely different to someone else’s. I consider myself a success and that’s really all that matters. You can look back on any situation in your life and think about doing things differently. No doubt you could be much better with the ladies at school if you went back…”

Federico Macheda
The Italian played 36 games for United and scored five goals. But one game – his debut – and one goal defined his Old Trafford career.

Macheda moved to Manchester from Rome, where he was brought through the ranks at Lazio. But United tempted him and his family to England, and after a sticky start, the striker made rapid progress from the Under-18s to the reserves and, in April 2009, the first-team bench.

United were going at it with Liverpool at the top of the league and, with Wayne Rooney suspended, Dimitar Berbatov injured and Carlos Tevez recovering from international duty, Sir Alex Ferguson was light on strikers. Macheda and Danny Welbeck were dispatched from the bench with United chasing the game and, in added time, Macheda did this.

It's Federico Macheda's birthday today. That goal against Villa was good, wasn't it? #MUFC https://t.co/E6Egz6wmS5 pic.twitter.com/7HTPGAm7Au

Topping that moment, or even maintaining such a rapid ascent, was always going to be tough, and though he netted the winner at Sunderland the following week, Macheda failed to justify the hype which went into overdrive after his stunning introduction to the Premier League and earned him a four-year contract. He went on loan to Sampdoria – ‘the worst mistake of my life’ he later admitted after struggling in a side eventually relegated – before subsequent spells at QPR, Stuttgart, Doncaster and Birmingham prior to the expiry of his United deal.

Aside from his Sampdoria regrets, Macheda admits he could have done more to achieve his potential at Old Trafford. “Maybe I was just happy to be there,” he told ESPN in 2017. “Maybe I didn’t push myself to the limit to make the next step because I felt that I had the faith of the manager – Fergie loved me. I was happy with my life but maybe I was too happy – with a big contract – and should have pushed myself a lot more.”

To be fair to the midfielder, it wasn’t his fault the hype around him reached levels he had little chance of ever justifying. Having paid his dues in loan spells with Leicester, Watford and Wigan, Cleverley made a splendid start to the 2011-12 season. He came on at half-time in the Community Shield with United 2-0 down to Man City and he played a starring role in the Red Devils’ stunning fightback.

That earned Cleverley the opportunity to start the season in Ferguson’s midfield and for three-and-a-quarter games, he looked like he belonged at that level. United beat West Brom, hammered Spurs and pulled Arsenal’s pants down before battering Bolton.

“From the moment I came on against City in the Community Shield to the moment I went off injured at Bolton, that was a special time. I find it hard to remember enjoying football more,” he reflected recently to United’s official website.

Ah, the injury at Bolton. Halfway through the first half at The Reebok, Cleverley sustained a foot problem which prompted an apology from Kevin Davies. In his words: “I was never the same that season.”

Before that became clear, he was given a new four-year contract and his reputation ran away with itself. With a Paul Scholes-sized void in their midfield, many United fans allowed themselves to believe that Cleverley was the answer. He missed only five Premier League games with that injury but another sustained on his return to the side, when Ferguson labelled his performance as ‘outstanding’ at Everton, kept him out until well into the New Year. By which time, United had filled the Scholes vacancy with Scholes himself.

Cleverley was a squad player in Ferguson’s final season, when he picked up his single Premier League title winner’s medal. Then David Moyes arrived, and so too did Marouane Fellaini.

Louis van Gaal’s appointment offered Cleverley some encouragement. It was thought the Dutchman’s system would suit the midfielder and he captained United in the new manager’s first pre-season. But Van Gaal’s judgement was swift and brutal. Cleverley played only a single Premier League game before being farmed out to Aston Villa on loan.

He found it tough at Villa and another straight-talking Dutch manager, Ronald Koeman, told Cleverley it wasn’t going to happen at Everton either after he had moved to Goodison Park on a free to be reunited with Roberto Martinez.

Watford, to save you a Google.

Ravel Morrison
Plenty has been said and written about the most talented player never to make it at United. Wayne Rooney said of Morrison: “He was brilliant. He was confident… I saw Paul Pogba come through, Jesse Lingard, all these players, and Ravel was better than any of them by a country mile.”

But, as Gary Neville put it, there were “significant complexities and challenges in his life that any of us would have found difficult to deal with”. The former United captain insisted Morrison wasn’t culpable of a lack of work rate or a bad attitude.

Rio Ferdinand felt United could have done more for Morrison to help him achieve his potential as ‘a £100million player’. Ferdinand also helped just this week to offer further insight into Morrison’s character and how highly regarded he remains by many connected with the club.

I text the boss (Sir Alex) this morning asking him for 5 words on @morrisonravel…. the response I got gave me goosebumps! @ManUtd #MUFC #VibeWithFive pic.twitter.com/2cEd8GzaDq

Unlike the other names on this list, Pogba has certainly made a name for himself at Old Trafford. But only the staunchest of Pogba’s fanboys could claim that the club’s record signing has fully met the expectations placed upon him.

Ferguson certainly felt let down by Pogba when he chose to leave the club in 2012. Pogba’s argument would be that he was the one let down by a lack of opportunities but Ferguson was happy to see the back of the young midfielder and his ‘s***bag’ agent.

Ferguson’s exit cleared a path back to Old Trafford for Pogba when United made their academy graduate their record signing in 2016. But, as Jose Mourinho will doubtless testify, Pogba has brought more grief United’s way, despite fleeting glimpses of what the World Cup winner is capable of.

Pogba has teased us again with some recent performances between a wretched start to the season and another injury lay-off. The arguments over who is to blame for the 27-year-old failing to fulfil his potential will rage long after Pogba has departed United, which may well be this summer.